Fig - another Myth but this one is true!

A while ago, I wrote an article on Figs: Myths and Mythstakes which focused on the forbidden practice of winter pruning a hardy fruiting Fig shrub (oh yes you can), and the fully accepted concept of these Figs not fruiting on anything younger than 2-year old wood (oh yes they do).

But there's another myth which I forgot to mention because I didn't think of it at that time, and that's the one about the dangers of Fig sap.

There are many species of Ficus, ranging from our fruit-producing Common Fig - Ficus carica - through a wide range of houseplants: all of them have sticky white sap, and all of them are toxic.

Now, when dealing with plants and the internet, you quickly realise that the terms "poisonous" and "toxic" are used interchangeably.  I  normally use poisonous to mean something that, if you eat it, will make you ill/dead, and toxic means that it will hurt you in some way, physically, on the outside, as it were.

In this case, Fig sap appears to fall into both categories, as there are mentions on the internet of houseplant fig leaves being poisonous to dogs: and certainly all types of Ficus have sap which contains furanocoumarins, those pesky chemicals I wrote about at length in the newest eBook, Horrors of the Hedgerow (now available on Kindle Unlimited for free, folks! And only a couple of quid otherwise, well worth it!)

If you don't know what furanocoumarins are, they are chemicals which, on contact with our skin, make it photo-sensitive. That means sensitive to sunlight. Doesn't sound too bad, I know, but in real life it leads to horrific blisters, and subsequent scarring - and can leave the unlucky person with a long-standing sensitivity to sunlight. No more sunbathing! No more going outdoors without covering up the affected areas - it's no joke!

So why am I writing about Fig sap, today?

Well, after carrying out the drastic Fig pruning referred to above, my Trainee and I cut the debris up into wheelbarrow-sized chunks: 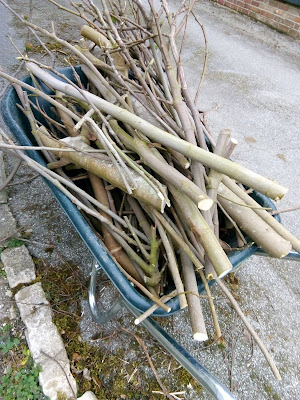 then raked up all the debris, made the area look as neat as we could, and went on to work in another area, full of the satisfaction of a job well done.

When we were packing  up to go home at the end of the morning, I noticed that I had a big sticky patch on my leg, just above the knee.

I grabbed a wet-wipe from my car, and tried to scrub it off, but it was quite resistant to the wet-wipe. But I didn't think anything of it. That was on the 19th March.

A couple of days later, I noticed that there was a discoloured patch of skin where the sap had been.

I didn't think anything of that, either: I assumed that the sticky patch had just picked up some dirt: not unusual for a gardener wearing shorts, after all! 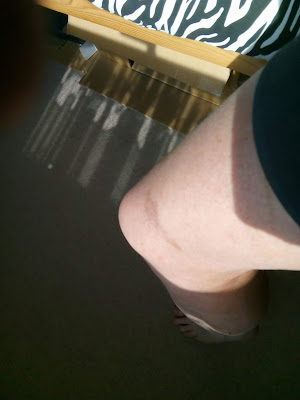 Here we are - right - on the 15th May!  Two months and many, many hot showers/baths/attempts to scrub it off, and I still had a dark stain on my leg, where the sap had been.

So there you go, there is indeed truth in the suggestion that Fig sap can be nasty stuff!

From my point of view, it didn't hurt at all: it was stinging slightly on the day that I did it, but that could well have been because I'd been scrubbing at it with a wet-wipe.

I didn't have any blistering, or itching, or feeling sensitive, nothing at all.

So to me, Fig sap is not something that I'd be particularly careful about, as it doesn't seem to do me much harm.

But we are all different, and some of you might react much more painfully, so heed my advice and be careful when pruning your hardy outdoor figs: wear gloves (I always wear gloves! And eye protection!) and do try not to get it on your bare skin.

Has the stain completely faded yet? *rolls up trouser leg to check* Not entirely! It's now the following January, and if you know where to look, you can still just about see it, so that shows that it can take ten months or more for the effects to fully fade!
Posted by Rachel the Gardener at 16:11