Back in February I spent a very productive morning installing a new Willow Fedge - straight and simple, nothing complicated, but hopefully it will be the start of something much bigger. More of that later...

Right, first things first: what's a Fedge? It's a cross between a fence and a hedge. Usually made of Willow, sometimes referred to as Living Willow. The concept is very simple: you plant a row of willow wands (or "branches"), you weave them together, and you end up with something as good as a fence, but which is as alive as a hedge. Each year you cut them right back to the bone, to reveal the original framework, so in winter you have something decorative, rather like an ornate trellis. And in summer you have a wildly fluffy, green hedge. What could be simpler?

What is the secret of making a good Fedge? As with many things in the garden, preparation is key, second only to "start with decent materials" and then followed by "ongoing maintenance".

The preparation means lifting a strip of turf - it's best to remove all the competition, and grass is hungry stuff - and laying down a strip of water-permeable membrane. This helps to suppress the growth of weeds, and the re-growth of grass. 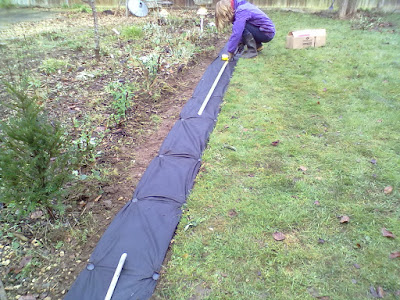 Here is my Client, measuring carefully and making slits in the pegged-out membrane, at regular intervals.

She bought a "kit" of materials, having simply told the supplier how long the Fedge was going to be - and they calculated how many of each thickness would be required. Very easy!

On arrival, the willow wands were unpacked and stuffed into a dustbin of water, cut ends downwards. This keeps them fresh and alive until you are ready to install them: obviously, the sooner after delivery the better. 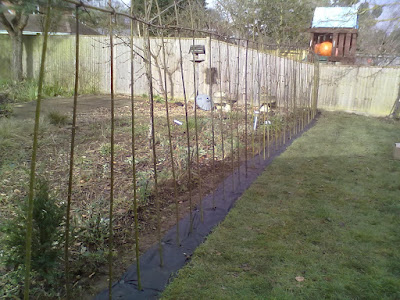 In go the first row of stout uprights.

It's very easy - you literally just push them into the ground, through the membrane.

Once you have done all the uprights, the instructions on the kit tell you to tie a row of "binders" along the top at head height. This keeps the  uprights all the same distance apart, and helps to keep them upright once you start the weaving.

When I am making Fedges, I prefer to do the weaving before the binders, as it's a lot easier to do the "over under, over  under" routine with the loose end of the weaver being able to slide in-between the uprights, rather like those agility dogs you see going between the bendy poles.

But it is a lot harder to keep the Fedge upright if you do it that way: easy for me, because I have done any number of them, but much less easy for a beginner and as, this time, I was demonstrating how to do it so that my Client could do other Fedges by herself,  I thought it best to follow the instructions and do the binders nice and early. 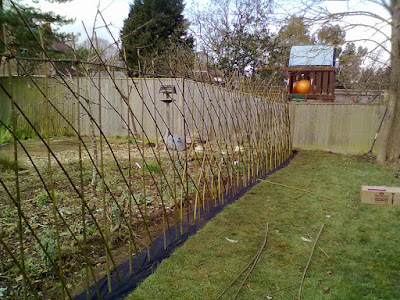 Having done the binders, we start the first row of diagonal weavers.

"Over, under, over under!" we chanted as we worked.

Yes, it really is that easy.

The tricky part is getting to the end and coming back the other way - it's easy to get "lost" in the over-unders, and ending up on the wrong side of an upright.

Frankly, this isn't critical: by the time the leaves have arrived,  you won't be able to see any minor mistakes in the weaving.

When all the weaving was done, then came the job of tying in all the joins, where they cross: this helps to strengthen the Fedge for these first few weeks, while it is starting to grow, and it helps the branches to graft themselves together, which is what gives a Fedge its strength. Yes, those individual thin willow wands will "glue" themselves together where they cross, and as they grow the Fedge will become stronger and stronger.

Tying in is our chance to even up the lattice, making the gaps as regular as we could. And that's all there is to it. A bit of snipping of odd sticky-out ends, one last check that all the junctions were tied, and time to clear up the debris and have a cup of tea. 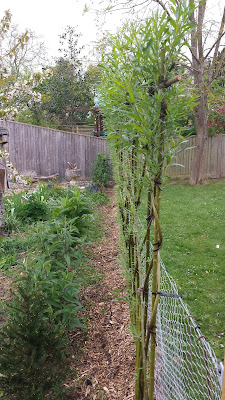 And here is a photo of the Fedge in  April, greening up nicely!

As you can see, the Client has installed an additional chicken-wire fence - this is to keep the chickens on the grassy side, until the Fedge has thickened up enough to work as a hen-proof fence. I know it doesn't look as pretty, but it's only for the first year or two.

So what were those three points again? Firstly, start with decent materials: don't think that you can chop a few branches off a handy Willow, and make yourselves a beautiful Fedge for free.

The kits that you can buy online are from the "right" species of Willow, which is long, thin and flexible. Buying a kit ensures that it all the same species, so it all grows at the same rate - if  you chop a few bits off one Willow and a few off another, you'll end up with something of a mish-mash, with some sections growing tall and thin, with others trying to grow bushy. Plus they might well be different colours, although that is not a bad thing in itself. More to the point, it is very rare to be able to find "free" Willow wands that are both long, and thin: the frustration of trying to weave over-stiff branches quickly makes you realise the value of buying in the right materials. And of course it becomes a crop: you buy them once, and for ever afterwards you get an annual crop of prunings which you can use to build more Fedges, or to make willow sculptures, or to weave plant supports: you could easily recover the cost of the materials over the next few years!

Second point, Preparation: clear the ground in a strip, and make life easier for yourself by laying down membrane, which helps to suppress weeds around the very base of the willow.

Third and final point, "Ongoing maintenance". At installation, water it well. For the first year, water it well. Willow is thirsty stuff, and the more you water it, the quicker it will grow.  Keep the base as clear of weeds as you can: not only does that reduce competition, allowing the Willow to use all the water and nutrients available, but it looks nicer!  The "ongoing" part is the annual maintenance: at some point over the winter, go over the whole Fedge with secateurs and trim off all the long new growth, leaving just the original lattice. I know these seems cruel, but it's  not like a tree that we want to grow and grow: we want it to stay more or less the same size. Left  unpruned, every single wand will turn into a tree, which would be a bit overwhelming in a garden.

Having pruned off the new growth, inspect the lattice to see if there are any dead wands: it's perfectly normal for a few of them to fail to grow,  or to grow well at the bottom, then die off a bit higher up. When you spot one, all you do is take one of then pruned-off wands, and slide it through the lattice to take the place of the dead one. Work it right down to ground level and push it as far in as you can, water well, and with luck it will "take" and will replace the dead one. I reckon to do a dozen or so replacements every year for the first few years, it doesn't take long and you don't have to buy any new willow, as you have your own wand-producing factory already in place!

And as mentioned, all those leftover wands can be used for other projects. In the first year, they are likely to be quite spindly and not very long, but after the second or third year, you will be getting a crop that is equal in size and quality to the wands that you originally bought.

You can let the top grow a little higher, if you want more shelter or privacy, but don't let it grow unchecked otherwise you end up with a hideous mess like this one: 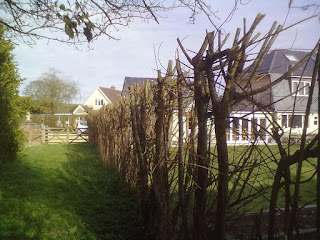 This train-wreck of a fence (which adjoins one of my Clients' gardens) has not been trimmed every winter for several years, all they do is lop off the top growth, and they don't bother to check the lattice at all.

So instead of winter giving us an attractive trellis-like thing to look at, we have this rather  ugly, top-heavy thing with huge gaps in it.

And of course it gets worse every year, as the top knobs get stronger and stronger, while the lower growth gets weaker and weaker. They are, in effect, pollarding it so in a few more years, they will have a line of single willow trees, instead of any sort of fence. What a waste.

So there you have it: how to install a simple willow Fedge, how to maintain it, and how to enjoy a living fence in summer, an attractive trellis in winter, and an ongoing source of free willow!

Did you enjoy this article? Did you find it useful? Would you like me to answer your own, personal, gardening question? Become a Patron - just click here - and support me! Or use the Donate button for a one-off donation. If just 10% of my visitors gave me a pound a month, I'd be able to spend a lot more time answering all the questions!!
Posted by Rachel the Gardener at 09:19