I've written about Irish Yew recently, and now another strange case has come to my attention.

A Client of mine has a beautiful double avenue of slender Irish Yew: 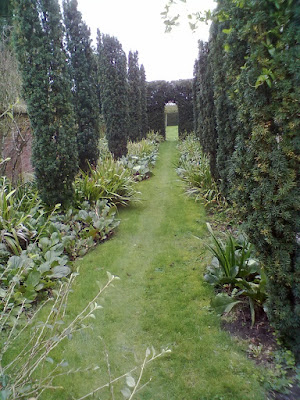 ...there, aren't they lovely? Marching down the grassy path, with a solid ordinary Yew hedge at the end, and an arched doorway cut in it.

It doesn't get much better than this..

But I noticed something odd about one of them. 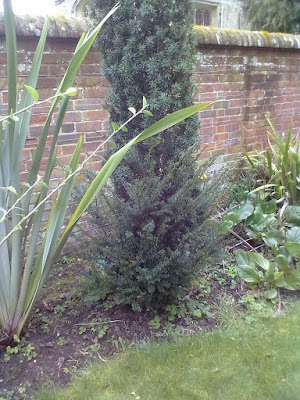 Uurgh, what's that untidy growth at the bottom?

They are not supposed to do that!

Close inspection showed that there were two stout stems arising from the base of the tree, which were not Irish Yew but were ordinary English Yew.

It's quite a good illustration of the difference between them: they are both Yew, but the English Yew branches are sprouting off in all directions, and even in this photo, you can see that the individual leaves are not crisply curling, the way that those of the Irish Yew are.

This is not the first time I've seen this: I was visiting Snowshill Manor a year or two back (don't bother: there's hardly any garden worth the word, people go there to look at the house and the eclectic contents, apparently)  and found this: 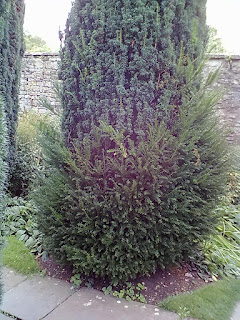 It's exactly the same problem, a fastigiate Yew with a sprouting bunch of "ordinary" Yew at the base. I'm sure I've seen another one somewhere else, at another public garden, but I can't find the photo.

Anyway, you see the problem: the "wrong" plant is growing at the base.

And the entirely "wrong" way to deal with it is to do what the useless gardeners at Snowshill Manor did, and attempt to clip it into the same shape as the fastigiate Yew.

As an aside, this is something that (professionally) drives me mad: paid gardeners not doing a proper job. It's perfectly ok for the owner of a garden to bodge it up in any way they please: it's their garden, it's their time, they might do something which I consider to be horticulturally inept, but I am most likely to just laugh a little bit (sometimes behind my hand, to be polite) and let them get on with it.

But it's a different story when a gardener is being paid to work there, and - in my opinion - should be expected to know the difference between plants, and how to deal with problems like this. Not to take the easy option of running the hedgetrimmer over it.

OK, enough of me grumbling: what, then, is the "correct" way to deal with it?

The "correct" way is to remove the "wrong" shoots as soon as you find them, long before they turn into an eyesore and need repeated clipping for the rest of their life...

Here's the sequence of events: 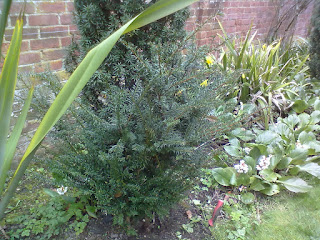 Here's my slender upright Yew, with tufty-tail at the bottom. Taking hold of those branches, and pulling them gently outwards, I could see that there were two individual branches of the "wrong" Yew, springing out from below soil level at the base of the tree.

I tried to clear the soil away from them, to see if they were individually rooted, or were just suckers off the original tree, springing out from just below ground level - a lot of grafted plants do this, it's very annoying and needs to be dealt with firmly by removing those suckers from as low down as you possibly can. Just cutting them off at ground level won't work: the stumps will send up more shoots than ever. You have to rip them off from their base: sometimes this is easier said than done. 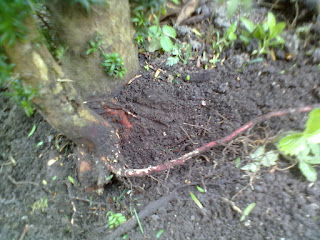 Here's the first one: it seems to me that this is a separate plant, it has a thin root going sideways as well as a big thick one going downwards.

But I couldn't get it away from the main roots. 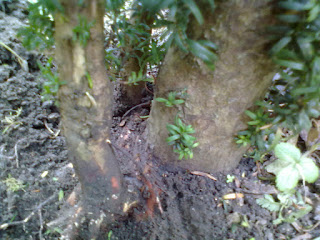 Here - right - is the same root from the other side, and you can see "wrong" shoot number two, between it and the thick original trunk.

Again, I can't separate the roots - I can't find a gap to push the daisy grubber into.

On the one hand, this could indicate that the "wrong" shoot is a reverted sucker: it could equally well indicate that it's a seedling which has become grafted to the original tree's roots as it grew. 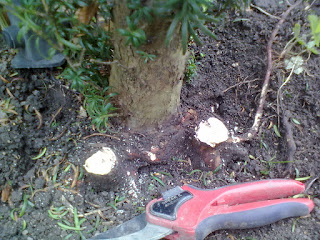 As I can't get the shoots to pull away from the original trunk, all I can do is saw them off as low as possible, and here are the two front shoots, newly sawn.

I will now keep an eye on them through the next season or two, looking out for regrowth, and removing any that I find.

If I knew for certain that they were separate entities, I would dab some glyphosate weed-killer on the cut faces of their stumps, but as the roots do seem to be welded together, I can't risk doing that.

So, where does that leave us? The row of fastigiate Yews now looks correct again, with no rufty tufty English Yew trying to push its way into the arrangement: and I will be checking it every so often and removing any regrowth that I find, until those "wrong" shoots run out of energy and give up trying.

The question I am left with, though, is this: are these non-fastigiate shoots a case of the plant reverting, in the same way that variegated shrubs often through out a plain green shoot or two? Or are they actually seedlings which have dropped very close to the parent (fastigiate) Yew, and haven't been noticed as they grew?

I'm definitely in favour of the seedling theory.  I know that Irish Yew trees are very nearly all female: they bear the berries, which is how you can tell, but this means that they are normally pollinated by English Yew. I know that they rarely if ever come true from seed - the seedlings are overwhelmingly ordinary English Yew. I know this from my own experience, as well as from researching it, as I have weeded out about a million Yew seedlings from around the base of Irish Yew, and not one has ever grown into Irish Yew, they have all grown into normal English Yew.

So, in my opinion, it seems quite possible that some of the seeds will fall very close to the trunk of the Irish Yew, and would easily be overlooked when it came to weeding, to the point where they look as though they are shoots from the original tree. This is what I think happened here, but I can't tell for certain as all the roots are intertwined.

So now I am on the look out, every time I see Fastigiate Yew, for small shoots of the "wrong" Yew, small enough for me to be able to pull them out by the roots, if indeed they are on their own roots!

Posted by Rachel the Gardener at 10:41