In case you didn't know, Irish Yew is a mutation of the normal Taxas baccata, where instead of becoming a stately, spreading tree, it grows very strongly upright, and the individual leaves are slightly curled all the way round the twig, giving it a lush and bushy appearance while remaining a very tightly upright tree.

And yes, it was first found in Ireland, hence the name.

It  has many uses,  being as strong, hardy, long-lived and tough as normal Yew,  and it is very handy for instances where you wanted a line of Pencil Cedars, much  loved in Italianate style gardens, but the weather isn't mild enough!

They start off as skinny little things, but if left along for long enough, they get bigger and bigger, and turn into massive upright columns.

At this point, the owner  usually - cursing their ancestors who planted the darned things - resorts to massacre with a chainsaw.  Sometimes you get an interim measure, if they have a half-way decent arborist (formerly known as "tree surgeon" but honestly, what a pretentious name for it: "surgeon") who will strap the tree horizontally with bands of wire to keep the growth tight against the trunk.

Personally I hate this, but not as much as I hate seeing people use hedgetrimmers on the upright sides... but that's just my personal opinion. 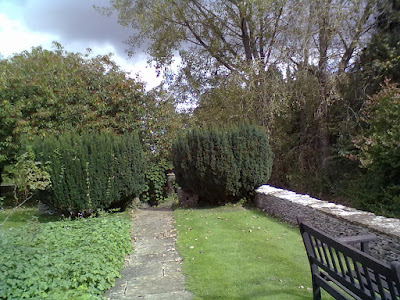 Anyway, back to the massive columns: what people normally do is just lop the top off, like this pair of unfortunates at Rodmarton House (left).

I suppose it does reduce the overall looming-ness of them, but it's still a squeeze to get along that path.

Being Yew, they take this as a challenge and immediately start growing again on the top, where they've been cut.

Yew is one of the few conifers who will do  this - will grow new green leaves from bare old wood from inside the canopy, and this is one of the reasons it is so enduringly popular!

With these two, I could see that they were growing around the rim - you can see the tufty new tips quite clearly.  But would they grow inside the canopy, I wondered, in the way that normal Yew does? 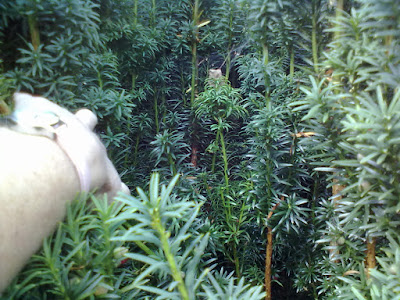 As there was no-one around, I hopped up on that low wall, leaned over, and took a photo of the "inside" of the tree.

Lots and lots of it.

So now, I wonder, if we have established to our satisfaction that Irish Yew will indeed spring renewed from bare old wood if you cut it.. why don't people with overweight Irish Yew columns cut off the outside branches, as well as lopping off the top?

Logically, this should work: expose the original trunk all the way down to the ground, and it should all sprout new twigs, thus creating a much slimmer shape than just lopping the top off.

All I need now is a trusting owner who will let me have a go at doing it!!