Recently, a friend asked me about a problem she was having:  some mature roses were in the way of some unavoidable construction work. She asked if it was possible to move the roses, so that they could be replanted once the builders had gone.

The answer is "yes - probably!"

And by coincidence, I found myself doing exactly the same thing a couple of days ago, so I took some quick photos as I did it, on the basis that a picture is worth a thousand words, and it would save me quite a lot of typing if I could illustrate the job as we went.

Right: first job, cut down the top growth of the roses in question. Why? Firstly because any large transplanted shrub is going to struggle at first, so it is a kindness to remove some of the burden of foliage. Or, to put it another way, it will probably panic and drop a lot of its upper foliage anyway, on the grounds that all those leaves are just too much to support: so we might as well do the job for it. Secondly, for the comfort of the poor gardener who is being asked to dig it up: roses have thorns (technically, prickles, but I am not wearing my Botanist hat today, so we'll let that one go) which can make it extremely unpleasant to work close to them.

So, firstly, cut back a lot of the top growth. Aim to end up with something about knee height and yes, you are going to lose all those lovely flowers, so take them inside and put them in vases! Cut off enough of the outside "ring" of branches that you can get fairly close to the roots without being slashed to death.

Don't waste the bits you cut off, though: you can use them for cuttings. Look it up online if you're not sure, but it's basically choose pencil-thick sections, push five or so cuttings (each a good 8" long) around the edge of a pot of soil/compost, water them gently, let them get on with it for a year or so. Keep the pots watered, but not soaked.

Take a lot of cuttings from each rose: two pots of five cuttings I'd say, and don't forget to take photos of the roses and label the cuttings according to the photos. If they have name labels, so much the better, but if not, use your imagination: at the very least, identify what colour they are. This will be your back-up, in case moving the plants is not a success.... 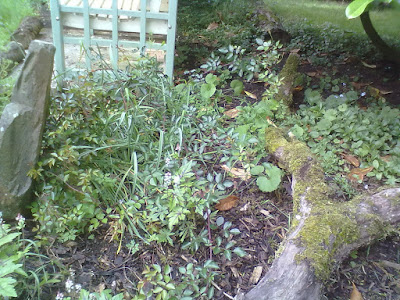 Here's what I was presented with: a climbing rose which had sadly lost its supporting tree, and was far too big to be allowed to regrow in this position.

Most of it had been cut off when the tree fell, but it had regrown a lot of whippy shoots -and a fair amount of weeds, as you can see!

In this case, my first job was to chop off the wildly long growth so I could get close enough to weed it. 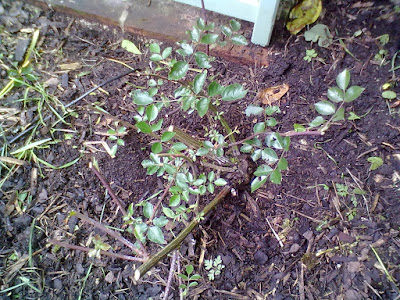 Here is phase two: weeds removed, growth cut back to something manageable.

Now we get the spade out, and cut vertically downwards in a circle around it. 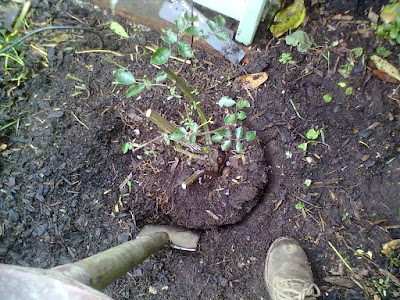 As soon as I started, I realised that there was one stout branch that was still too long: I'd retained it because it has three or more good strong shoots coming from it. But it was no good, it was in the way, so it had to go.

Here you can see me starting to dig in a circle around the plant.

Dig straight down with the spade, a full spade depth, or more if you can. Then start working across, under the rose: try to get as big and complete a rootball as you can.

Use loppers/secateurs to cut off roots as you meet them: you are not going to be able to get all the roots out, so it's better to cut them cleanly than to try to lever each plant out, ripping the roots as you go. 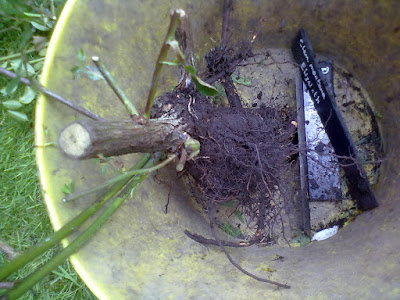 Having removed this one, normally you would carefully retain the root ball: but in this case there was a lot of couch grass running through it, so unfortunately I had to shake off all the soil in order to get the roots of the couch grass out.  This is sub-optimal, as it exposes the roots and damages the fine ones, but there's no point trying to replant something which is infested with a perennial weed!

Here is the plant in my bucket: please note that I  have brought along the labels as well -  it's always good to keep the labels with the plants!  In this case I only had the one to move, but if you have several different roses to move, then write out labels and tie them to the remains of each rose as you go.

As this one has  been cruelly stripped of the soil, I filled the bucket with water and left it to soak for 20 minutes or so - which also gave me the opportunity to check that all couch grass roots had been removed. 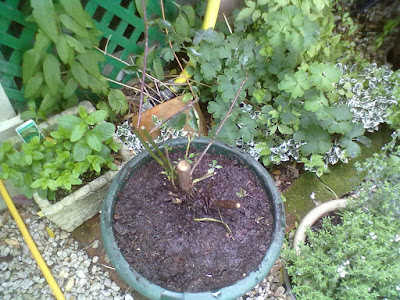 Then it was time to pot it up and water well.

It will now sit outside somewhere safe, until needed: the owner will keep it watered and, with luck, it  will survive.

If you are simply moving the roses, then obviously you don't need to pot them up, they can go straight to their new home which you will have prepared before digging them up: clear the ground where they are going to go, dig it over well, make sure you have removed any nasty perennial weeds such as bindweed/ground elder/couch grass etc: dig in some home compost or some well rotted manure in preparation and dig the hole ready, so that as soon as you lift the rose, you can trundle it straight over the the new place, and plant it. Water well, and keep an eye on them for the following few weeks, watering as necessary.

Although generally speaking, it is always best to have plants firmly in the ground, in some ways, it is not a  bad thing if you have to pot them up: it gives them the time to die, if they are going to die, before you expend the energy to replant them: and it's often easy to forget about a transplanted shrub, whereas if they are in pots, you will be more likely to keep an eye on them.

If you do have to pot them up, here are two Tips for watering: having radically pruned and root-pruned them, they will be a bit delicate for a while, so water them gently, don't drench them - get some drip-waterers, those gadgets which you fit onto an empty squash bottle, and which allow water to penetrate slowly and gently.

Second watering tip, get a squirty spray bottle, and when you've filled up the water bottles each day, "mist" the foliage with water. Don't feed them at this time, just let them re-establish their roots in the pots.

But it is well worth the effort to try and keep them.

Posted by Rachel the Gardener at 10:36