Last week I had one of those jobs that makes me grin with glee - the Client asked me, very tentatively, if I would be prepared to "have a go" at the Woodland Glade: but only if it was okay with me?

It is not very big: just a grove of very ordinary trees - Field Maple, Sycamore, Hawthorn, Ash, some Yew, a ton of ivy, and an old paved path running through the middle. Over the years it has been a bit neglected, and now the path is very narrow, the ivy is very dense, there is a strong underplanting of nettles and brambles, and frankly it has turned from "Pretty Woodland Glade" to "Eeyore's Gloomy Place" so I was sent in for the morning, to sort it out. 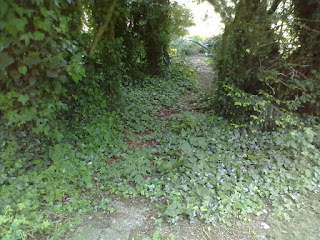 Here is the "before" picture: to be honest, I think it has a certain "Sleeping Beauty" charm of its own, but I can see the point that it's not as inviting as it could be.

Not to mention those nettles and brambles.

That was easy enough, just pull and chop the ivy: pull it out of the actual path, digging out the roots where it was infiltrating the gaps, then cut off long streamers that were meandering across the edge.

My aim was to leave just enough to soften the stone edging, but removing all the trip hazards. Once I could see the path properly, it needed a bit of intensive weeding in the gaps between the slabs, and a good sweeping.

Next job: deal with the vicious underplanting. Nettles are easily removed, brambles need a bit of digging, but they weren't too bad and didn't take that long to get rid of.

Now that I could move around under the trees, it was time to remove ivy from the trunks.

Ivy on the ground under the trees is sort of acceptable, I suppose (grudgingly) and is a lot cheaper in money and time than doing a decorative underplanting, which would then require maintenance to keep it lovely. But ivy up trees is unforgivable: it makes the trees top heavy, stressing their structure: it covers their lenticels, making it harder for them to "breathe", it hosts a myriad of insects, many of which are not good for trees, and which damage the bark: in winter, when the tree expects to be bare, it is instead still fully clothed, and the ivy acts as not only as a sail to catch the wind, which causes damage to the tree and the roots, but also it holds on to rain, creating damp microclimates all around the trunk and branches, which is not a good thing.

And it's ugly! And full of dust! I love to see the shapes of trees, the trunk, the bark, the way the branches come out at different angles - so much to look at. But when covered in ivy, all you have is an amorphous blob, which sheds dust and debris on you.

So, for all these reasons, Out With Ivy!

Once the worst of the ivy was gone, I could see a few dead branches and one entire dead tree, so they were snipped, lopped, and sawn off, heaved out and trundled up to the bonfire pile. Then there was time for a little cosmetic work, trimming back a few overhanging branches to allow a bit more air and light in, while retaining the rather nice "enclosed" feeling.

By now, the path itself had dried out somewhat, so it had another good sweeping, and lo! and behold: 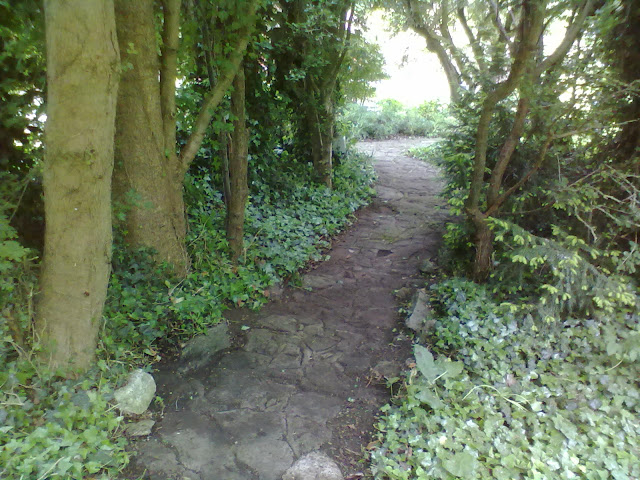 Much better!
Posted by Rachel the Gardener at 10:21