Further to my various posts on this topic - starting with one back in July 2014 when I first round and rescued a very neglected Salix caprea 'Kilmarnock' on a local industrial estate, then another article about Pruning of Small Weeping Trees, which covered Weeping Pear - a lady called Maria e-mailed me, and asked me whether her 'Kilmarnock' was dead, as it had no leaves on it.

This is in early June, and no matter whereabouts in the UK Maria's tree is, it really ought to have leaves on it by now! I asked her for photos of the tree, and here it is: 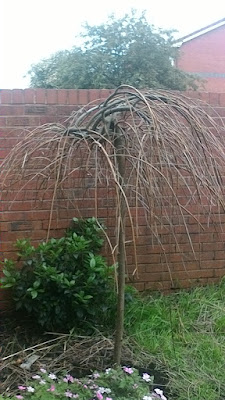 If you look closely at the head of branches, can you see how many of them are a pale brown, straw-like colour?

That means they are absolutely, definitely, dead.

Three years ago, if I'd been presented with a tree like this, I would have immediately told the Client that it was dead, and to dig it up and throw it away. However, after my experience with rescuing the one on the Industrial Estate, I do now suggest giving them a second chance, and here are the instructions for Maria, and for anyone else with something which looks like this in the middle of June.

Firstly, get yourself out there with a a pair of sharp secateurs, and look closely at each branch individually. Is it a pale, straw colour? If so, it's dead. Start at the tip, and work your way up the branch, cutting off whatever is dead. If the colour changes - you can usually see a firmly defined tide-mark of a different colour - then hooray, it might have some life left in it, so cut that branch back to just barely above the tide-mark, and move on to the next one.

At the end of this, you should be ankle-deep in dead brown twigs, and the tree is probably a pathetic-looking stump with a knot of stout growth at the top, and quite possibly no springing, weeping, growth at all.

At this point I would remind you of what was left of the "guerrilla gardening" Kilmarnock: 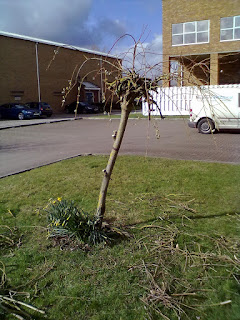 ...not a great deal more than I would expect Maria to have - although in this case, there were six or seven branches which were clearly alive.

So, having massacred all the dead stuff off, I would suggest you clear away all the dead material, ensure that there is a small clear space around the foot of the tree - trees don't like competition, especially from grass - and then give it a good feed.

What does that mean? Look in the shed and see if you have any "Growmore" balanced feed. It can be in granules or powder, or in a bottle. If it is granules or powder, take a small handful and scatter it in a circle around the base of the tree, not actually touching the trunk: take a small hand tool such as a fork, and fluff up the soil where the fertiliser has landed. This helps it to get down into the soil rather than being washed away sideways. Then water it - give it about one watering-can full of water. If you have a water butt, use that: if not, fill the can at the tap and let it sit there for 10-20 minutes to allow the chlorine to evaporate, and to allow the water to reach the same temperature as the outside. The poor tree has suffered enough, no need to shock it further with icy cold chlorinated water!

If the Growmore is liquid, or if you have any liquid Seaweed feed, get the watering can full of water as described, and tip in the right amount of concentrated liquid feed - read the label, and don't be tempted to make it double strength. Then slowly water around the trunk, trying not to splash it up the trunk. If the water runs away across the top of the soil, stop: get a small hand tool and fluff up the surface of the soil. Then start watering again, slowly, and let each slosh sink down before tipping on a bit more. This is all to ensure that the water - and the fertiliser - go down, into the roots of this tree, and not sideways into the roots of the grass and the other plants nearby.

Give it another watering can full of water every day for a fortnight or so, then look very carefully at the remaining top growth. If you can see tiny buds, or better still, actual leaves, then hooray! it's alive!

If not, it's dead, dig it up and throw it away. Buy a new one if you want to replace it - it's perfectly ok to replant the same tree in the same spot, as Willows don't suffer from replant sickness the way roses do.

However, one word of caution: take a step back and look at the place where you planted it, to see if you can see a reason why the original one died. Is it so deeply overshadowed by other trees or by buildings that it can barely see the light of day? If this is the case, the replacement will probably die as well.  Is it so close to a wall of the house that it doesn't get any water?  If so, you will need to pay a lot more attention to the replacement, you might need to water it every week.

If you decide that there is no particular reason why the first one died, give the second one a better chance by enriching the soil before you plant. This means digging an overlarge hole for it: tip in some home-made compost if you have any, or buy a bag or two of farmyard manure (don't use multi-purpose compost, it is too "light" for planting trees), tip that into the hole, and dig and turn it until it is well mixed in. Then lift out enough of it to get the new tree into the hole, and use what you just lifted out to backfill and firm in the new tree.

Kilmarnock, being small, don't usually require staking unless the site is particularly windy.

So there is the Action Plan, for Maria and for anyone else in this situation: give it One Last Chance by trimming off the dead wood, clearing around the base, feeding and watering it. And if all this fails, then it might be time to replace it.....