Hedges: how to recover an overgrown one

I get some interesting challenges in my daily work - and two years ago I was presented with this one - a very overgrown Lonicera Nitida hedge.

It's a small panel of hedging, marking the edge of a property, providing some privacy, and giving some shelter to cars parked in front of the garage.

But it had been allowed to get a bit out of hand, to the point where the garage door wouldn't open anymore! It had grown outwards into a V-shape, with the top being more than twice as wide as the base. This is bad for many reasons, quite apart from looking ridiculous: it is very hard to trim a hedge that leans towards you;  the top overshadows the base so the base often loses leaves and becomes bare and brown, which is ugly; it flops around on windy days, swaying alarmingly and threatening to fall over; and a wide-topped hedge is constantly at risk of splitting open and flopping outwards in heavy rain, or snow. Plus, the garage door wouldn't open any more! As a lesser problem, the neighbours were also complaining that the outside edge was grabbing at their cars as they drove down the lane.... so it was time to do something.

I ran the hedgetrimmer over it as a first fix, pushing back into the hedge as hard as the hedgetrimmer would go, just to see what general shape it was, and yes, it was clearly twice as wide at the top as at the base.

The next job was to trim it back close to the building so the door would open: that was easy enough, I just took the loppers and chopped away a section of it: easy to do, but not a permanent solution, as the hedge now had a big bite out of it, which was not pretty.

So, the main job is to restore it to being a neat, upright, slender hedge. This is a big job and will take the best part of three years, as it has to be done in stages. Doing it all at once would probably kill the hedge, not to mention leaving the Clients looking at a hideous brown stump for months on end.

Year One: cut back just one side of the hedge. This is done with loppers - the hedgetrimmer simply can't get through the thickness of the stems. I do this sort of thing by eye, but if you are not confident of your straight-line abilities, put a peg into the ground and stretch a line to mark where you want to go. I wanted to go back to about a foot and a half inside the boundary of the property, which allows it a bit of growing room between clippings.

Typically, I didn't take any photos of the "before" stage, so I can only show you what it looked like from half way through the exercise, but you will be able to see from Part II what Part I was like. I did this in mid summer - not the best time to do it, I prefer to do this work in spring, so that the bare branches will "green up" as quickly as possible, but the Client really wanted to use their garage again!

By the following May, here is the result: 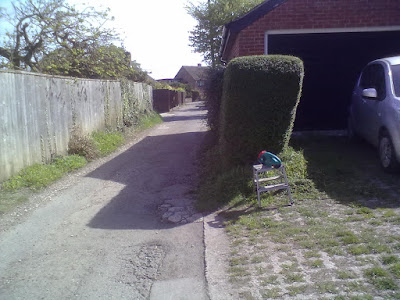 You can see that the outside face is nicely upright, but the inside is still leaning in towards the drive.

Just imagine what it looked like when it was leaning out in both directions!

After six months, the outside had "greened up" enough to need a light pass with the hedgetrimmer. 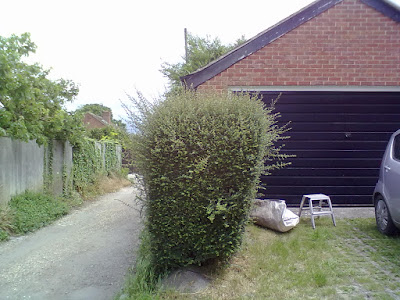 A month later, and you can see that the whole hedge is growing nicely, so it was time to tackle the inside face.

First job - run the hedgetrimmer over the outside face and the top, so I can see what I am working with.

Next job: repeat what I did to the outside. 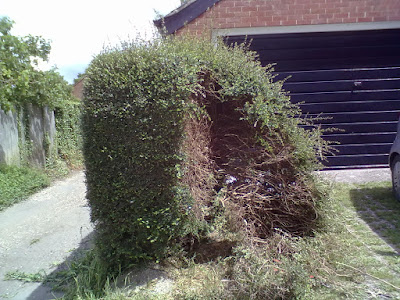 I have started at the front, and used loppers to cut into the hedge at least a foot or more inside it's current edge.

The whole side of the hedge - matted together and impenetrable - is falling away, like shearing a sheep but much, much slower.

I just kept cutting until I met the "step" where I'd cut in to allow the garage door to open. Obviously, when doing this, try to keep the cutting line parallel to the other face of the hedge, and try to keep it vertical. It's not easy! 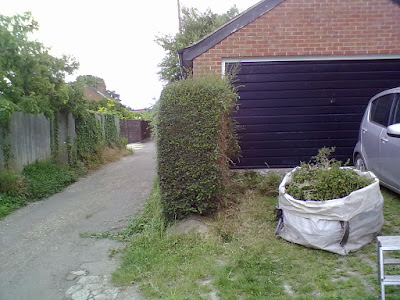 Here's the result after the first pass - nearly enough to fill the yard square builders' bag,  and a horrible brown hedge, all scruffy and ugly.

The message at this point, should you wish to try this yourselves, is "Don't Panic."

I went over the hedge carefully by hand, pulling out any branches which had been severed, but which were still caught up in the "live" part. This is because they will die and go brown, making it look as though you have killed the hedge, so it's worth taking the time to pull them all out, even though it leaves behind a thin, sometimes slightly holey, hedge. The angles are slightly deceptive, the inside face is actually a good six inches clear of the garage door edge, in order to allow the hedge room to grow in between clippings. 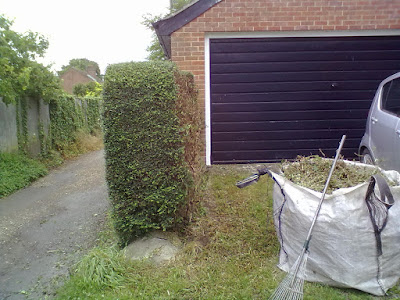 From this angle, you can see more clearly the gap between hedge edge and garage door edge, and you can see quite clearly that it is almost entirely brown and bare.

However, it will soon "green up", and the reason for doing the outside face first is to reassure the Client that it will work! They don't have to look at the outside every day, but they do see the inside face, so it makes sense to do the least visible face first, give the hedge time to recover, and then tackle the side which is seen every day.

This took place last month, and already the bare hedge is starting to sprout.

Stage Three is to reduce the height, I'll be doing that next spring: the garage has a house number on it, which is currently completely invisible, and I aim to get that sign clear of the hedge again. This also means that the hedge will be a great deal easier to cut, as I won't need to stand on the steps to reach the top of it.

As always with gardening, there are a couple of extra things which need to be done: when you cut back a hedge really hard, you need to give it a feed at the time, and I like to keep a hard-cut hedge well watered for the first couple of months, to give it the best chance possible. And it is always a good idea to rake out as much dead material from inside and underneath the hedge as you can: a really vicious chop can give you the chance to clear the base of ivy, weeds and general rubbish, which reduces competition, allows the free flow of air (important to prevent disease) and greatly enhances the appearance of a hedge.

Year One: cut deeply into one face only. Remove all cut branches, shake out and rake out all dead leaves and debris from inside the hedge, clear the base, feed and water.

Year Two: repeat for the other face. Don't forget to feed it, and to water it for a few weeks afterwards.

Year Three: lower the overall height, as much as required.

The top can actually be done at the same time as one of the faces, if you want to get it over and done with - the main reasons for doing it as a third phase are to leave the hedge plenty of green leaves for photosynthesising while it is recovering from each of the major cuts, and to leave the the Client as much greenery as possible for as long as possible. Once both sides are green again, it is much less noticeable if the top is cut off - and the tops of hedges always recover much faster than the sides.

And yes, this technique is used for pretty much all sorts of hedges: evergreen, deciduous, and even flowering hedging such as Escallonia.

So be brave! If your hedge has grown out of control, get on top of it! And just to prove that it doesn't kill the hedge, here is a photo of the scalped edge of the hedge one month later, now sprouting green: 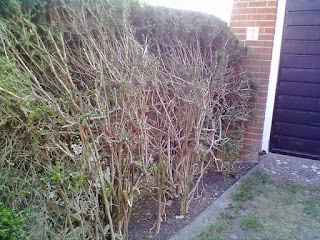 It's not pretty, but it's alive!

Oh, and look, there's the house number, to show how low the hedge used to be. 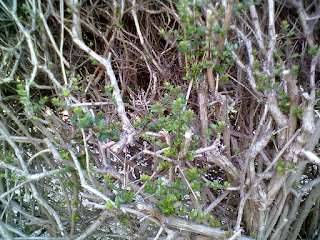 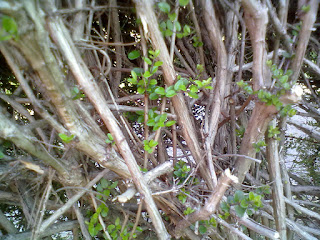 I'll give it another month or so, then any branches or cut ends which haven't produced new growth will be cut out, which will reduce the general brown-ness.

This is the one advantage of Lonicera Nitida hedging - they do recover quickly from a big chop!

Posted by Rachel the Gardener at 07:48