I was asked to move a gigantic clump of Sedum last week, as the builders are due in soon to widen the path, so even though it is entirely the wrong time of year, it was either move it, or lose it.

As usual, when you try to lift a well established clump, they fall apart into several sections, but that's fine, as I was planning to split it up anyway: if you try to move a tall Sedum at this time of year they invariably flop, droop and snap (which sounds like a rather unappealing new breakfast cereal) so it is usually best to split them, cut them down, and just accept that you are going to miss out on flowering for this year.

I was particularly keen to lift and split this clump, as it was infested with couch grass, which had been resisting my attempts to weed it for the last year or more, so this was my chance to get rid of the unwanted infiltrator for once and for all.

In went the fork, out came the clump, falling easily into two main sections. 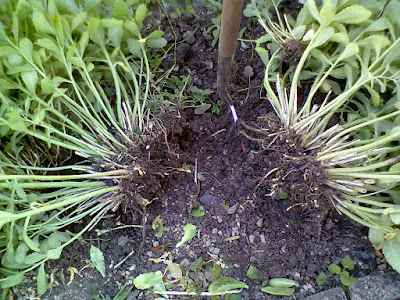 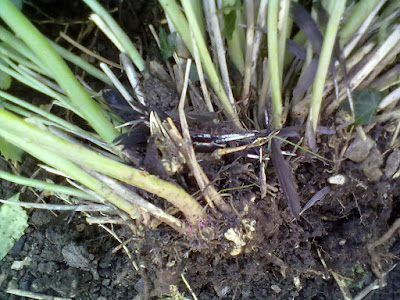 Is it a bird? (It's certainly not a plane, although did I find a small plastic helicopter in my garden at home the other day, presumably a small child was crying somewhere for the loss of their toy) 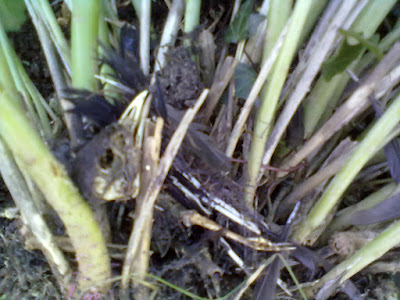 Yes, there was a complete, dead, bird right in the densest part of the plant. Feathers, skull and all, but no contents: presumably they had rotted away and done their bit to promote this year's strong, healthy growth.

Well, I'm familiar with feeding plants with fish, blood and bone, so I suppose that dropping a dead bird in the middle of the plant is no more than nature's way to provide two out of three of those organic fertilisers?
Posted by Rachel the Gardener at 10:45