My recent article about attempting to retrieve a past-its-sell-by-date dwarf weeping willow prompted a question from L'enfant bouffante (Hi Rachel! *waves*) about a problem with an over-large Corkscrew Willow.

Rachel - who presumably is a child with a big, 60s-style hairdo, if my O-level French doesn't let me down - asks my advice about whether she can prune a Corkscrew willow that has grown rather too big for its boots.

Now for the good news: Yes! You can!

Right, here's the botany bit: Corkscrew or Curly Willow is properly known as either Salix babylonica or Salix matsudana (experts can't quite agree whether it is one species with two names, or two different but very similar species) and is not a grafted tree, it just grows like that. This means that there is no reversion from rootstock to worry about, no graft union spotting to do, and as it is a willow, you can prune it with confidence: It Will Grow Back. 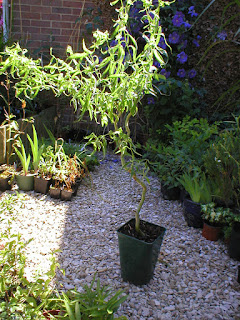 For anyone who hasn't seen one of these lovely trees, here's one I grew from a cutting earlier (left). Obviously, this is a small one.

They are more or less upright in habit, they can get to 30' tall if you let them, and all the branches are wavy, as are the leaves: but unlike Corkscrew or Contorted Hazel, the leaves are merely pleasantly wavy, not hideously malformed and diseased-looking. Not that I'm biaised, you understand, and I do have a purple-leaved Contorted Hazel of my own, which I love: but I really don't like the normal green ones. Well, to be honest, I think they're fabulous in winter, when you can see the skeleton of them, but in summer, frankly, I think those leaves just look diseased. So there.

Right, where were we? Oh, yes, Corkscrew Willow.

Not grafted, upright habit, and it grows nearly as fast as many "normal" willows, and yes, they can easily get too big for their situation.

The good news is that you can chop it as much as you like, and it will probably not mind in the slightest. Bearing in mind that I haven't seen it, I would suggest that if it is close to your house and/or overhanging next door, get a tree surgeon in to do the actual chopping: they will reduce it safely, they'll take away the waste, and they will/should leave you with a shapely, well balanced tree, which will, once it regrows, quickly become beautiful again.

Having said that one advantage of tree surgeons is that they take the waste away, bear in mind that long wavy stems are very much in demand by flower arrangers, so if you know anyone who does this, or have a college with a floristry course nearby, it's worth asking them if they would be interested in collecting the offcuts. Or, trim up a pile of the longest stems you can retrieve on the day,  put them in the garage to dry out slowly,  then sell them! A little gold or glitter spray, bung them in a tall vase and hey presto! instant Christmas decoration. Did I really just say "christmas?" In May? Oh dear.

As well as hopefully recycling some of the branches,  my personal advice is to take cuttings from it before the work is done: chop off a few branches of about pencil thickness, and either pot them up, or push them into the ground, water well, and leave them  to grow:  this time next year, they should be rooted, so you can either sell them, or hold them in reserve in case the big tree does not regrow the way you would like it to.

I should also say that you have several options regarding the style of cutting, which your tree surgeon should discuss with you. You can have it:

1)  crown-lifted and thinned, which means they will reduce the overall height and density, but you will still have a tree:

2) they can "hat-rack" it, also known as "topping" which means they cut off all the main branches at the same distance from the trunk, leaving a hideous truncated skeleton which then sprouts a bushy lollipop of foliage at each tip (not recommended);

3) they can pollard it, which means they chop off every large branch, leaving you with a tall bare stump: it will quickly regrow, it's perfectly acceptable, and this is how street trees are normally treated - but once you start pollarding you will have to have it done regularly for ever more.

4) they can coppice it - like pollarding but at knee height, making it very, very easy to do future maintanance on it.

Those last two are not normally done on ornamental trees, but if they advise that pollarding/coppicing is the best thing for the tree, then so be it. It WILL regrow!
Posted by Rachel the Gardener at 16:36