My article about Salix Kilmarnock retrieval recently prompted a comment from Paul, who asked for advice on pruning his willow, which I assume was originally a Kilmarnock.

He very sensibly emailed me some photos of the tree in question, with views from each side, and we discussed the problem, and hopefully came up with a plan to deal with it, and here are the details, in case you have a similar problem. 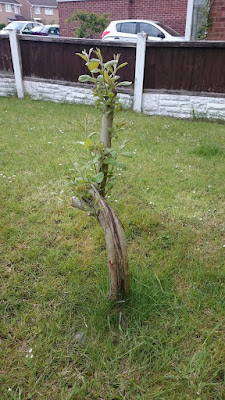 Here it is, poor thing: as you can see, it has a short curved trunk which is badly split, then some fresher growth - from this angle, it appears to be just one stout upright branch, but actually it is one on top of another, with tufts of foliage in odd places.

Clearly, it has been chopped back to size a couple of times: maybe it grew too big for the position, or maybe it was damaged by wind or weather, and has split or broken, necessitating the chopping.

Either way, all the nice weeping shape has gone, leaving just this part.

My first reaction was, obviously, to advise him to start again: dig it out, and buy a new one. Well, let's be honest, my first reaction was to scream in horror, then to laugh, but that's the kind of gal I am. Full of sympathy. *laughs* No, I don't do sympathy, but I do do advice, and my advice was that it's too far gone, and it's better to start again.

But Paul asked me if I would look at it more closely, as he really wanted to keep it if at all possible.

Here's a closer look at that trunk, from the other side; 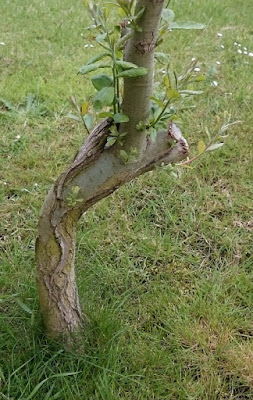 If we assume that the first element IS the original rootstock, then logically, the second element could be the original top-material, the weeping part: but the fact that someone at some  point sawed it off would suggest that this is not the case: also, it is too low to the ground - most weeping trees are made to start weeping at about 4-5' clear of the ground, otherwise the branches don't have room to weep, but have to lie untidily on the ground.

(Having said that, I was recently sent pictures of a weeping willow which did exactly that - lie on the ground - and I still think it was a very unsuccessful thing to do to a tree - sorry, Brenda!)

So, the second element is probably a sucker from the rootstock, which grew away at an awkward angle and was sawn off, in punishment.

The third element is a new branch from that second element, and it is clearly heading joyously for the sky: it's about the same size as the second one, so I am guessing that it continued to head upwards until someone realised that it was not going to "weep", and chopped it off.

Both elements two and three are bravely sending out new growth, on the basis that "you can't stamp the life out of a willow".

In my opinion - bearing in mind that all I have are these few photos - I would say that these two thick branches, and the new growth coming from them, are not weeping material at all, but are just ordinary willow, generated from the rootstock. In addition, the extensive damage to the bark of the first (lowest) element suggests that the whole tree is not going to live much longer anyway.

But if Paul wants to give it one more chance, my advice was to start at the very top of the current tree, and work out which are the six or so top-most shoots.

Remove - gently - every shoot below that. Remove by pulling them gently in a downwards direction, the aim is to "rip" off the shoot, but not so hard that you pull off a great streamer of bark as well. If you are not sure about doing this, or if the shoots bend but won't rip, then get sharp secateurs and cut them off as close as you can to the trunk, and every couple of weeks, go back and check each cut for regrowth: rip off any tiny new shoots.

This will leave you with a clear stem, with just a bundle of sprouts at the top. Let those sprouts grow all summer, and see what happens.

If they all shoot straight for the sky, then there is no "weeping" growth left, and all you have is the original rootstock which is probably common Grey Willow, and it will have to be removed - unless you want a plain old willow tree taking over your garden. If they bend over, then hooray! You have a weeping tree again.

And no, you can't "force" them to weep by tying them down. Or, properly speaking, you "can", but it would be a tremendous amount of work, and you would need to constantly prune the branches, as they would all put out vigorous, upward-shooting growth. Honestly, not worth the effort.

So there you have it - in my opinion, once a tree reaches this state, and has bark so badly split, it is better to dig it up and buy a new one, no matter how attached you were to the original. It is perfectly ok to replace it with another willow - there is no problem with any sort of replant disease, as the "failed" tree is perfectly healthy: apart, in this case, from the horrendously split bark. Rather like that horrendously split infinitive, but there you go - you wouldn't believe I have A levels in both English Lit and Lang, would you?

With any tree growing in a lawn like this, it is always a kindness to clear a small area, like a "bed", at the base of the tree, this makes it easier to cut the grass and easier to avoid damaging the trunk while mowing, not to mention making it look better.

So if your weeping tree looks a bit like this one, put aside some time next weekend to dig it out: clear an area of turf at least a foot away from the trunk in all directions, then dig vertically down at the edges of that circle in order to cut off all roots: once the roots are cut, wiggle the stump to and fro like a ten-year-old with a loose tooth until you can get it out: sometimes you might have to cut through a main central root, sometimes they only have a collection of more minor ones.

Having removed the stump, fill in the hole with soil from elsewhere in the garden, or with home-made compost, firm it down well and leave it to settle for a week or two. This gives you time to go and choose a new tree, which can be planted in the nice soft soil, watered in well, and allowed to flourish.

And this time, check it a couple of time every year for branches springing up from below the graft level - from the first element - and ruthlessly remove any such by gently pulling them away from the trunk. If you do this while they are tiny and tender, it is very easy and does not damage the tree.In fact, you can spot them while they are still just a couple of leaves, you can just rub them off, which is even easier!Did you enjoy this article?

Did you find it useful? Would you like me to answer your own, personal, gardening question? Become a Patron - just click here - and support me! Or use the Donate button for a one-off donation. If just 10% of my visitors gave me a pound a month, I'd be able to spend a lot more time answering all the questions!!

Posted by Rachel the Gardener at 06:58