How to remove an overgrown Rosemary bush

I know, I know: we all love Rosemary, it's pretty and it smells nice, but come on, how much of it does anyone actually use as a herb? Just how much lamb can one family eat?

These days, I rarely find Rosemary being used as a herb:  it is usually allowed to grow into a fine bush, usually it is allowed to flower, and it only becomes a problem when it is taking up too much room in a herb bed. 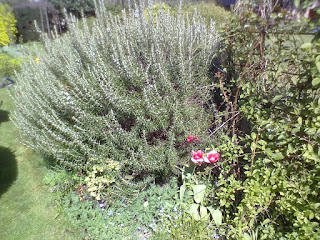 Rather like lavender, there comes a point where it gets too big and leggy - left - and by the time it has reached this size, it usually can't be cut back to size anymore, in which case it is time to heave it out and start again.

This one has been lovely for many years, but now is is spreading right out across the grassy path, ruining the grass and making it hard for the owner to walk past it on wet days, without ending up bedraggled and cross.

So it is time for action. 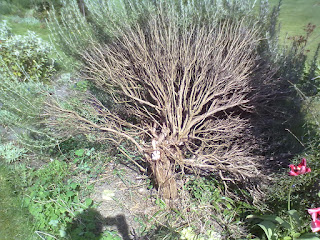 Step one: get your loppers, get down on hands and knees, reach as far underneath it as you can and cut off the branches, as close to the main trunk as you can reach.

Here we are - right - half way through the job.

You can really see the extent of the dead brown wood in this photo, which is - in effect - a cross section of the bush. In fact, to be honest with you, I've been treating this shrub (and it's matching sister at the other end of the bed) as topiary, clipping them to neat round shapes every year, in an attempt to keep them down to a reasonable size. 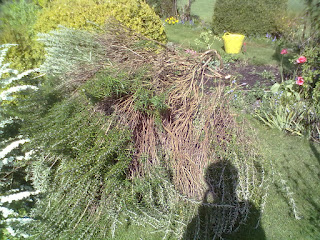 Here's a quick snap of the immense pile of debris created!

It always amazes and amuses me, to see how what looked like a large but reasonable shrub can turn into a massive pile once you start to chop it.

I suppose this is a tribute to the "leaf mosaic" which plants and trees create: they hold their leaves in such a way that every leaf gets as much sunlight as possible, which means they arrange themselves very efficiently, spatially speaking.

When we cut them down, we ruin all this careful arrangement, so this must be why the offcuts seem to be twice as bulky as the actual shrub was. 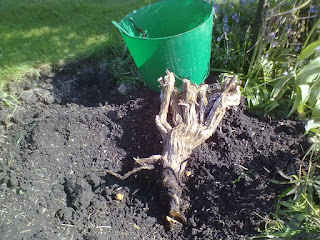 With all the stems removed, the central trunk is revealed, and now I can get close enough to it to start digging out the root.

With a sudden sense of deja vu - remember Digging Out A Buddleia? - I excavate all around the roots, loosening it to the point where I can wiggle the stump too and fro, which then gives me the leverage to loosen it even more, until eventually it gives up, breaks off, and comes out.

Rosemary, like many shrubs, won't grow back from portions of underground roots, so I don't need to dig a massive hole.

Once the stump was out, all that remained was to fork over the edges of the hole, add a bucketful or two of our home-made compost to replenish the soil, and lo! and behold, ready for replanting. But not with another rosemary!
Posted by Rachel the Gardener at 10:01