There are many products out there which you can buy to get rid of snails, but many of us have concerns about polluting our gardens with nasty chemicals, plus the knock-on effect of other creatures eating the poisoned slugs before they finally shrivel up and die ("Mwaaaah haaah haaa!") (sorry).

There are just as many tall stories on the internet, of what will absolutely, definitely, with no exception, get rid of the darned things.

However, most of them are old wives' tales, and simply don't work.

Of the products, slug pellets work, perfectly, easily, every time, no mistake. But they are nasty chemicals. Then there are nematodes: tiny parasitic organisms that kill slugs and snails from within, as it were. You can buy them from the internet, but there is no real way to tell if they are actually working or not - the supplier can (and does) say that their action is affected by temperature, soil conditions, amount of water in the soil, can takes weeks to work, must ensure they don't die before you spread them about, blah blah, woof woof, until sometimes you wonder how they manage to sell any of the little beasties at all.

As an aside, one of my Clients once bought some expensive nematodes designed to kill Vine Weevils, and they totally, completely, 100% failed to work. Well, I suppose they might have killed off a few of them, but the plants in question - a dense bed of Bergenia (Elephant's Ears) in the shade of a vast Yew hedge - were just as raddled with foliage holes as they were before we applied it. In the end we gave up, and created an exclusion zone around them to keep them in that, rather unloved, corner of the garden.

Anyway, back to the slugs and snails: Old Wives Tales.

1) Crushed eggshells around a favoured plant will keep them at bay. 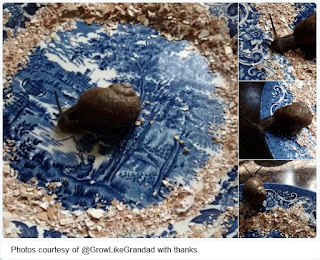 Reproduced with kind permission of a chap on Twitter, his handle is @GrowLikeGrandad.

As you can see, he put a snail on a plate, surrounded by a ring of crushed eggshells.

The experiment was repeated with much larger pieces of eggshell, to exactly the same result.

So no, crushed eggshells won't do any good at all. Nor will putting them on your compost, while we're on the subject of eggshells - honestly, they don't rot, and there is no scientific proof WHATSOEVER that the "goodness" in the egg shells can leach out into the soil. For that matter, there is likewise NO PROOF that using the water in which you boiled eggs will be of any benefit to your plants, over and above that of the water itself.

2) "Lay down a bramble stem."  Seriously, someone somewhere made this statement. Exhibit B: 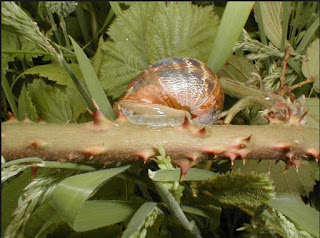 Well, there you go. Snail gliding in unconcerned manner across a bramble stalk.

You can try this with fresh bramble, with dessicated rock-hard old brown ones: the result will be the same, the snails (and slugs) are not the least bit fazed by something a bit prickly.

In fact, open  up another tab right now, and type in "snail on razor blade". Go on, I dare you. See? The expression "sharp as a razor" means nothing to slugs and snails.

*sigh* Another urban myth, with a tiny grain of truth behind it. Coffee grounds contain caffeine, and caffeine is pretty toxic stuff - too much of it is "bad" for us, and likewise for slugs and snails, but you need a much higher concentration of caffeine than you will find in coffee grounds. Think about it - we drink coffee for the caffeine, so would all those expensive coffee shops throw out something with any use left in it? Coffee is carefully processed to extract as much of the caffeine as possible before it is discarded.  (Obviously decaffeinated coffee grounds are a complete waste of time!

Furthermore, if you pile coffee grounds thickly on the garden, they will go mouldy which invites fungal diseases - oh dear, not so good for the plants. Or the beetles, frogs, toads, birds etc.  Certainly the texture of the coffee grounds won't have any effect - see 2) above.

Spraying a caffeine solution on the leaves of vulnerable plants would do it - but the slugs would have to eat the plant in order to ingest the toxin, so that's not exactly viable, is it?

No it doesn't. All that business about the moist body of the slug/snail conducting a weak but repellent electric charge is just rubbish.

I tested this one day, using the lid of an ice-cream tub, with a full edging of copper tape around the perimeter - rather like @GrowLikeGrandad's plate, above.  It was a simple test, scientific in the sense that it is repeatable by anyone. Take a rigid sheet of plastic, stick down a border of copper tape, grab a couple of slugs and snails, and drop them down in the middle. Do they escape, or are they trapped forever?

Well, of course they escape.

I did some more research at that time, and discovered that the theory was to do with the moist body of the mollusc creating a circuit. Consultation with an Electronic Engineer that I happen to be on very good terms with *big grin* suggested that the only way it could possibly work would be if the moist body "completed a circuit", so we made two parallel circles of copper tape, one inside the other, and waited for the slugs to bridge the two.

Did it make the slightest difference? No it did not.

However, when we wired up a cheap solar garden light to the two circles - whooo hooo! They recoiled as though it really, really hurt them. ("Mwaaah haaa haaaa!")  After an hour or more in the baking hot sun, it became apparent that they would rather die than cross an electrified copper tape, even one only powered by a tiny solar panel.

Before you ask, we did briefly consider marketing it, but we could not find a reliable way to connect the solar panel to the copper tape other than soldering - so the only way we could do it (bearing in mind that most people can't solder) would be to instruct the customer to lay down an  unbroken hoop of copper tape, then we would come along and solder the connections. Simply not feasible, plus it would only really be worth it for large raised beds.

But!!  before you go home crying in disappointment, I have found one cheap, relatively simple way to make a pot or trough 100% immune to slugs, snails and - incidentally - vine weevils.

Step one: buy or construct your chosen pot or trough. I made a simple box out of old planking and planted it up with strawberries, mulched with gravel for a decorative effect, and to keep the fruits dry.

Step two: using recycled wooden planks *laughs* (ok, you can use brand new wood if you want to!) construct a wooden frame, big enough to go right around your pot or trough, and at least an inch bigger in each direction.

Step three: find an old compost or bark chip bag with no holes in it (apart from the one at the top, obviously) and use it to line the frame: I cut my bag very roughly to size and used a staple gun to hold the sides in place. I arranged it so that the printed side would not show.

Step four: position the frame where you want it. You won't be able to move it later, so apply some thought before you do it.

Step five: place two bricks inside the frame, on top of the plastic. Fill the frame with water. If if all leaks out, get a better bag (or a piece of pond liner) and try again. 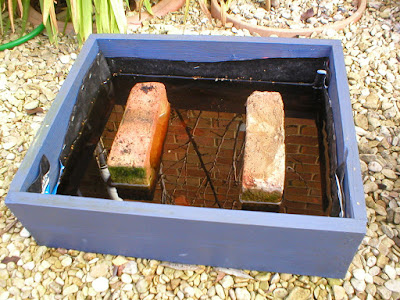 Here we are at step five: you can see how unevenly I have trimmed the black plastic, but it really doesn't matter as it's not visible once the planted box is in place.

(This was only supposed to be a trial, I was intending to make a "proper" one once I'd established it would work, but I've been using it for the last seven years and it's still going strong!) 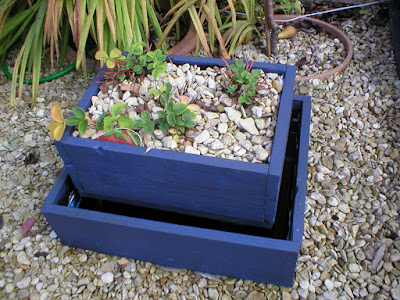 Final step: carefully lower the planter down onto the bricks.

The bricks keep the bottom of the planter out of the water, so it won't rot, and the water keeps the slugs and snails out, as they can't swim.

All I do is keep the water topped up, and no slug or snail has ever made it onto the plants.

A) Essential to keep the water topped up, otherwise.. well, you can imagine the disaster if you let it dry out, some snails move in, you refill it (not realising that you have political prisoners trapped on your island) and they scoff everything that grows there.

B) Essential to ensure that nearby greenery does not flop across to make a short cut - see A.

C) As with any pot, you have to water it in hot weather. I tend to top up the moat whenever I water  - and of course any excess water drains through the trough and into the moat. Overfilling the moat isn't an issue, as it just leaks away once above the level of the plastic.

So there you have it: forget coffee grounds and copper tape, just make some moated beds!

Posted by Rachel the Gardener at 14:19