Why put broken crocks in pots?

"...for drainage" comes the instant reply.

Every gardener I have ever known; professional or amateur, beginner or experienced, useless or green fingered, has put broken crocks into plant pots, especially into large, decorative, "permanent" ones.

In recent years, it keeps being suggested that you can reduce the weight of your pots by using a thick layer of polystyrene instead of crocks, before adding the soil - either broken-up bedding plant trays, or those packing peanuts.

This material is a curse to the environment, to gardeners, to wildlife, and to everyone who has to watch it blowing around and refusing to rot, ever. Putting it in pots may well reduce the weight in the pot, but by doing so it makes the pot top-heavy, so it may be more inclined to tip over in high winds or if knocked.

Furthermore, the roots of the plant will inevitably work their way into and around the polystyrene, no matter what type you use: so when you empty out the pot, pulling out the plant involves breaking up the polystyrene,  leaving little bits of it flying around all over the garden. You can rarely, I find, re-use the same polystyrene blocks more than once or twice, because of this.

They also form a matrix of empty spaces inside the pot, which is a perfect breeding and growing ground for all sorts of nasties which can creep up the drainage holes, not least of which are SLUGS which I have found in disgusting handfuls, when emptying out big pots.

The idea, as with the polystyrene, is to keep the drainage holes clear, to prevent waterlogging of the pot.

But this clearly doesn't work, as anyone who has ever grown plants in pots will know: no matter how carefully you build a teepee of crocks over the drainage hole, when you tip the pot out, you will find a solid mass of earth right down to the bottom, with the crocks embedded in  "jelly mould" fashion, such that every time I am emptying pots for my various Clients, I have to turn the pot-shaped emptied soil ball upside down and dig into it, in order to extract the crocks. 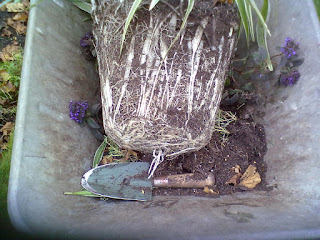 Here's a perfect example - can you even see the crocks at the bottom?

No - they are completely filled in, smothered, grown around and over by the roots of the plant.

So no, putting in a couple of bits of broken pots does not keep the drainage holes clear.

The other half of the problem is that if you do it properly, by putting in a large double handful of crocks (most people just use three, artistically leaning against each other) and packing it down well, or by putting in a thick layer of sand/gravel, (and this applies to the horrible polystyrene as well) then you are - apparently - creating a discontinuity between the top layer of compost-and-roots, and the bottom layer of crocks-and-air, or sand/gravel. This can sometimes mean the creation of a false, or "perched" water table, which means that the water is held at the junction of the two layers, instead of draining right through.

And this, of course, is exactly NOT what you want!

In this article, the BBC, no less, debunk the myth of using broken crocks for drainage.  They say:

"But a study by consumer magazine Which? suggests it's a myth. Researchers planted 40 pots each with five "Million bells trailing yellow" - a flowering plant prone to root rot in saturated soils. Permutations involved plastic pot, and terracotta pot, and with either saucers or no saucers. Half got crocks, half did not. The plants were recorded for "vigour and flowering impact". The magazine found that the crocks "made no difference to how well our plants did"."

On the same day, Val Bourne (who I've met at a PGG meeting, very nice lady!) writes in the Telegraph:

" Until this week, for instance, we’ve all been faithfully keeping our old pots and breaking them up before placing them in the bottom of our containers. Now, scientists have proved that's completely wrongheaded. Excess water moves into the coarser material (such as crocks and gravel) once the soil is saturated, thereby creating a watery sump that freezes in the bottom of your pot - killing off your plant’s roots."

A month earlier, the Telegraph published an article by Ken Thompson, a fellow PGG Guild Member, botanist and all-round jolly good chap, in which he explains the science behind the change in texture of the materials, ie the compost layer on top of the crocks layer: he then summarises thus:

"Exactly the same happens in your plant pot. When you pour enough water in the top of the pot to saturate the compost, gravity overcomes the capillary barrier at the compost/crocks boundary and it drains away through the crocks and out of the drainage hole. But it would do exactly the same if the crocks weren’t there, and when you stop watering, you’re left with a perched water table in either case, crocks or no crocks. The only difference is that if there’s a layer of crocks, the water table is perched at the compost/crocks boundary, and if there isn’t, it’s at the bottom of the pot. So there’s no harm in continuing to bung crocks in the bottom of containers if you feel you ought to, or because your mother did, but be aware that their only practical effect is to reduce the volume of compost available for plant roots."

So there you have it: there is no real point in putting a layer of crocks into pots.

Now, back to the real world: what do I do, personally? *laughs*

I lay a small piece of horticultural fleece down in the base of the pot, then tip in the compost. This keeps ants and earwigs from crawling up into the base of the rootball, and does not interfere with the perfectly normal and natural drainage of the pot. When potting on, it's easy to pull it away from the root ball: and in some cases, it helps to stop the plants pushing tap roots out through the drainage hole and rooting themselves in the shingle!

In addition, at my various Clients' gardens, I usually encourage them to stand their large pots in saucers during the summer, to prevent them drying out too rapidly, but in autumn I go round and turn the saucers upside down, so each pot is standing on a low plinth, to allow extra drainage - and to avoid them sitting with their roots in water - through the winter.

That's all. I have better uses for broken terracotta pots - but more of that later!