Ivy: love it or hate it, gardens are full of the stuff, and if ignored, it tends to get a bit carried away.

There are two sides to the argument about ivy on trees: some say that the ivy does not harm the tree, as it only clings for support, it's not a parasite, and does not take any nutrition direct from the tree.  These people will also point out the beneficial effects to bees of having pollen available in the autumn, and to birds of having berries available in the spring, not to mention the vast amount of wildlife living in amongst the shelter of leaves and stems.

Others will point out that a cloak of ivy can ruin a tree by making it top-heavy in winter, when leaves are normally shed to prevent wind damage: it masks the shape of the tree, ruining it ornamentally, while also making it impossible to assess the condition of the tree.

Anyone that has ever pulled away a shield of ivy will know that it is full of woodlice, beetles etc, all of which infest the bark of the host tree: the ivy's aerial roots might not in themselves damage the bark (although I would dispute this, having seen ivy removal taking the bark off with it) but they keep it soft and moist, allowing burrowing insects to get well inside it. This cannot be good for the tree!

There is also the point that although the ivy might not be directly parasitic, it will have its roots in the ground immediately adjacent to the host tree, and will therefore be competing strongly for the same nutrients and water.

And as for the wildlife... I would urge anyone who thinks we should incorporate a wild patch of nettles and ivy in our gardens "for the wildlife" to look over their fences, to go for a walk around the back alleyways and footpaths of their town, to check out the canals, used and disused, to look in hedgerows - you will find masses of nettles, ivy, and other weeds, all flourishing beautifully. There really is no need to sacrifice an isolated patch of our precious garden, when there are acres of wild land all around.

So, you might possibly gather that I'm not a big fan of ivy in gardens.

And never more so that when I found this poor little thing: 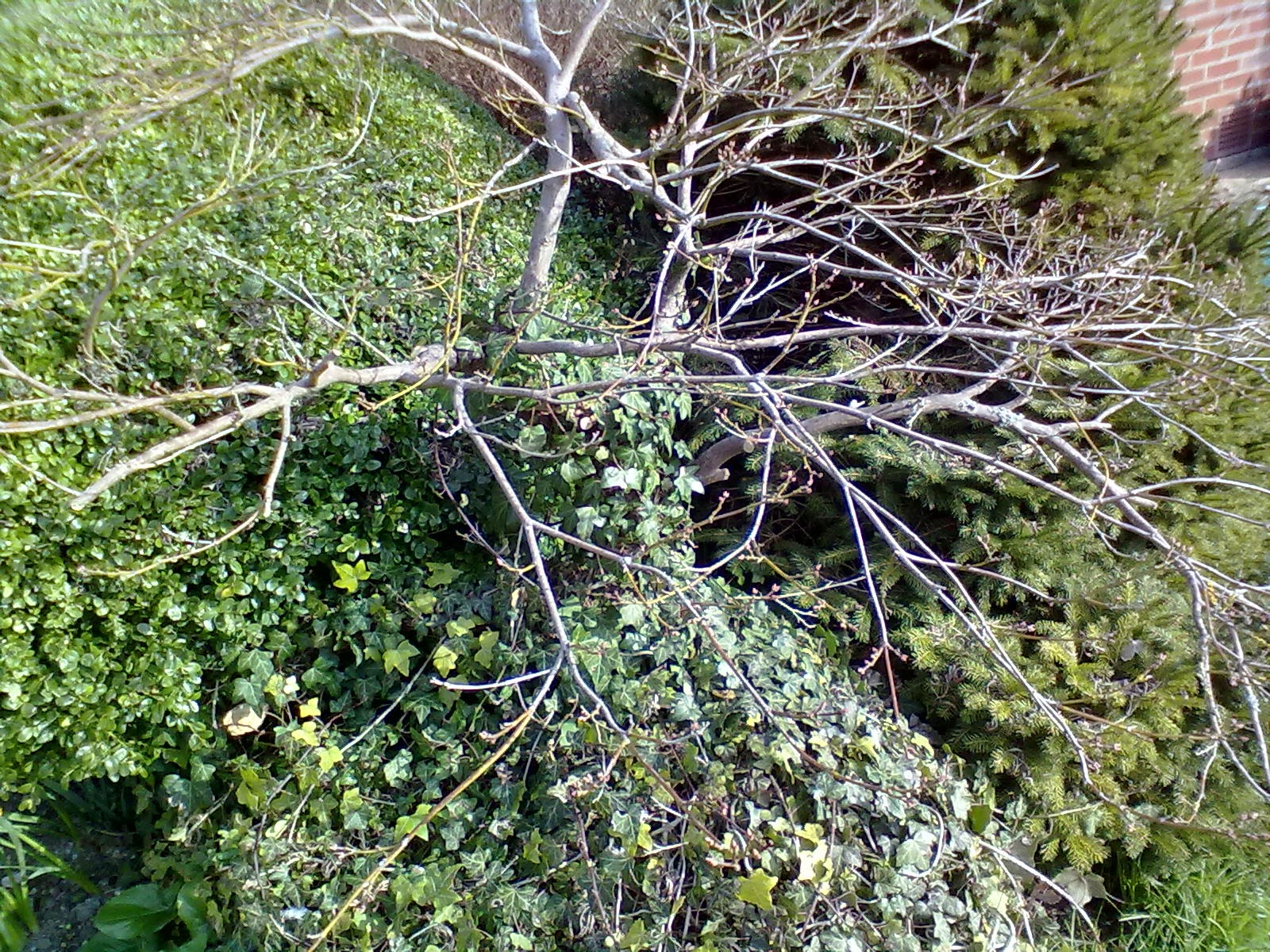 Well, I can tell you that the upper branches are some kind of Japanese Acer, there is a massive, badly-shaped box "lump" to the left, and a dwarf conifer behind it.

But as for the ivy-covered area - it was impossible to tell.

So I set to work, carefully untangling the ivy from the upper part of the tree, following it down to the ground, and cutting it away in sections to avoid damage.

After a while, I hit rock! Bizarre, I thought, Japanese Acers don't usually grow out of rocks?

Gradually, the stem of the tree appeared from the dense cover of ivy - it was growing at an extraordinary angle, over the rock, apparently in a desperate bid to avoid being smothered by the encroaching Box to the left.

Here is the result: 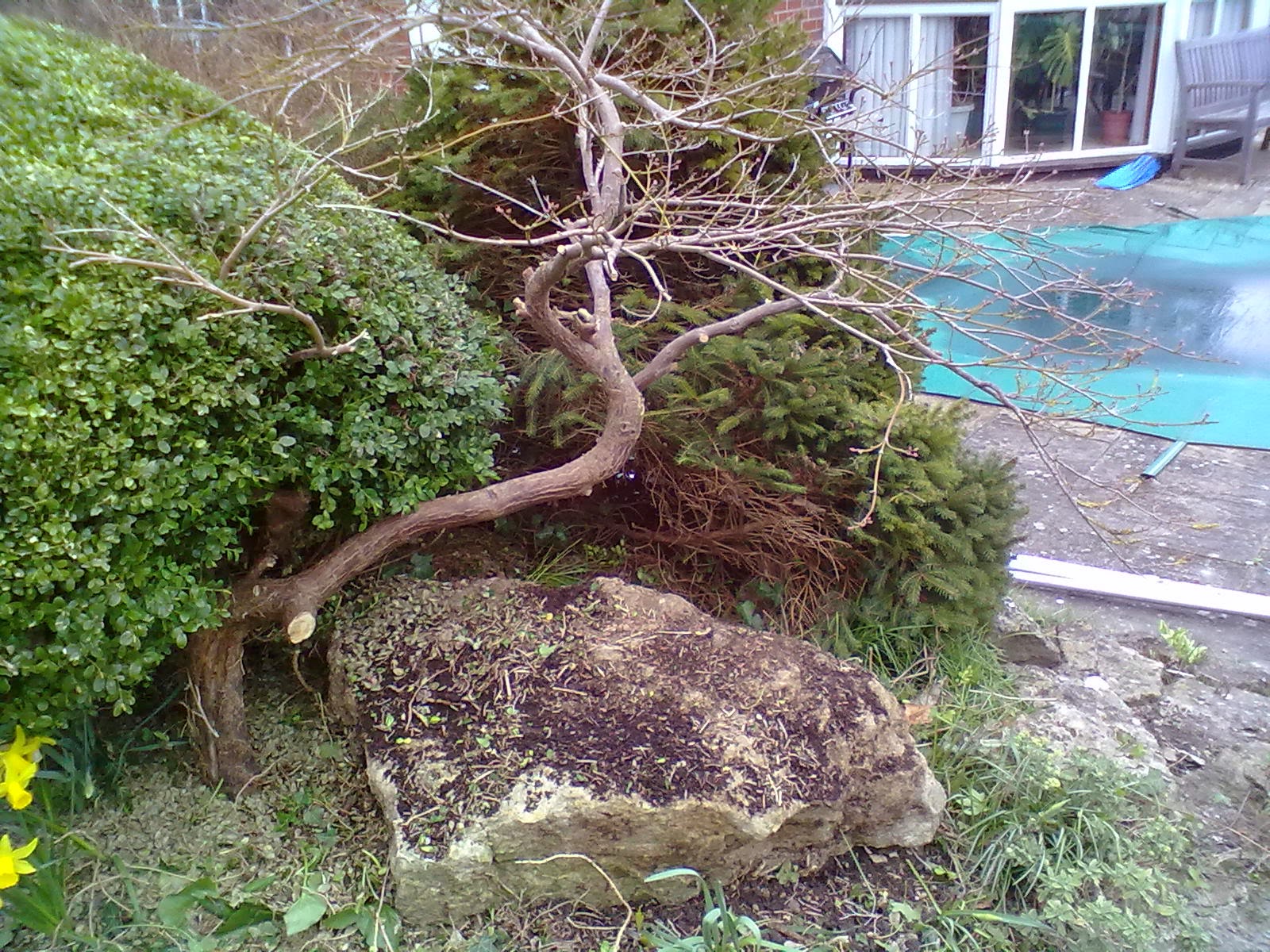 Once I could see what I was dealing with, I carefully cut back the Box "lump" to get it clear of the Acer's stem, and I removed much of the conifer's dead brown undergrowth.

Over the next couple of weeks, I will be reshaping the Box completely - past gardeners had hacked into it to allow room to walk past it, with no thought for the overall shape. I intend to make it back into a round ball, as that was presumably the original intention.

Can you imagine what the Japanese Acer is thinking?

It's either taking a deep breath, for the first time in years, and saying "Ahhhhh! Lovely!" or it's screaming "Don't look! I'm naked!" in panic!

UPDATE: if you want to see what happened, here is an article from later in the year....

Posted by Rachel the Gardener at 08:03