The Tale of the Smothered Acer or: How To Remove Ivy From A Small Tree: Part II!

I started work in a new garden last year, and I was intrigued as to what this was: 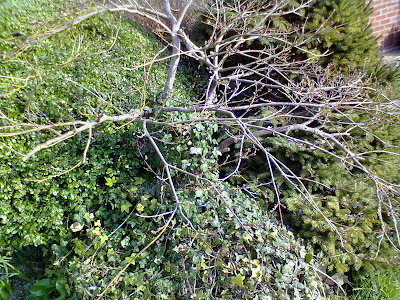 However, it was mostly covered with ivy, and was pretty well swamped by a massive, encroaching, ball of Box.

The first job was obviously to get rid of the ivy - always an unpleasant task, but on the other hand, I quite cheerfully detest ivy for many reasons, so there is always a certain amount of pleasure to be derived from getting rid of the stuff.

I started at the top, carefully unwinding the strands of ivy from what did indeed prove to be a small tree. When doing this, it's important not to just impatiently rip the stuff off, as by doing so, you might well damage the plant underneath. Even though it's a tree, it is still quite easy to inadvertently snap smaller branches.

So, gently does it, unwinding the stems, and as they come free, snipping them off into short lengths, taking care not to cut any part of the tree beneath.

After a short time, this appeared: 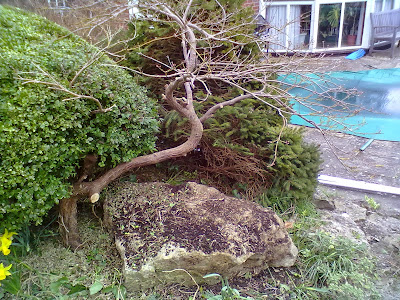 Yes, it's a Japanese Maple, and look - it's a rock! I had no idea that underneath all that ivy was a lovely old rock!

And  what a lovely windblown curve the stem has formed!

The tree, who was probably now screaming "Don't look! I'm naked!" seemed to be mostly undamaged by the experience, despite being pushed right over.

Annoyingly - well, to me, at any rate - previous gardeners hadn't taken the time to clip the monstrous Box ball, but had allowed it to smother this dear little tree.

I can't imagine why anyone would do this.

So that would be the next job - radical chop for the Box, but not just yet - I would rather wait and see if the Acer survives before I start altering the other plants. It would be very annoying to slaughter the box, only to discover that the tree is actually a dead one, particularly as the trunk of the little tree was revealed as being quite damaged. Also, this initial work took place in March, and I would rather not cut Box quite that early in the year, in case a frost comes along and ruins all the new growth.

By May the little tree was leafing up beautifully, so I went ahead with modifying the Box.

What you can't see from this angle is that the Box ball also encroached on the path to the left of the photo, to the point where people had chopped out a section of it in order to get past.  This makes a mockery of clipping it into a ball shape, with a great big lump missing out of the side of it... so I had no compunction about removing well over 2' in all directions, in order to reduce it to a size that would not encroach on the path, and would not interfere with the newly-revived Acer.

This does leave a lot of very bare stems, but they are one of those trees - like Yew - that will "break" from old wood, which means that when the bare inner stems are exposed to the light, they will produce new growth. Most conifers, famously, don't do this: once you cut back into old wood, they remain stubbornly brown and ugly for evermore, until the owner can't stand them and has them removed completely.

And no, I  don't know why the expression is to "break",  other than the way we say that a plant has "broken into bud". 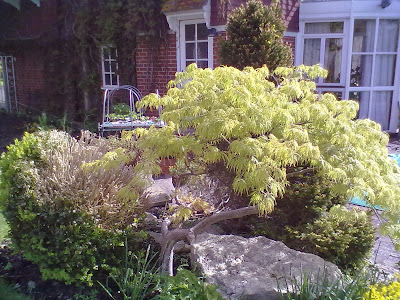 Here we are in May:  lots of leaves on the tree, and a newly-chopped Box, much reduced in height, width and depth.

Two months after this photo, the Box had greened up quite nicely, in case you are worried!


So now I am a happy gardener again: the dear little Japanese Maple survived the experience, and we are now able to see it, in its full glory.

And it is quite glorious!

Posted by Rachel the Gardener at 11:15