How to: coppice Catalpa

Actually this goes for Paulownia (Foxglove Tree), Eucalyptus, Liriodendron (Tulip Tree), Aesculus (Horse Chestnut) and anything else that you need to keep small for convenience, or in order to get the largest or prettiest foliage.

All you have to do is take a deep, deep breath, and chop the top off.

It's best done in late winter or early spring, just as they start to bud, for several reasons: firstly, by pruning just as the sap is rising, all the energy of the plant will go into making new growth straight away, so that your fresh cuts don't have time to rot, or to allow infection in. Secondly, if you allowed the tree to grow for several weeks before pruning, you will have "wasted" all the energy that was pushed into the new leaves, thus draining the tree unnecessarily. Thirdly, you can see within a week or two whether your pruning has been successful - or not.... Fourthly, doing it without it being covered in leaves means you can see what you are doing more easily. Lastly, without leaves, there is less of it to dispose of!

I have some Indian Bean Tree (Catalpa) saplings which I have grown from seed, intending to plant them out when I get a bigger garden. There is no sign of me moving, but my seedlings are growing and growing, and are now nearly as tall as I am.

So last year I decided to coppice them, they grew on beautifully, and now it is time to coppice them again - once you start, you have to keep on doing it, as you have, in effect,  "ruined" their natural form, and to get them back into a natural shape would require some intensive training. 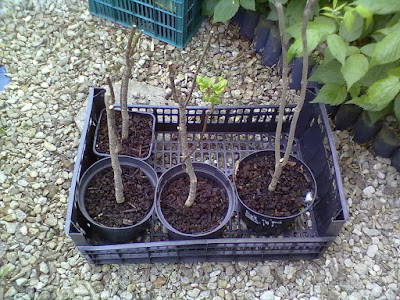 Here they are back in May: Catalpa are very late starters.

Four saplings, each has already been cut before, at about a foot above the ground.

Pruning usually produces multiple branches, and you can see on the far right-hand one that the cut from last year is only a couple of inches above the ground, whereas the others are all much higher up the trunk.

Regardless of how low or high you start,  each year I prune each of the new-growth stems back to about an inch or so above the growing point.

The idea is that each cut will then make two (or more) new branches, so gradually they will build up a bushy head of foliage, without being forty feet tall. 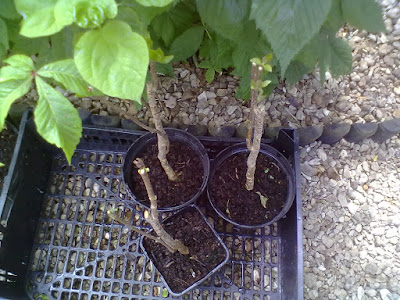 Here we are on June the 17th - you can see that the left-hand one - which was the middle one in the photo above, sorry, I have turned the tray round and sold off one of them since May - is putting out good leaves, while the other two, which were cut much harder, are just making small leaves. 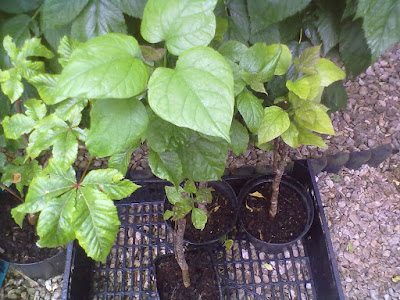 By June 28th, we have good growth on all of them, although the one at the front  is lagging behind a bit, probably because it is overshadowed by the larger one. 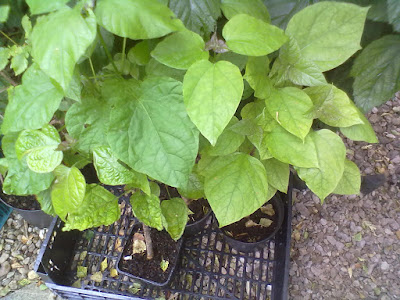 And here they are in the first week of July, sprouting very nicely.

So there you are, proof that drastic pruning does not necessarily kill things, and a nice illustration of the strange fact that coppicing a plant often induces it to produce leaves that are much larger than you would expect, for the given height at which they appear.

This can be particularly dramatic with ornamental trees such as the Foxglove Tree (Paulownia) whose heart-shaped leaves can be almost a yard across, if you coppice it to waist or head height.

So there you are, that's how it's done: deep breath, be brave, and chop!
Posted by Rachel the Gardener at 12:35