It's time for another biting product review!

Recently, I asked one of my Clients if they had an old outdoor broom that I could leave by the compost bins: the path leading to the area is lower than the soil level (I'm working on changing it!), and the loose soil falling across it is unsightly, as well as making my boots muddy every time I walk over it - which means I then track the mud across the lawn on my way back.

Last week, a new broom appeared. A brand new broom.  Oh dear, I was hoping for an ancient one, as it is going to be left outside.... well, never mind, I will tuck it under the hedge and hope that it survives.

The label says Kleensweep, a tacky americanism that sets my teeth on edge every time I see it, but luckily the label is already starting to peel off. 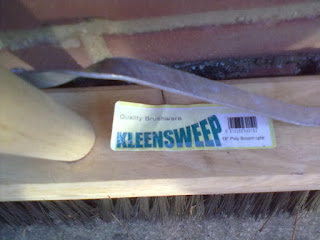 It has a pair of rather strange twisted metal struts to hold the head on, never seen anything like that before: but it should make it sturdy.

The bristles are rather weird as well - normally a broom has the bristles pointing slightly backward, so that when you sweep away from your self (the normal thing to do) they are already oriented correctly.

On this broom, however, the bristles seems to be pointing directly downwards, which means that every time I apply the broom to the path, it "bobbles" around for a second, until the bristles lean into the sweeping action. This is very strange, rather uncomfortable, and I sincerely hope that with time and use, they will "settle" into pointing one way or the other.

That, however, is not the worst thing about this broom. 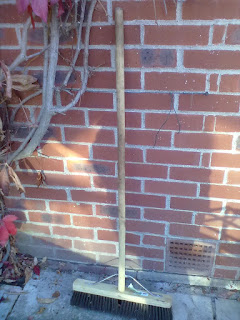 Here's a picture of the broom - right.

Ah, but looks can be deceptive... 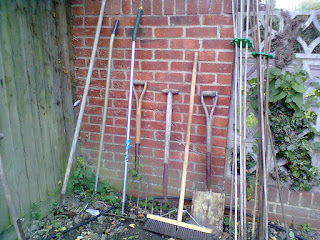 Here it is again, leaning up against the wall with several other tools.

It's barely a foot longer than the forks and spade!

This makes it almost-but-not-quite-entirely useless as a broom: you can't sweep more than a foot or two away from yourself, or you lose hold of the handle! I nearly fell over the first time I used it - I started to sweep some leaves away from myself and there it was, out of reach!

What sort of idiot makes tools with teeny tiny short handles like this? It's not aimed at children, or very short people, it was sold - apparently - in a perfectly normal garden centre.

Worst of all, because of the metal bracing, you can't easily just put a longer handle on it. And why should you have to, anyway? *annoyed huffing*.

So, boo to "Kleensweep" and their Epic Fail Broom, and I shall be sweeping the path in tiny little arcs, for the rest of my time in this garden...
Posted by Rachel the Gardener at 09:34