Potbound plants: how to deal with them

What exactly is a pot-bound plant?

Ans, one which has been in the pot for too long. This frequently happens at nurseries: if plants don't sell, they are kept for another year, and instead of being potted on, which means being removed from the pot and put into a larger one, they are left.

Why? Well, because potting on involves money - the cost of the new pot, additional compost, and someone's labour to do the work. It will also need relabelling, and if it has a posh printed label stuck to the pot, this could be expensive.

So it's easier for nurseries to leave them where they are.

The problem is that the roots keep on growing, and when they meet the inside of the pot, they start going round and round, forming a tight net of roots. Then when the plant is bought, taken home and planted, it struggles to get any roots out into the soil.

Here's one I was presented with in January: 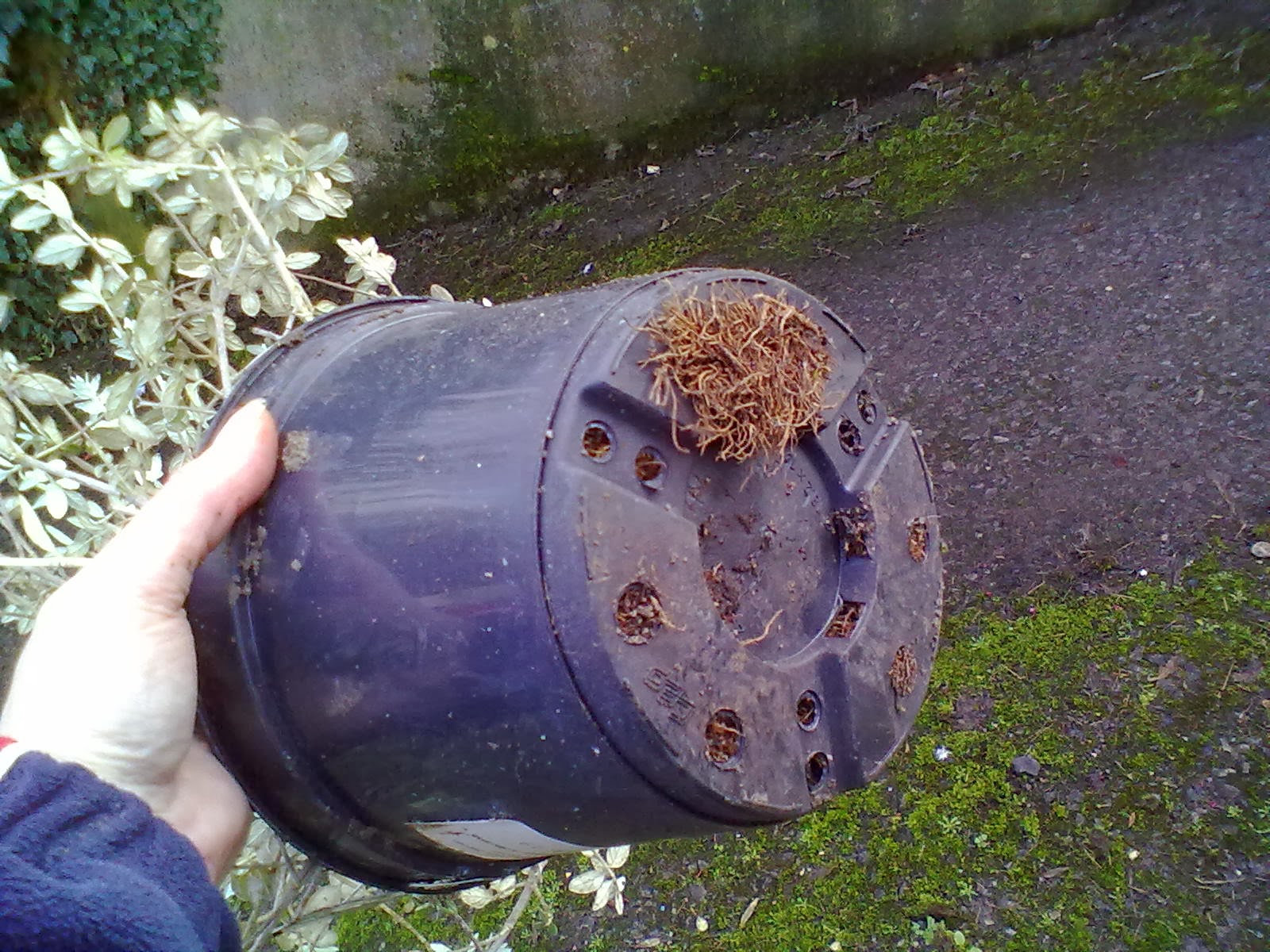 This is the classic warning sign of a pot-bound plant: the thick tuft of roots growing out of the bottom.

If you are lucky, you can tap the pot rim enough to loosen the plant within, then "wiggle" the whole thing out without damaging the bundle of roots.

More often, the only answer is to cut them off in order to get the plant out, which is what I had to do here - when I picked it up, every single hole had a tuft of roots like this one, and I was nearly finished before I thought to take any photos.

Even after cutting off the tufts, sometimes the plant is so securely stuck in the pot, you may have to cut the pot off the plant! 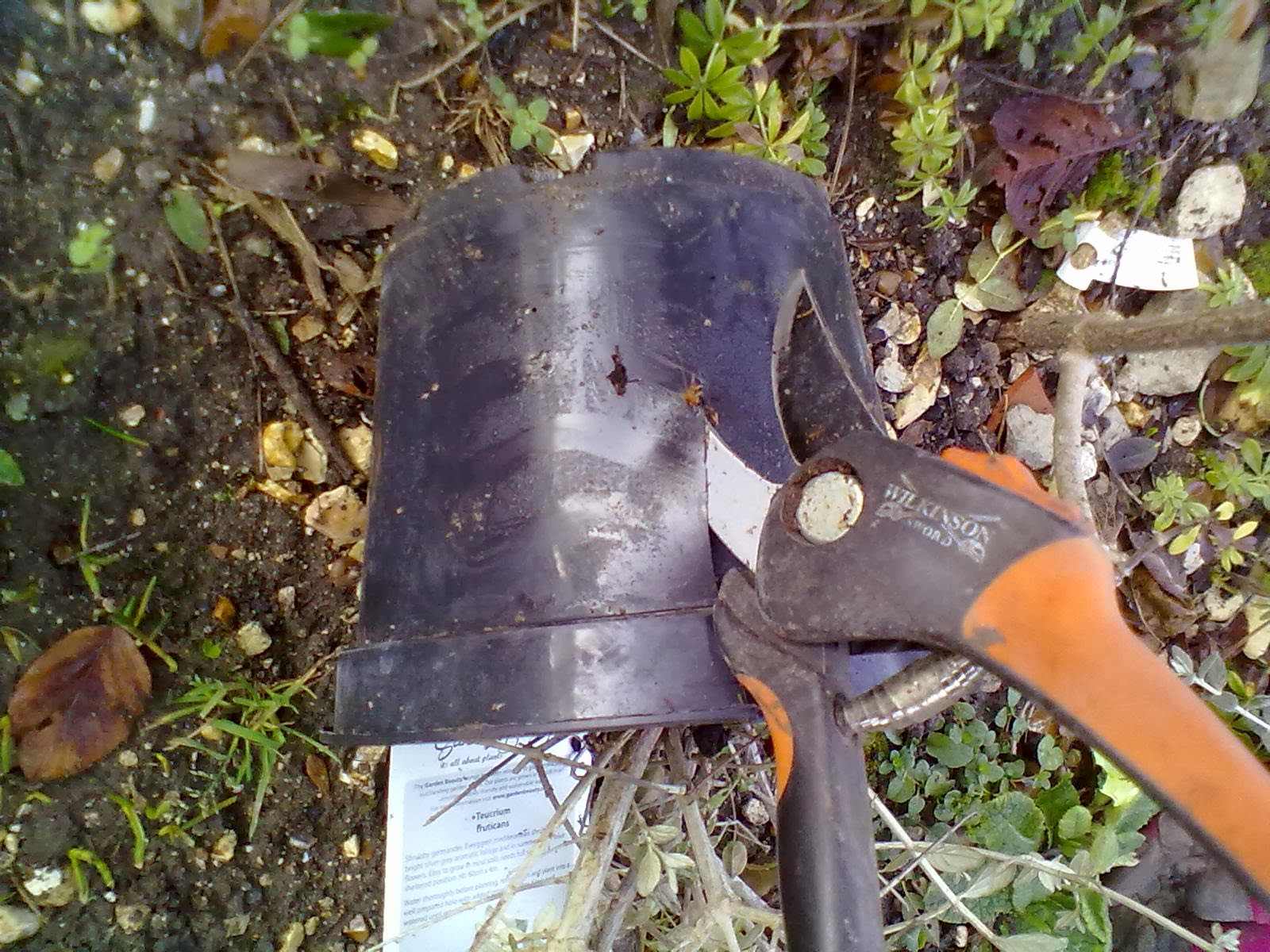 That was the case on this day - the roots were sticking to the inside of the pot, and it just wouldn't budge.

Normally, my first move is to hold the pot upside down in one hand, and bang the rim of the pot on the other hand, which usually dislodges the plant.

Not today, it didn't.

The next move is usually to find something like the edge of a wall or a step, and use that to bang the pot more convincingly.

In this case, it was a small shrub, and it wasn't possible to get the right angle to do so, without risking damage to the plant, so the only option was to remove the pot. Out with the secateurs, slide them carefully down inside, and chop chop chop. 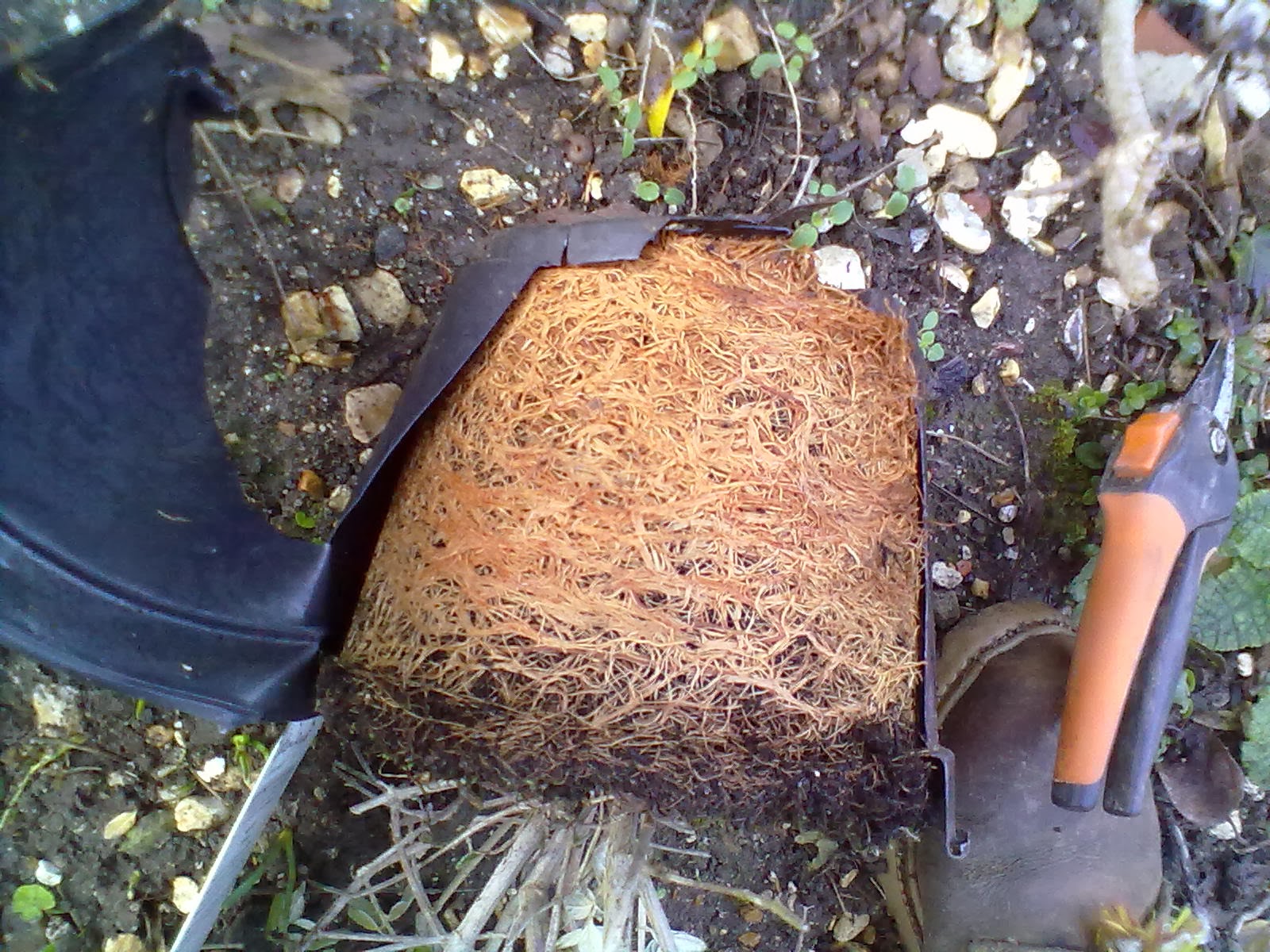 The roots still refused to let go of the pot, so I had to cut it away in sections, as you can see here.

Generally, once you get over half-way round, the rest will peel away in one sullen lump.

In this case, I had to cut right across the bottom as well, before it would come out. 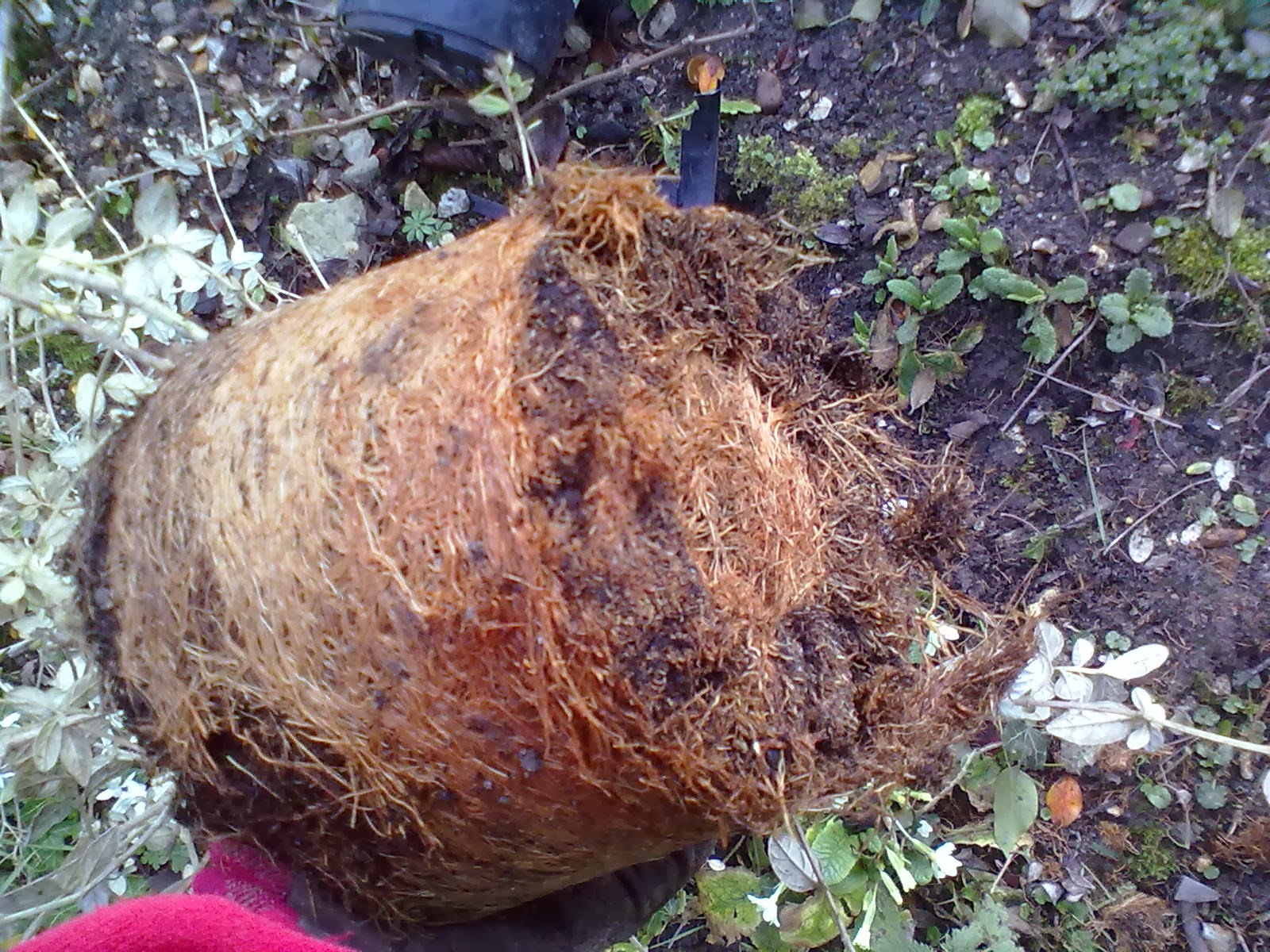 Once the plant was released from the pot, the next job was to get rid of some of that mat of roots.

I know it seems extreme, but those roots which have been circling the edge of the pot are rock hard and bone dry, as they have been "baked" against the inside of the pot for months.

They don't help the plant to take up nutrients any more, and they prevent the smaller roots from working their way out into the soil when you plant it.

So the answer is to gently - or not so gently, in this case - pull them out of the "pot" shape. You can see on the bottom where I have "fluffed  up" the roots,  and I then did the same to the sides. You can use your fingers, or a small hand-fork, and in my experience, you can be quite firm with them.

Sadly, typically, I forgot to take a final "after" picture, as I was rushing to get it safely in the earth, but I hope that at least you can see the principle.
Posted by Rachel the Gardener at 06:47