Apparently snowdrops are becoming big business again: there were reports in the Horticultural press of people paying £360 for one snowdrop bulb. One!! 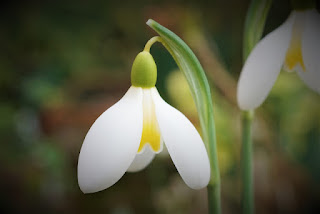 OK, it was a particularly rare one, called "Mother Goose" and as you can see, left, it's mostly yellow, instead of the usual white and green.

Would you pay that for one bulb? What if it died?

Personally, I'm not that fussy about my snowdrops - I love them all, they are so cheerful at this time of year, and if I have a favourite, it would be the common or garden Galanthus nivalis, double flowered version, Flore Pleno.

One of my gardening colleagues is a big Galanthophile (that's the name for snowdrop lovers, apparently) and she got quite excited about these rare ones, although she draws the line at paying £360 for one.

To amuse her, I sent her photos of two "unusual" snowdrops in my garden which I thought might interest her:

The one on the left is Galanthus nivalis "Grumpii" and the other is "Blue Moods".


*snorts through nose, and puts felt pens away*
Posted by Rachel the Gardener at 08:57