Salix Caprea Kilmarnock: How Not To!

Under the general heading of "Crimes against Horticulture", this little tree makes me cringe every time I see it: 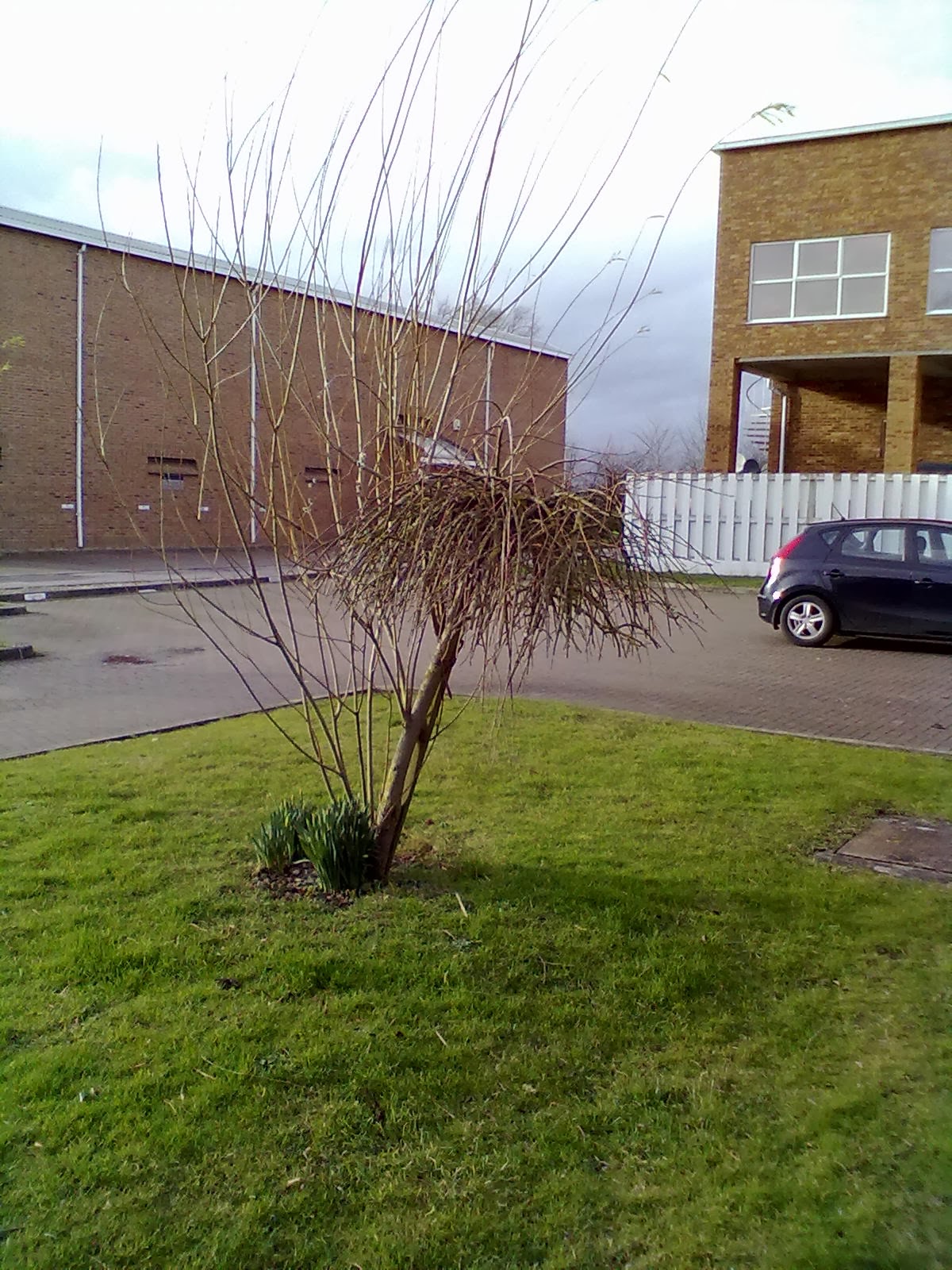 Let me count the ways...

It's worth repeating that these are not "natural" trees, but are two types in one. The top part is a strongly weeping Salix Caprea, (Goat Willow, also known as Pussy Willow) grafted onto a straight upright stem of another willow.

It's a very popular little tree, being in effect a dwarf weeping willow on a short, upright stem.

But they need some very particular maintenance: you have to cut out any growth from below the graft or join, as it will be from the rootstock, ie not weeping at all.

As you can see here, the groundsman has totally failed to nip off new rootstock sprouts as they occurred, and now they are bigger than the original tree.

So that is the first and biggest mistake.

Then there is the terrible "pudding bowl" chop that he's done to the top part. Wrong! Wrong! The effect to aim for is a "light, airy waterfall" of foliage. Chopping off the ends like this ruins the shape of it, it looks ridiculous, and it will take quite some time to get it back in shape, as every cut end will now sprout a handful of new shoots.

I'm not even going to mention the "why bother with it" staking style, nor the tasteful ruff of weeds at the base...

So what should you do?

Firstly, regular vigilance to remove any shoots from low down on the stem. If you see the first sign of a bud, rub it off. If you don't spot it until it's a small shoot, that's ok, just get the secateurs and cut it off, flush with the stem. If they are springing from below the ground, gently scrape away the soil until you see the point where it comes from the stem, and chop it off there. Replace the soil. If you just cut it at above-the-soil level, it will sprout several new stems, hydra-like, and you will have half a dozen instead of one.

Secondly, instead of chopping the top,  thin it out by removing a few selected branches, right back to the centre. This reduces congestion, and retains the shape.

If you have one that is a dense mass, get down on hands and knees and work your way under the umbrella of foliage to the central trunk. Reach upwards, and start by cutting out all the dead stuff you can see - this is a good time to do it, early spring, as the live shoots will be budding, making it easy to spot the dead ones. It's also easy in summer, but with all the leaves on it, it can be a bit harder to see what you are doing. Either way, get out all the dead stuff and see what you are left with. If it still looks dense and top-heavy, go back underneath and take out some of the lowest branches, as close to the main trunk as you can.

Oh, and from the outside, take out any branches that are not weeping - anything flying off in all directions (happy and partying, as it were, rather than weeping) is probably a shoot from the rootstock, and needs to be removed otherwise it will take over from the weeping branches. And considering that you bought it for the weeping branches, this would be a waste!

If some of your remaining branches are just too long, and are reaching the ground, then take hold of one at a time, work your way back up it to a point about a yard above the ground, and find the nearest small twig that is arching upwards and outwards, rather than inwards. Cut the branch just below this twig.

This retains the weeping outline, and reduces the chance of new growth pinging off in the wrong direction.

Having done all this work, sit back and enjoy it, and make a note to repeat the process once every year or so.

As an aside, the tree will never get any "higher" than it is: the height is dictated by the height of the graft. So although the stem will thicken, and the weeping growth will get longer and thicker, the overall tree won't get any higher. Well, not more than a couple of inches higher. This is why they are so popular - they really do stay small, and are ideal for front gardens, or for the smaller garden.

Now, all I need to do is decide whether I should do a Guerilla Gardening raid on this industrial estate, and sort out this poor little thing!

UPDATE: Yes, I did: check out Salix caprea: Guerilla Gardening for the full story!