Well, what else can you call it: 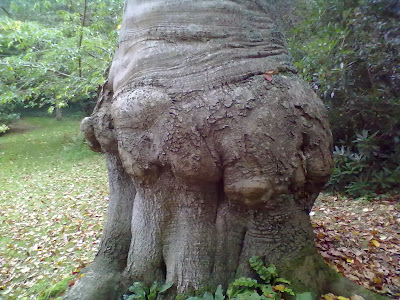 In case you're wondering what caused it, it can be damage to the young tree, usually from a too-tight tree support, or - more often, and definitely in the case of both the one above, and the one below - it's just a graft union. They tend to get increasingly ugly over time. 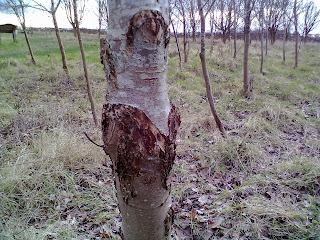 Here's another example of grafted trees that I spotted locally - how's that for hideous?

Looks like someone is bursting out of their corset, doesn't it?

Most annoyingly, it was one of a small grove of the same trees, all grafted, and all planted by one of those dippy-hippy eco groups who really ought to know better than to buy grafted trees when their stated aim is to plant up native woodland.

I can't believe that they were "unable" to find normally-grown trees, so did they choose the grafted ones because they were bigger and would create more impact, more quickly? Or did they just not notice that they were grafted?

Even worse - yes, even worse! - the rootstocks were producing suckers, which this group were utterly failing to remove. Anyone who knows anything about horticulture knows that when using grafted trees or plants, it is vital to remove all suckers and shoots from below the graft, as they will be from the rootstock, not from the desirable top material (scion is the technical term) and they will, by their very nature, be more vigorous than the scion. If they weren't, you wouldn't bother with a graft.

So by leaving these suckers, within a short time each desirable tree will have a thick understorey of competing rootstock shoots, which will shortly out-grow the top-worked material.

They mean well, these eco groups, but I do wish they'd put aside a little of their grant funding for consultation with experts, before wasting their money (which is often funded by taxpayers, that's you and me), and the efforts of their volunteers, in this way.

For that matter, I'd be happy to be consulted, at a reduced rate!!

So, if you are thinking of buying trees for your garden or to start a small native woodland, don't buy grafted ones!!
Posted by Rachel the Gardener at 09:38