Eggshells in compost - no! no!

For about the tenth time - don't put eggshells into your compost!

This is something that really gets me going: every book or article I have ever read about composting says that you should compost, among other no-nos, eggshells.

I can only assume that one person, somewhere back in the dim and distant past of gardening journalism, made this statement, having never made compost of their own, and everyone since has just copied what they said.

Last week I was digging into a newly-opened compost heap, and oh look, guess what I found: 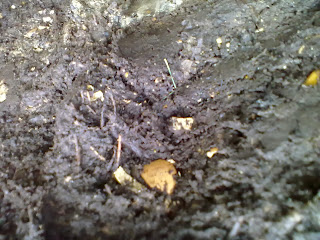 Yes, those are eggshells.

Complete, unbroken (despite the practically geological weight of peat-like compost above them) eggshells.

You can't see it in this photo, but there were actually four or five, neatly stacked inside each other, where the client has obviously tidied them up before tossing them in the compost. 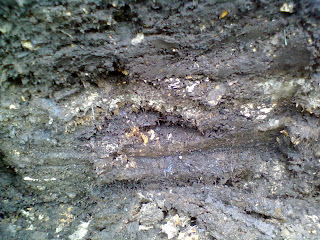 Here's the "cliff edge" of the compost: it's always interesting - well, to me, anyway - to see the different strata of the material.

Here, just above yet more eggshells,  you can see a lighter grey strip which would have been last winter, with ash from the open fire being added in a thick layer ("I keep telling them to stir it in or mix it up, but do they listen...?") directly covered by the thick peaty black layer which is probably the rich spring grass. 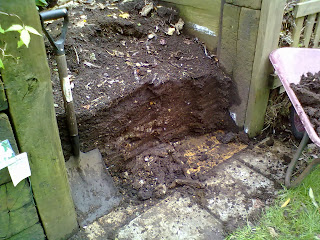 As you can see, and as I have said before, this particular Client's compost heaps break all the rules: they are set on a solid base of paving slabs, so there is no soil interaction and no drainage: they have solid sleeper sides and back, so there is no aeration at all. And the client piles on thick layers of grass with no attempt to mix in other material. And none of us ever even attempt to stir them, or turn them.

However, they make the most fantastic compost.

Why? Simply put, they are BIG, for a domestic garden: four feet across, six or more feet long, and at least three feet deep, although it sinks to a mere two feet or so of compacted compost.

They have no lid or horrible old carpet on top - the rain gets in, I also throw the occasional bucket of water on them if it's been dry, and I do take care to rake out the top of the pile so that there is a "dip" in the middle, not a conical heap, so that any rain that arrives is kept in the pile, and doesn't just wash off to the edges.

In my experience, more compost heaps fail for being too dry, than for being too wet, and virtually everywhere I work, I take this one simple step to keep the top of the heap flat or concave, to catch and keep water.

Oh, I also always make a point of stuffing the corners of the compost bins with plant material. Too many people heap the stuff up in the centre, which leaves hollow caves in the corners and around the edges. These are of course bone dry, so they don't rot down. Worms don't have teeth, they need it soft and wet!

Going back to eggshells for a moment - I could talk about compost all day - there is a supporting myth which says that eggshells are full of "goodness" and that's why we should put them on the compost heap.

Firstly, I would ask "who says?" along with a side order of "prove it!".  As far as I know, there is no scientific evidence as to the vitamin and mineral content of eggshells, nor to what degree any such "goodness" can be extracted from the shells.

I know that people give eggshells to their chickens in order to help them make better shells - a somewhat cannibalistic practice, I can't help thinking - but that's a physical matrix, like taking small stones to build a wall.

If it is possible for any of the "goodness" in an eggshell to be extracted, it is likely to be via water, so it would make more sense to take the water in which you boil the eggs, and tip that out onto your compost heap.

So what do we do with the eggshells?  Personally, I put them in the Kitchen Waste caddy along with any meat/fat trimmings and send them off to generate electricity but if you really want to keep them in the family, do please crush them into little teeny, tiny fragments before adding them to your compost heap.

Otherwise you will have to meet them again when it's time to spread the compost!
Posted by Rachel the Gardener at 08:47