Disaster in the high winds!

Well, I say "disaster", it wasn't really that bad..

.. on that very windy day last week, I arrived at the far end of the garden to see this: 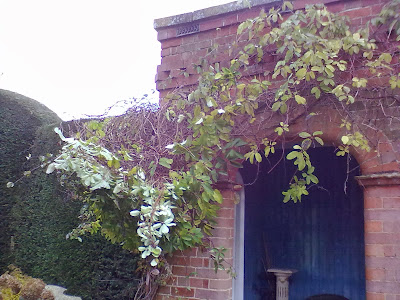 The Akebia had been blown right off the top half of the summerhouse!

"Oh dear," said my client, "you had better cut it right back."

No sooner said that done, and to be honest, I was quite glad of the excuse, as I think the summerhouse has some lovely brick detailing in it, and I love the carved-brick arches, so it can sometimes seem like a shame to cover it up, even with this lovely Akebia.

So I went and got the long-pole-with-a-knife and set to work, cutting out all the branches that were leaning off. 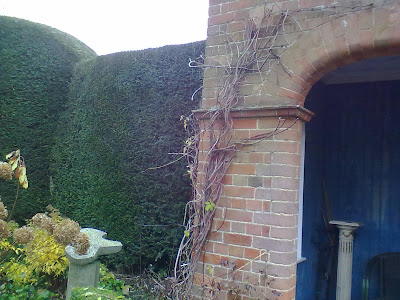 There you go, heartlessly bare, but I managed to save one set of upward-curving stems, so it wasn't a complete disaster after all.

And it does do a climber good to be cut back good and hard every few years: it's a chance to get out the dead wood that just harbours disease, and to promote a fresh flush of new growth.

Hopefully next spring we will see just such a flush, and the summerhouse will once again be leafy and green.

But in the meantime, I will enjoy admiring the brickwork!

Posted by Rachel the Gardener at 11:25