I've always refused to add Hellebore leaves to compost, on the grounds that they are tough, woody, spiky leaves, and I "have always heard" that they don't rot down very well.

Now, as you might know, if you have spent any time at all reading this blog, I have what might be called an Enquiring Mind, and as I came into professional gardening as an adult - as opposed to being apprenticed to some crusty old head gardener and accepting their word as law - I do rather tend to ask "why?" quite a lot.

Over the years I have learned - from asking "why?" - that a lot of the things we, as gardeners, are "told" to do are quite incorrect, or have no scientific background.

Conifers turning the ground around them acidic, for example: I did the experiment and it turned out not to be true at all. In fact, changes in soil pH were linked far more to depth of soil, than to what was growing above them.  More of that later.

And don't get me started on eggshells in compost heaps...

Anyway, Hellebore leaves: it always seems a waste not to compost them, but as mentioned, I have "always heard" that they don't rot.

So I tried it.

In January of this year I collected together a large pile of Hellebore leaves: I dithered between treating it as compost, ie mixed in with everything else and left open, or leaf mould, ie  just leaves, so in the end I did both.

I divided the pile in two, put half into a black plastic sack to be treated as leaf mould, and made the other half into a small compost heap with some mixed garden waste.

The two piles were left, hidden, in the clients' garden, to see what would happen.

Recently, I had a look. 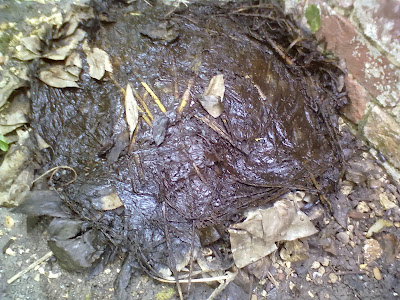 Here is the leaf mould bag,  ripped open - ignore the couple of dry leaves on top, they fell in when I opened it, and I was in a hurry to take the photo as, technically, I was working at the time (*looks around guiltily to see if my client is listening*).

As you can see, somewhat disappointing - the leaf stalks are complete and undamaged, and although the leaf blades have diminished, they have turned into an unpleasant slimy, fibrous mass.

Normally I would allow two years for leaf mould production, so you might think I'm being a bit unfair here - but after the best part of a year I would expect my leaf mould to be partially made, and certainly I would expect it to be "dry", not slimy like this.

The bag, which was originally stuffed  full to the top, had mushed down to just four or five inches of solid matter, which is good, but it was not making the sort of progress I would expect from leaf mould. 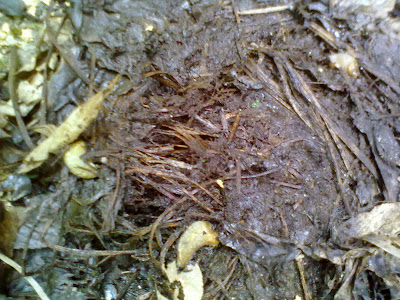 When I went and checked my composted pile, the story was very much the same - you can see here the strong fibrous mat, which is far from being nice crumbly compost.

And compost, by now, I would expect to be making significant progress towards completion, after the best part of a year.

So on balance, I would have to say that on the small scale, "they" are correct to say that it's not worth trying to compost/rot your Hellebore leaves.

This was, of course, only a very small-scale experiment, and I know from my own experience that if you have large enough compost bins, almost anything can be rotted successfully, but on the basis of this little test, I would come to the following conclusion:

Don't try to make leaf mould with them.

Put them in the council recycling bin if you have one, as they stand much more chance of being processed there, or add them to your bonfire pile and use their ashes around the garden instead.

In fact, some time after writing this post, I went to a Hellebore-breeding nursery, and they were adamant that Hellebore leaves should be burnt, in order to prevent the spread of that particular disease that causes black spots on the leaves.  So, in this case, my own common sense view was very much in line with that of the professionals, which is nice.

Conclusion: Clear Up Hellebore Leaves And Burn Them!

Posted by Rachel the Gardener at 09:43