I came across this phrase the other day, and thought "what a lovely expression".

"Tousled meadows" exactly describes the sort of mowing that I get lumbered with am asked to do - that's why I was so pleased to get a chance to do some proper scything the other day, in the big paddock.

And as for the badgered wheat, I had never heard the phrase before, but somehow I knew exactly what they meant: instead of  nice neat upstanding wheat, easy to reap, you get a tangled mess of stuff lying in all directions.

The dictionary definition of "badgered" :

"To tease or annoy, as a badger when baited; to worry or irritate persistently."

So there I was at 6.45 the other morning, standing in a tousled meadow, looking at the badgered grasses.

My client and I had been discussing the generally poor performance of the meadow this year, with me firmly of the view that we should never have allowed the Cow Parsley to get a hold two years ago.

We've had hardly any wild flowers this season - a few horseshoe vetch, some clovers, meadow buttercup of course, but not much else besides, and the grass was definitely getting stronger and taller than ever before - probably due to the reduction of the semi-parasitical Yellow Rattle (Rhianthus minor).

So we have been assiduously pulling up the cow parsley ( I say "we" but of course I mean "I") and spraying certain areas with Verdone - lawn weed killer, kills broadleaves but does not kill grass, allegedly - and, in moments of stress, I have even resorted to just ripping off the flowering heads to prevent them from seeding. 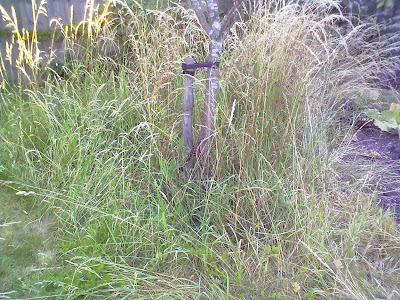 So here is one small corner of the meadow.

As you can see, nil in the way of wildflowers, and the grass is getting rank: instead of the smaller knee-high varieties, we appear to be overtaken by waist-high stuff, which is not as attractive, and which "badgers" easily.

There's a crab apple in amongst all that lot,  it used to have a nice neat planting hole around it, but the meadow grass has somewhat smothered the area.

Ten minutes with the scythe later: 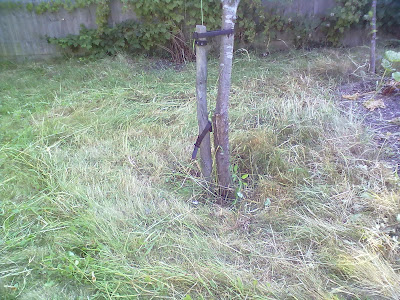 There you go! Much better.

It is still rough old grass, and there are molehills - the enemy of all scythers. Scythemen? What do you call people who scythe?

No, not Reapers, grim or otherwise *laughs*,  because "reaping" is where you are cutting something with a crop at the top of it, a grain such as wheat or barley.

Cutting grass - for a hay crop, or just for neatness - is called "mowing" so I could be a Mower-man, I suppose. "Man" in this context is, of course, short for "human" so we don't need to get involved with any of that silly "chair-person"  rubbish.

Once I had scythed off all the tousled grass, I discovered - having forgotten to bring along my pitchfork for tidying up the grass - that I could use the scythe to gently roll the cut stuff up into a sausage, which was easy to pick up and cart off to the grass pile.

I am not at all sure that the supplier of the scythe would be pleased to see me doing it! 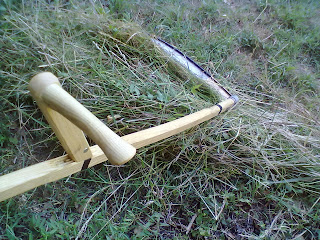 Here's my scythe being used to roll up the grass:

Doesn't it still look clean and new? Who said the camera never lies? It's actually covered in grass stains, mud, and yes, I admit it, blood, from where I was merrily scything under a hedge (The Merry Mower-Man? The Merry Mower-Maid? Oh good lord no, far too much like a folk song *theatrical shudder*) and didn't realise that the hedge contained huge brambles, which grabbed my left hand as I completed a swing, and ripped it right open.

Blood! Blood everywhere! Oh, how I suffer for my job. (Cries of "sympathy! sympathy!")

Er hem, sorry about that, on with the plot - having done all the work I had been asked to do, and the sun not yet being hot, I decided to re-cut the bit under the Black Walnut tree, to see what sort of job a scythe makes of short grass.

Here it is: earlier this season this area was waist-high in cow parsley, with an underplanting of Hogweed, despite an application of Verdone in spring. We re-sprayed, despite the instructions to "only apply once per year" and it managed to kill off quite a lot. I hand-pulled a couple of barrows-full, and ripped the heads off some more that came through, and on balance it wasn't too bad. By last week, the grass was actually starting to recover, and there were tufts to be seen: 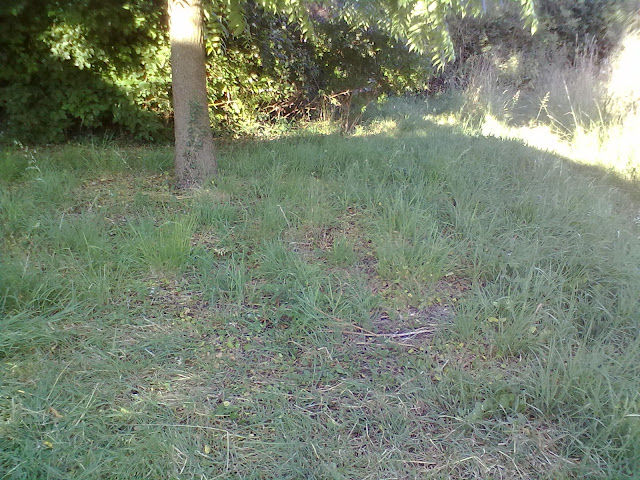 ...so I set to work, concentrating on getting a nice even swing, and reduced it down to this: 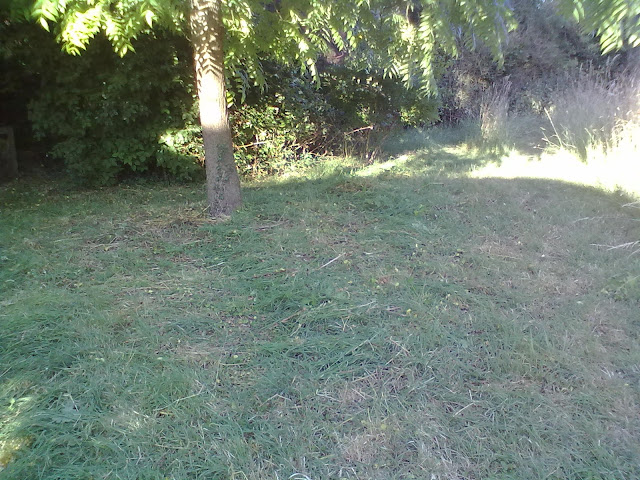 Go on, admit it, you can't see the difference, can you?

I can - although while I was scything it didn't seem to have much effect, by the end I could see my windrows - long rows of cut grass - and it was now evenly short. Well, if I were being totally honest, unevenly short. I'm no expert scyther! (nope, I don't like "scyther"  as a name: having just googled it, apparently it's a Pokemon species. Say no more.)  But overall I'm quite impressed with the effect of a scythe on tufty grass,  handled by an only moderately competent operator (nope, I don't like "operator" at all. Might have to go with Mower-Maid. *sigh*).

I don't think I'd care to attempt to cut a lawn with my scythe, but I'm now quite happy to work on fairly short grass, as well as long grass.

All I had to do then was go and rip off the ivy trying to grow up the trunk - one of my pet hates - and I was done with the meadow.

Best of all, I'd completed the work, and the extra experimental  short-tufts-mowing, with no-one being any the wiser, as the scythe is so quiet. I absolutely cannot imagine getting a strimmer going before 7am, can you?!

Posted by Rachel the Gardener at 11:02

Email ThisBlogThis!Share to TwitterShare to FacebookShare to Pinterest
Labels: Scythe