Ivy: on walls and on trees

I hate, loathe and detest ivy. Yup, I'll come right out and say it, I hate the stuff. I know the bees love it, and it's an important nectar source for the tail end of the year, but in gardens? Seriously, no thank you.

From my many years working as part of a canal restoration group, I can assure all suburban gardeners out there that there are miles upon miles of mature ivy all over the country, and it really is not necessary for domestic-scale gardeners to allow their smaller gardens to be swamped by monstrous growths of ivy.

Yesterday I was doing a one-off job locally, where the lady owner was quite upset at the horrendous growth of ivy coming over the back party wall: she had done her best to cut it off as high as she could reach, but it was actually coming under and through the wall as well.

Yes, I did say "through" the wall: a lot of garden walls (the sort you find dividing plots on modern housing estates) are built of only one thickness of brick. This is known as a half-brick thickness wall (don't you love these jargon terms?) and are easily spotted because when you look at them, all you can see are long edges of bricks. 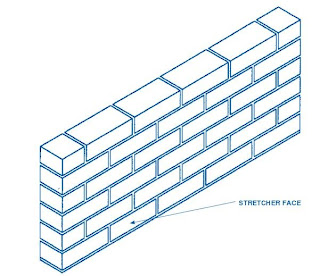 There you go - look familiar?

The problem is that ivy shoots can easily work their way through any tiny weakness in the mortar and can end up popping out on the other side.

Then, as the shoot grows and enlarges, it displaces the mortar: and as it enlarges further, it can push the bricks apart, leading to the collapse of the wall.

This doesn't happen on house walls, generally speaking: they are made more sturdily, of a double layer of bricks  and are better pointed (the mortar between the joints) - the old prejudice about ivy on houses dates back to the days of lime mortar, which was easily penetrated by ivy roots. On modern houses, it merely grows over the windows, rips off the gutters, and makes your house look as though it's derelict. Well, that's my opinion!

In this case, I suggested that the lady owner pop round and ask the neighbour backing onto her whether they'd be kind enough to clear the ivy off: as in most of these cases, something which the houseowner had not even considered doing, and - again, as in most cases - the neighbour was as nice as pie about it, saying that they had "no idea" there was so much ivy there, and agreeing to pull off as much as they could, the very next day.

Honestly, it is well worth having a quiet word as soon as you notice something like this, rather than letting it go on for years and merely heaping curses upon the unknowing neighbour. The same goes for hedges, conifers, trees, etc: it's always better to go round and ask them before you start getting really cross about it. Approaching them in a fighting spirit is NOT the way to get it done: a calm approach along the lines of "I wonder if you'd be kind enough to.." is much better.

And in the rare cases where you meet refusal, well, then we go to Other Methods, which I won't discuss here!

Another example of Horrible Ivy in a different garden is here - just look at this plum tree branch: 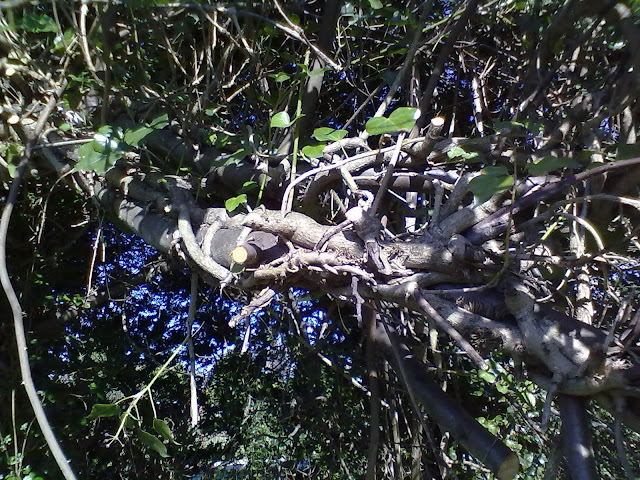 In case you can't make sense of what you are seeing, there is a dark grey tree branch coming towards us, being strangled by the lighter grey ivy, which, in the case of the strand above the branch, is very nearly as thick as the branch itself.

The weight of all this ivy had caused the plum tree's branches to lean over so far that the tips were sweeping the ground, and although this should have made it easier to get at the crop, in fact the tree was so smothered in ivy that we couldn't even see any crop, let alone get to it.

Drastic measures were called for, and my client agreed that the only thing to do was to remove the worst affected limbs altogether, as it was completely impossible to remove the ivy from the branches, and that edge of the garden was disappearing under the ivy.

Half an hour with a bowsaw later, and the garden was miraculously enlarged by some five yards or more!

Even once I had this branch on the ground in pieces, it was still impossible to remove the ivy, it was welded that fast to the bark. So I took (with permission, of course) a few lengths of it for my friend  Morag, who has a small lathe,  and who had expressed an interest in irregular fruit tree wood, to see if she could extract something lovely from it.

So there you are, two reasons for my dislike of ivy, along with reassurance that although yes, the bees love and need it, there is plenty of it out there and you don't need to sacrifice your garden to the God of Ivy.

Posted by Rachel the Gardener at 11:59