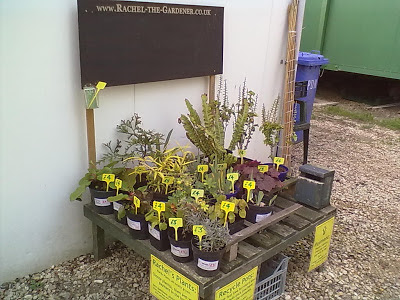 It's been there a while, and it was getting a bit tatty - so I decided it was time to repaint my sales bench up at Dews Meadow Farm Shop (shameless plug) which is on the A338 just north of Wantage.

The blackboard top is working very well, I use it to draw attention to new plants, or to promote particular lines: it's also self-cleaning, as the rain removes the chalk!

The rest of the bench, however, does not clean itself, and it's getting quite tired-looking.

They close on Tuesdays, so after work on Monday I headed up there, took off all the plants, removed the printed signs, wiped off all the cobwebs, and repainted it. 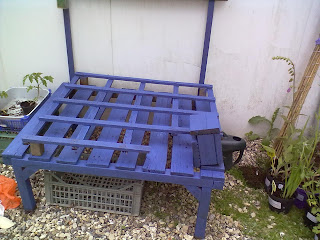 Here it is, freshly painted and looking much, much better than it did.

The Honesty Box on the corner is tilted forward to allow the underneath part to dry, in case you are wondering why it is at such a crazy angle.

Painting the bench has made me aware that it's getting a bit decayed now, so I will have to think about replacing it with a newer one - but I think it will hold out for another few months yet. 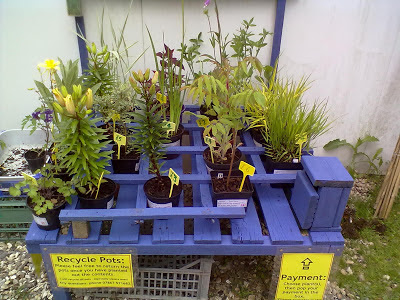 Then on Tuesday afternoon, having given it plenty of time to dry, I popped back, and restocked the bench with some fresh plants, newly labelled, and some new printed signs to replace the old ones, which were getting a bit faded.

On the left-hand side - not visible from here - is the Rachel's Plants sign, as that is the side that faces the shop door and the car park, so people will see it first.

On this side I have the note about recycling pots, to encourage people to bring them back for re-use, along with what turned out to be a very necessary sign pointing out where the payment box is.

Yes, I know that painting it the same colour as the bench is not the best idea!  I suppose bright yellow might make it stand out...

So there you go, that's that job done for the summer.

Talking of which, it's raining again today.