For the last couple of months, one of my clients has been considering changing a short length of box hedging into something more interesting, and each time I arrived I would find canes in various places, loops of rope, or small areas chopped out of it, as she experimented with various looks.

At one point it was going to be another cloud hedge: then it was going to have regular rises and falls, and several notches were cut in the top to see what that would look like - luckily, box is very forgiving, and keeps on growing back!

Last week the decision was made: it's to be a wavy-topped hedge, a little higher than it is at present, with rounded ends and two main humps.

Here is the existing hedge, somewhat in need of a trim as we'd been letting it grow for a while on the grounds that we weren't sure how much of it we would need: 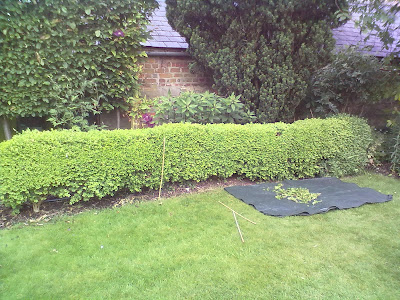 Canes were put in to mark the position of the two "dips", and were cut to the right height. The plan is to allow the sections between the dips to grow a little higher than they are at present, so it's going to look a bit odd for a while.

I cut across the top of the hedge first, to get the right height: then cut the front and back in the normal way, then tapered off the dip once I could see where I was. I also rounded off the far right-hand end.

Here is the first dip in place - as you can see, nasty bare brown stems have been revealed, but they will quickly "green up". 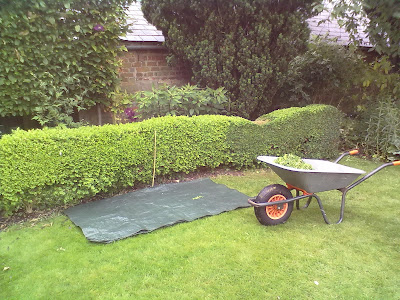 Here's the second dip, just starting: the first cut straight across from front to back, using secateurs, (as many of the stems are tough and woody) revealing the bare brown inner stems. 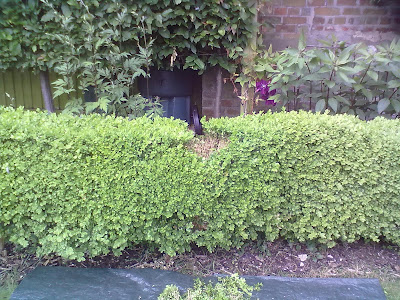 And here is the same dip after using the shears to clip the front face and the back face, which drastically improves the look of the new part, then levelling off the new dip. I also lightly clipped the top edge, even though we want it higher: light clipping encourages bushy growth, so although it seems the wrong thing to do, it will result in a stronger hedge. 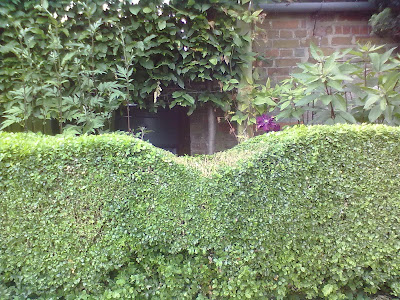 And here is the finished article, looking somewhat lumpy, due to the earlier try-outs, but once those smaller dips have filled in, we should have a sort of upside down "swag". 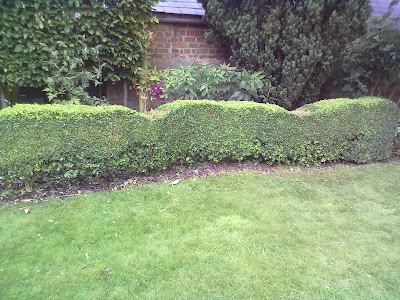 As always after clipping box, we gave it a good feed and some water,  and now we will leave it for a few weeks to "fluff up".

And if we don't like it, we can always cut it into something different!
Posted by Rachel the Gardener at 08:59