Several years ago, I encountered - for the first time -  some Common Spotted Orchids in one of my clients' gardens:  they were spreading slowly from the garden next door, whose owners were so proud of them that they marked each plant individually so that visitors (both these gardens are Open Gardens) could see them, and not tread on them.

Each year they increased, until now they are positively living up to their name, and the neighbours no longer bother to mark them - although they still take the trouble to check them each year, and keep the area clear of any smothering weeds. 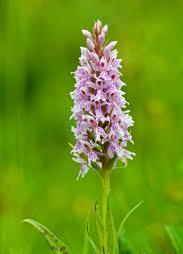 In case you are not familiar with them, this is what they look like: the correct name is Dactylorhiza fuchsii, and the "fuchsia" part of the name should give you a largish clue as to what they look like, and what colour they are.

This picture is about life-size - they are quite small, dainty little things, standing about 6" high - ooer, what's that in modern? About 15cm, or a little less.

Close up, those flowers are marvellous, and very typical of orchids, if rather on the small size:  but of course it's not easy to see them, unless you are prepared to get down on your hands and knees.

The leaves appear first, and are quite distinctively blotched:  in "my" garden, one of my weekly tasks is now to patrol the grassy path in between mowings, and dig out any that I find there, so I have become very good at spotting them as soon as they make the first leaf or two.

It might seem a bit hard-hearted, to dig up orchids, but trust me, if they weren't rescued, their heads would be chopped off by the mower, so it's better that they take their chances of relocation - and so far, I am doing quite well with my re-planting.

Just in case,  my cunning plan is to establish various colonies around the garden - as well as places where they choose to pop up of their own accord - and to date, I have two established colonies, and one new one for this year. 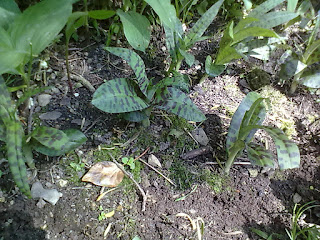 This is the first of my established colonies - I've been moving them here for about four years now. It's a shady spot next to the summerhouse, with Lily of the Valley (Convallaria majalis) marking the area out in early spring, and with a lot of plum overhead.

As you can see, the plants are growing strongly and are quite lush, and are just thinking about flowering.  Some of them have been here for four years now,  and they have flowered every year, to a greater or lesser degree. The main problem is the new shoots being nibbled by the bunnies before they can flower, so in earlier years I have protected the area with chicken wire and sticks. This year, however, all went well: my cunning plan to hide the orchids under the Lily of the Valley worked well, and they are (so far) uneaten. 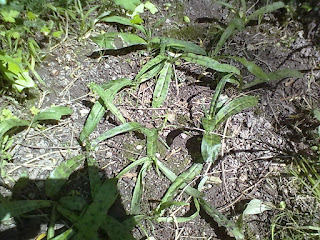 Here is my second site: these are the ones that I rescued last year, and moved into a fairly sunny spot, to see if they establish better in sun or in shade.

Both of these sites should be safe *mock stern glare at client* from the mower.

In early spring there are a mass of snowdrops here, but they're all gone by now, so hopefully this will be a good site for them.

The third site is the new one, chosen just two weeks ago, when I unexpectedly found another colony of the orchids on the grassy path beside the lake. Due to the constant rain, the client had been unable to mow, and the grass was very long and shaggy: and I found several dozen small orchid plants there. It is quite possible that they've been trying to grow there for the last couple of years, but this is the first time that they've had time to get properly above ground before being beheaded.

Excitedly, I carefully extracted them from the path, and have re-planted them on the bank above the path. It's well drained and chalky - just what they are supposed to like - and best of all, they will be at knee height, sheltered by the Hellebores. It is my fond hope that this time next year, we will have quite a nice little swathe of them at an easy-to-view height, in addition to the two clumps I have already formed.

There is some indication on the internet that orchids require a special relationship with specific symbiotic fungi: well, so far, most of the ones that I move have survived, so either the relevant fungus is more prevalent than one would suppose, or that information is not strictly accurate.

I have collected seed every year, and have been successful in raising some plants from seed, so I do now have a limited number of pots of this lovely little plant for sale. They like it to be shady, preferably dappled shade: they are happy to grow in grass, but not a "lawn": it must be grass that isn't cut while they are growing and flowering, for the obvious reason: and as well as being grass that isn't ever treated for weeds or moss, it must also be grass that is not ever fertilised, for the slightly less obvious reason that too much Phosphate kills them. Given the choice, they would prefer to grow on chalky soil, they like it well drained, and not too rich.

Apart from those requirements, they are quite straightforward (!) and are a lovely addition to a wild corner of the garden. Oh, and no, they are not "protected" - the word "common" in their name is a bit of a clue!
Posted by Rachel the Gardener at 16:48