Up at my yard, one of the tumbledown buildings which edges the yard has been used as a roosting spot by a local Barn Owl for a while now.

I sometimes see him if I walk past the fields above the farm in the early morning, or at dusk: he swoops silently up, across and down the field in a regular flight pattern, presumably one approved by the local Avian Aviation Authority as producing the most efficient fuel-to-food ratio?

If you've ever seen documentaries of owls eating, or seen them live, then you'll know that they swoop down on unsuspecting small mammals such as voles, shrews, field mice etc, and swallow them whole. After a few hours of digestion, they regurgitate the bits they can't use, which is basically just the fur, feathers and the bones. Oh, and beetle shells. This lot comes up as a neat cigar-shaped pellet, which they spit out and which falls to the floor beneath their perch. Oh, stop going "Eeeeuuuw!", I can hear you!  It's only because they don't have hands as we do, so they can't carefully pick out the bones. Instead, they have an extra section to their intestine, the gizzard: first the prey item goes into the stomach where the meat and yummy bits are removed: the good stuff goes down into the small intestine for digestion, and the sharp, dangerous bones etc are moved into the gizzard where they are compressed into a neat package, with feathers and fur on the outside, so that they don't do any damage on the way up.

The owl then "heeuck"s up the pellet, safely and neatly.

These pellets can be dissected, which is not only kinda fun to do, but great for grossing out the kids: and let's face it, kids of any age just love icky revolting things. This is a great project for schools, of pretty much any age, as there is so much that you can teach the kids while they are going through this process.

Firstly, obtain your owl pellets. They're not actually that easy to get hold of,  unless you happen to know someone with access to some tatty old barns (*preens slightly*), although you can buy them on ebay. No really, you can buy them on ebay, imported from either France or the USA: I have no idea why there are no UK sellers.  Hmm, that's an idea, perhaps I could become the main UK seller of barn pellets! No, too many Health and Safety implications... the ones for sale are advertised as being sterilised "in the approved manner" (without actually telling us what that entails) so there are bound to be strange restrictions.

Sensibly, all you need to do is either wear protective gloves, or make darn sure to wash your hands very thoroughly afterwards.  I found that I didn't at any time actually touch the pellets or the bones, I used two lolly sticks - oh yes, nothing but the best here - for the initial breaking open of the pellet, then I went to tweezers and a dissection probe left over from my A level dissection kit. I knew I'd kept it for a reason. Two pairs of tweezers would work, or cocktail sticks: anything small and pointed, as it's very fiddly work to gently get all the hairs off the bones.

Which are tiny! Tiny!

So, I collected a couple of pellets, they look just like poo, but they are not: they are firm, solid, dry, non-smelly, and quite inoffensive. The options are to dissect them dry, by freezing them - what! Owl pellets in my freezer?! No thank you! - or wet, by soaking them for a couple of days. 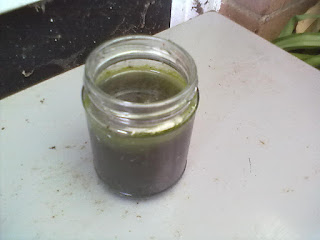 As you can guess, I take the easy option, and pop them into a small jar of water (right) and leave them for two days.

At this point, life caught up with me: it stopped raining, and I was overloaded with work, lots of gardening to catch up on,  lots of seedlings to pot on, courgettes to harden off, french beans to germinate, etc and that's not even mentioning having to entirely redecorate my downstairs cloakroom, quite literally from ceiling to floor, taking in walls, skirting boards and pipes along the way after a "simple" plumbing job turned out to be not quite that straightforward after all... anyway, long story short, it was about a week later than I went back to the jar.

Pooey whiff! Oh boy, did it smell.  Not the fault of the contents, but of my fault for leaving it so long. 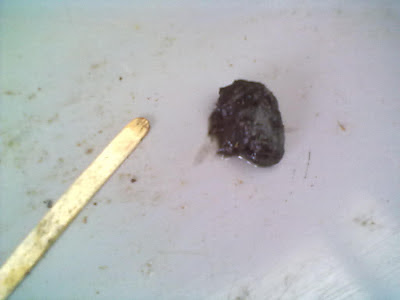 Here is the result, once I'd got rid of the green and foul-smelling water: one nice soft owl pellet.

As  you can see, it doesn't look like much!

In fact, I have to be honest, it does look a bit like a poo, but you have to keep telling yourself that it's not a poo, it's a pellet that has been carefully regurgitated. And in case you were wondering, yes, owls do also poo in the normal way. 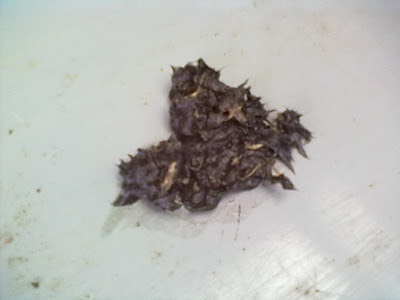 Drat, I should have added a ruler so that you could see the scale of these things. Sorry. 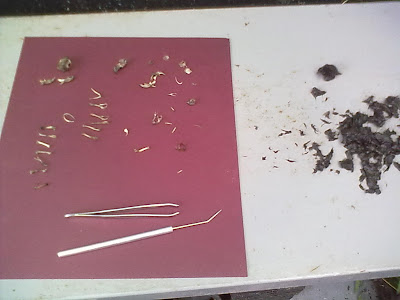 Now for the fun bit - using a probe and an old pair of tweezers, I carefully went through the soggy mass, extracting everything solid.

You do have to keep saying to yourself "it's fur, it's not poo" but after about five minutes I had completely forgotten the "ick" factor and was utterly absorbed in not missing the tiniest, tiniest bone.

I found it was actually a big help doing this on a metal base - in my case, the shelf in my porch - as you can hear the difference between soft fur, and the bones and hard parts

Here is my sheet of extracted bones:  I haven't made any attempt to sort or reconstruct, other than to group them roughly together by shape. It's immediately apparent that this night's hunting contained two small mammals, as I have two tiny skulls, and four little lower jaws. My guess is voles, judging by the skulls: probably field voles. 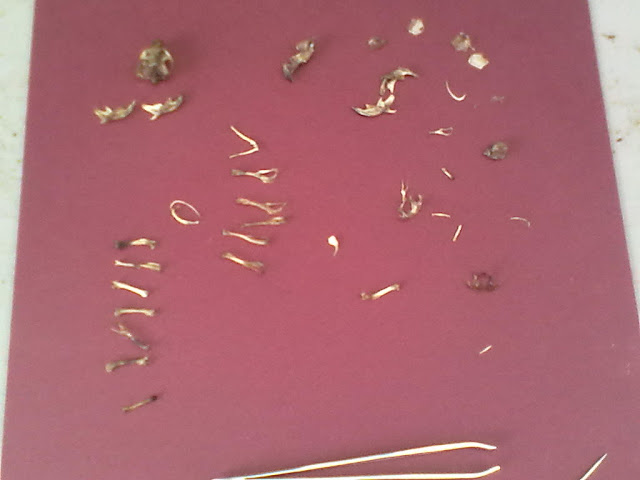 Apologies as always for the quality of the pictures, taken with my camera-phone; next time I will get out my real camera and see if I can do better.

So there you go, a fascinating new hobby, except that I am so busy that I might collect some pellets and keep them until next winter, when I will have more time to deal with them.
Posted by Rachel the Gardener at 20:05