A barrow full of Mulberry

Oh, what a lucky gardener I am: in my care, I have two superb specimens of Mulberry - Morus nigra - which require regular attention.

Traditionally, the rule is that you don't prune Mulberry after about mid-February, otherwise they "bleed" sap for a long time afterwards, which can lead to infection and death.

However, this spring I have noticed with both of the Mulberries in my care that a really high proportion of branches are quite, quite dead.

Why remove the dead stuff? Usual RHS rules apply: we remove dead branches because they congest the tree unnecessarily, which can lead to disease: and, as always with Mulberry, there is a danger of dead branches breaking off, leaving rough wounds which, again, can allow disease to get in.

The additional, unofficial reason is "to allow your gardener to clamber around inside and under the canopy more easily, without being constantly poked by dead branches."

Yes, I really am Rachel the Selfish Gardener. Well, sometimes.

So, today I took my trusty bowsaw and my current secateurs into the breach (dear friends) and removed several barrows of dead wood. Here's one of them: 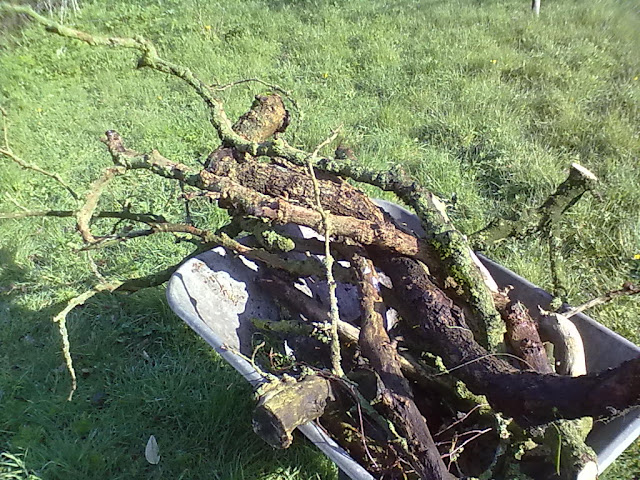 As you can see, some of these branches are so dead that they are black - some are green with moss and lichens; and some are white with fungal growth, yuck.

There were also a few bucketfuls of small twigs that were "nipped off" with the secateurs.

Result: cleaner, better-looking lower canopy, much more pleasant for working under - and there is yet more weeding to be done there - and best of all, as all this wood was already dead, no bleeding of wounds.
Posted by Rachel the Gardener at 11:11