Rhubarb - wish I liked it!

Yesterday, squeezing in a couple of hours' work between the showers, my client asked me to pull some rhubarb for her: she's an elderly lady, and can no longer manage the "twist-and-pull" without falling over and hurting herself, so most weeks when I work there, I pull her a handful.

She always offer me some, as there is usually quite a lot to be pulled.

Here is the selection from yesterday: 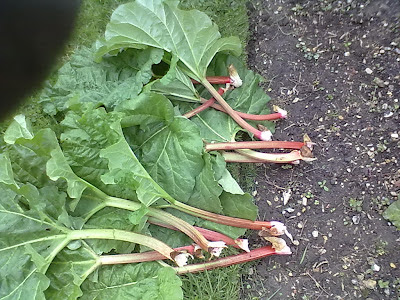 ...and I wish I had left a glove or something next to them, as a scale: they don't look anything special in the photo, but they were huge! Massive leaves, stems at least twice as thick as anything I saw last year, certainly thicker than anything I've seen for sale in the supermarket - and mostly a good red colour, as well.

I'm not sure if redness equates to flavour - if anyone knows, do feel free to enlighten me. It seems unlikely, as the large leaves form a dense canopy over the crown, so I can't imagine that the stems are reddening in response to the sun....

Here is part of the rhubarb patch, after pulling - as you can see, lush green growth and I barely made a dent in it by taking out a big double handful. 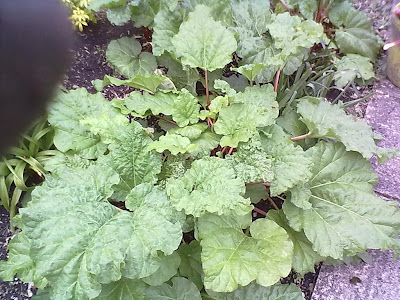 And the really sad part is that I always say "no, thank you," as I don't care for rhubarb at all - the flavour of it is merely "well, ok", the texture of it is usually a bit on the mushy side, and you have to add a shocking amount of sugar to it, which makes my puritan soul rebel!

So alas, free rhubarb but I don't take any.

Plums, now, that would be a different story...
Posted by Rachel the Gardener at 16:47