I had a stack of willow wands in my front porch a while ago: I was making willow wigwams for sale. Doing this invariably creates a fair amount of mess, and various trimmed-off ends etc, all of which I put into bags, along with other potting-up mess and dead plant materials.

The bags go in the garage until such time as I have a car-load, at which point I load up the car and take them all down the dump.

Yesterday I was putting some more bags into the garage when I noticed something strange protruding from one of the older bags of waste. 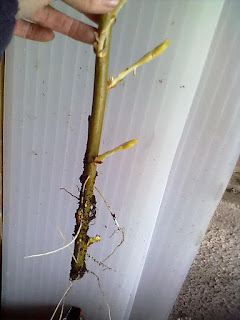 Yes, it's a length of discarded willow, shoved into a black compost bag, along with various plant waste, stale compost etc, put into the garage some weeks ago,and look, it now has branches, leaves just beginning, and quite a good root system developing.

This just goes to show how amazing willow is: as Enid Blyton said in The Secret Island: "willows are full of life, and you can't stamp it out of them."

What - don't tell me you didn't read that one? The story of Mike, Peggy and Nora,  abandoned by their rather reckless adventuring parents, then abused and made to work by their cruel aunt and uncle: then running away with local lad Jack who shows them how to keep chickens and a cow, how to grow food, and how to build a house from willow. Possibly the first appearance in literature of a Living Willow sculpture, and I am constantly amazed that no-one has yet asked me to recreate one for their children.

Going back to the wigwams, under the general heading of "isn't it always the way": I made them back in February, but it was too cold to stand outdoors making them for long, so I just did half a dozen or so, then stopped.  I put three of them up at Dews Meadow Farm Shop, and they sat there for weeks.

"Oh," I thought, "good thing I didn't waste time making any more of them than I did."

Then the weather warmed up and they started selling:  within a couple of weeks I'd sold all of them, and was scratching around to find more willow. After a while, I couldn't find any more material to make any more.  And I've had enquiries ever week since - one lady even wanted to buy 5 of them.

So, lesson learned: next year I will make up as many of them as I have material for, and will store them in the garage until the weather gets warmer.

I even have one lady who wanted me to do a workshop in how to make them! And, now I think about it, I was asked by a local gardening society to do a workshop on this very subject, but they contacted me in June, and it was a bit tricky trying to explain why you can only get the materials in winter.

So I really must find a better source: if anyone in or around Wantage has a good-sized stand or hedge of willow that they coppice/pollard/generally chop every year, and who usually just throws out the cuttings, do please contact me.  Osier is best - that's Salix viminalis, or Salix purpurea.   Anything that grows long thin whippy twigs, and when I say "long" I mean a minimum of 6 ft (2m) of new unbranched growth each year.

Hoping to hear from someone!
Posted by Rachel the Gardener at 16:33