I've just trawled back through the blog, and although I could have sworn I had written about this last year, apparently I didn't.

Right! Winter potatoes, then! Oh dear, have I given away the ending in the title? Will you still read on? Aw, go on, read on, there's always something to learn from other people's failures...

A couple of years ago, one of my clients asked me about planting potatoes in autumn, in order to have a crop of new potatoes for Christmas.

It sounded unlikely, but I went away and did the research, and sure enough, it is entirely possible: the instructions were to plant out potatoes in late autumn, while the soil was still warm, in the hopes that they would grow and produce tubers in time for Christmas. There are even special late-season seed spuds that you can buy for the purpose.  We did it that year, and it worked. Not spectacularly, there wasn't much of a crop, but considering that we used left-overs from the kitchen, it wasn't bad. And it provided enough for my client to have two meals over Christmas.

We did exactly what the internet suggested: planted out our spuds in September, let them grow - watering was not an issue, that year! - and I dug them up in late December. I think we started with about a dozen small tubers, and I lifted about two double-handfuls of tiny new potatoes.

This year - or rather, last year - we decided to try again, but this time to combine the "late spuds" with the "no dig  under plastic" idea which I have known about for years, but have never tried.

Have you encountered this one? You prepare the ground, spread black plastic over the bed, pinning down the edges or burying them in the soil, then cut slits and plant the potatoes through the 'oles.

When the foliage dies down, you cut off the tops and lift the plastic to reveal the tubers sitting on the surface, with no digging required. At least, that's the idea. I've seen pictures in books, but never seen it done in real life. The idea is that you don't need to earth up the plants as they grow, being under the black plastic is enough to keep the light out and prevent the tubers going green - which is, of course, the point of earthing up. 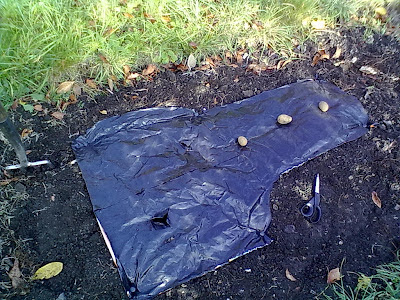 OK, hold onto your hats, into the time machine, and here we are back in early October of last year, 2011.

Wow, look at that autumn sunshine.

I laid out our black plastic and pegged it down - sharp-eyed readers will instantly spot that it's a compost bag, sides slit and turned printed-side down.

Well, why not? They are free, after all, and re-using is as good as re-cycling. In fact, re-using is better than re-cycling, as you are, by definition, not buying something new! 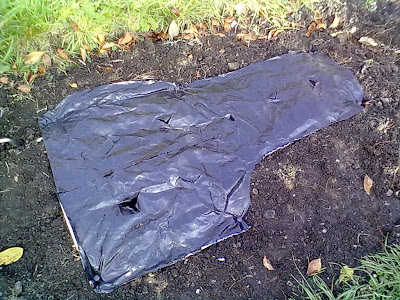 Right,here we are with the job done: the potatoes have been pushed through those little cross-cuts in the plastic, and pushed down a couple of inches into the soil below.

Oh, forgot to mention that of course I had dug over the bed beforehand, removed all weeds, raked to a fine tilth etc etc. 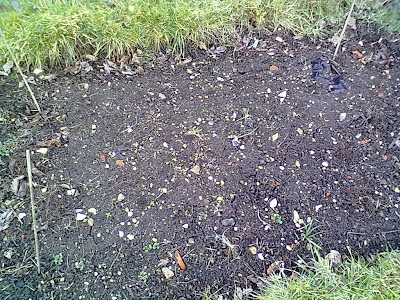 Having done the planting, I made the decision to cover the plastic lightly with soil, mostly for cosmetic reasons: I didn't think the black plastic looked too classy, and this is, after all, a part of my client's garden, not an allotment.

So a light sprinkling of soil was added, with sticks to mark the corners so I wouldn't forget where I'd planted them.

For the first few weeks, while it was dry and sunny, I watered the area, not at all sure if you were supposed to: after all, laying black plastic down does more-or-less prevent all rain from reaching the tubers..

Now we have to imagine that we are watching a sci-ci film about travelling through time: kindly imagine the pages peeling off a calendar, or perhaps, as this is a gardening blog, imagine a speeded-up film of the leaves going brown, falling,  bare branches, snow, snow disappearing, and so on. 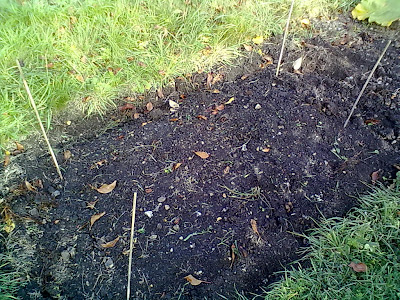 Here's the scene in December: not a single leaf. Not one.

I think this counts as pathetic failure, don't you?

Having other tasks to do in the garden, I just left them sitting there all through the winter. 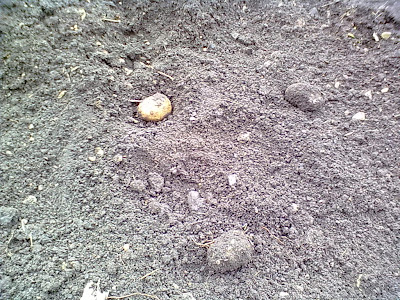 Eventually, in February, I found time to peel off the plastic and see what lay beneath.

A little gentle forking revealed just three potatoes, all of which were the original ones which I planted out.

One was firm and pristine, as you can see - the others were black and mushy.

So, lessons learned: although it is perfectly possible to grow a late crop of spuds in time for Christmas, it doesn't work if you plant them under plastic. Was it wrong to put some soil on top? Perhaps that covered up the slits to the extent that the sprouts couldn't find the 'oles? Hmm, not really, as I didn't find any rotted stalks below the plastic - and of the three originals that I found, none had any signs of sprouting.

And what about normal summer spuds, under plastic? Well, I suppose I might have a go in someone else's garden this summer - I don't think I dare suggest it to this client, I think she's supported my experimentation enough this season!

If any of you out there have experience of the Black Plastic Potato System, I'd love to hear about it, whether it went well, or whether it failed.
Posted by Rachel the Gardener at 12:54