I recently arrived at a client's garden, and on my way to locate the wheelbarrow (they do just wander off by themselves, don't they?) I was staggered to see how much Bryony had grown.

Last time I looked, it was a neat topiary.

This day, it was a mad fluff of Lonicera nitida. 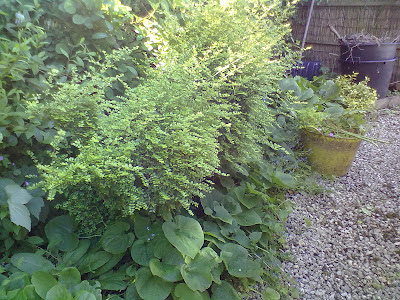 Just look at that! What, exactly, is it supposed to be?

Regular readers will remember Brian the Snail, who had to be completely re-shaped after a friend pointed out that I made the spiral of his shell pointing upwards, instead of sideways: honestly,  you'd think that someone who worked in gardens all day every day, of all people, would know what a snail looked like, wouldn't you?

Apparently not - I just kill the perishers, barely glancing at them. And I feel NO SHAME!! Don't bother writing to me to tell me what a wonderful job slugs and snails do in the garden, I am well aware of it, but this year we have been completely over-run with them, and it has become necessary to take stern measures.  My current favourite is to crunch them with the secateurs then lob them onto the path or the lawn, so that the birds can come down and get them.

Right, back to the topiary: first jobs first: restore the head.

This is basically a simple sphere, so I just clip it back with the shears, taking great care not to chop off either of the horns.

Note: if you are ever presented with a madly over-grown topiary, make sure to ask what it was before you start cutting: ask for photos of it if possible, and if not, take off your gloves and run your hands through it to see what the solid shape was, being particularly careful to feel for protruding beaks, tails, etc. 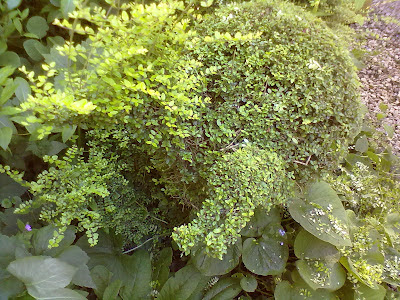 Now you can see that the shape of the round head is back, along with one of the horns, which rises up, curves forward, then splits into two.

I do the delicate parts with secateurs, using the other hand to hold the part steady.

It's always better to do topiary on a calm day, by the way: it can be terribly distracting when the wind makes the whole thing sway, just as you are about to make a decisive clip...

The horns, in case you are interested, are natural branches, they are not wired into place. This is achieved by initially leaving out two branches that are heading in more-or-less the right direction, and continually clipping back all their side-shoots until they are thick enough.

Then I allowed one shoot on each to grow at a right-angle, pointing forward: when they reached 6" or so, I cut off the tips and then continued to clip back all their side-growth until they had thickened to match the lower parts.

Then I again allowed two shoots on each, taking great care not to accidentally snip them off when clipping: these were clipped back closely until they became the prongs.

The only piece of wire involved is a loop inside the head, holding the two "horn" branches a certain distance apart, as there was a tendency for them to flop apart when I first started shaping it.  I don't actually know if that wire is still there! 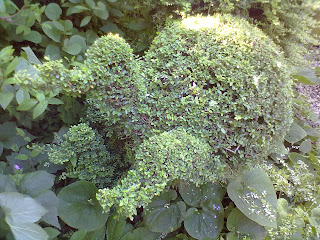 So here is the finished head, all neatly clipped and shapely again.

Just at the base of the right-hand horn (that's from her point of view, not ours) you can just see the lump that is the baby snail: it doesn't come out well in the photo, but in real life it's starting to take shape and is now just about recognisable as a snail.


Hence the change from Brian to Bryony.

I then gave the shell a once-over: firstly clipping with the shears to get the general shape back, then using the secateurs to do the detail of the curves.

I have to say, I'm still not thrilled with the shape of the shell, even though it is anatomically correct: I much preferred the spiral to run around the shell, leading to a point on top. It just looked nicer. 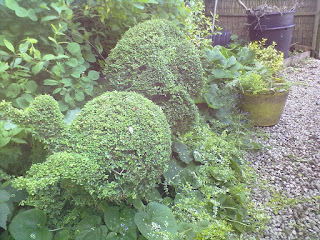 But here is the finished article, quite a difference from when I arrived.

It took about 20 minutes - I'm very quick with this one, as I have cut it many, many times. The horns are the only fiddly bit, and even they are really very straightforward.

I find that shapes like these are quicker to cut than formal shapes - possibly, as they are animal shapes rather than geometric shapes, you can be a bit looser with them.

On the other hand, they tend to be rather larger than formal Box balls and cones, so I guess it evens out overall.

If this one had been done in Box rather than in Lonicera nitida, it would only need doing twice a year, and wouldn't turn into a mad fluffy thing the minute I turn my back - but the fast growth of the nitida means that mistakes can be rectified easily, and changes can be made without spoiling the look of the thing for too long.

After clipping, I rake up as many of the bits as I can reasonably get to, and I usually apply some general fertiliser such as fish,blood & bone, or a mixed feed such as Growmore: clipping stimulates more growth, so it only seems fair to give it some food as compensation.  Also, by removing the freshest outside leaves, you are removing a large proportion of the best photosynthesizing materials, so the plant usually benefits from some help.

I don't like to leave the clippings just lying around at the base of the topiary: I know of people who do this, saying that the clippings rot down and return their goodness to the soil, and arguing that this is no different from putting the clippings on the compost heap, then putting the compost around the plant. However, they are missing the point about compost, which is that the green materials need to use nitrogen in order to break down, before they can release their own nitrogen back into the soil. So if you leave your clippings in place, they will steal nitrogen from the soil around the plant in order to rot, before eventually giving it back. (This is the simplified explanation, by the way.)

It is better to clear up the clippings and let them rot on the compost heap, where the brandling worms can eat them and help them decompose harmlessly. Then in due course, you can ladle the compost around the base of the topiary plants,  which has a nice sense of continuity to it, don't you think?
Posted by Rachel the Gardener at 09:28