They haven't had the best of years this year, but then we've had some very odd weather...

Anyway, it's time to prune them ready for the winter, for two reasons: firstly because the flowers are better on new wood than on old wood, and secondly to prevent damage over the winter.

Here is one that I prune every year - left to their own devices they grow in a rather bush-like shape, something like Spirea, but this one was planted rather too near the front of the bed, and the client won't let me widen the bed, so I have had to encourage the Caryopteris to form a woody framework which is going up and along, rather than out, with the new growth falling in pendant fashion from the framework.

It makes a very attractive shape, and is rather more interesting that yet another fluffy round ball.

Here it is "before" - a rather tangled mess, looking quite bedraggled as the flowers have all finished and dried off to brown fluff. Normally with anything grown as a pendant, such as willow-leaved pear, that miniature weeping willow Salix caprea 'Kilmarnock' and so on, the aim is for a "light airy waterfall".

More of a flourishing hydro-electric plant, in this case.

As you can see, it completely obliterates the front of the border: this fits in perfectly with the tall scented shrubs running along the back of the border, and through the summer it creates a wall of colour and scent. Lovely! 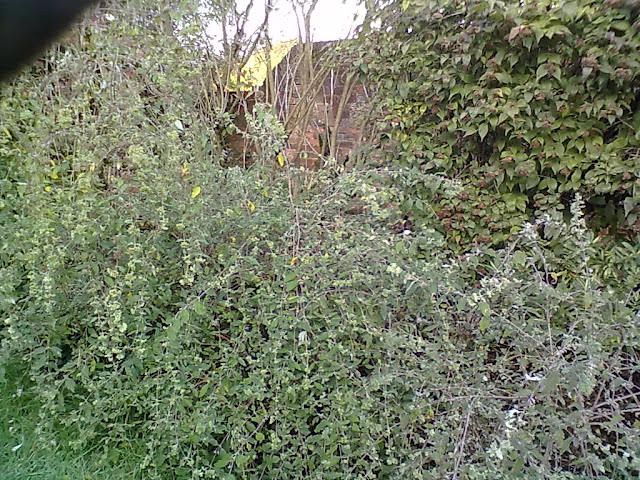 Right - on with the pruning.  It's a simple process: go over each branch, and cut back all the new growth to stubs on the old wood.

Rather like Wisteria, or Buddleia: you keep the old framework, unless it has split, or is growing in the wrong direction, or getting a bit top-heavy.  In this one's case, I always take off a few of the bigger branches that are coming forward over the grass, and I try to keep it looking fairly balanced.

Once all the long twigs are gone, we are left with a much neater and much woodier-looking shrub: 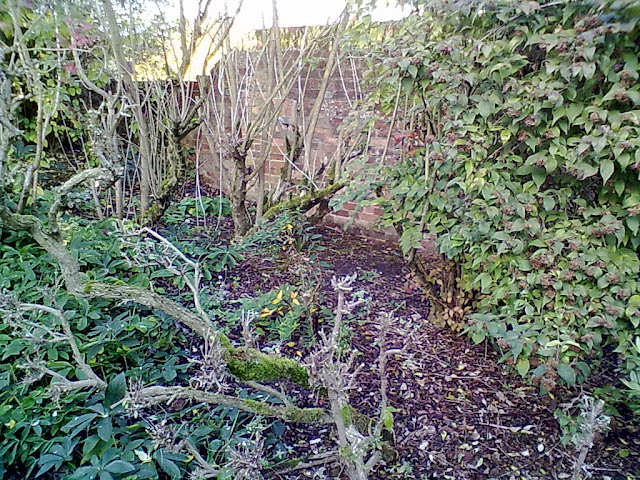 Suddenly we can see through it to the shape of the shrubs behind - you can now see the Abelia in all it's end-of-season fluffy seed-head glory. That one had a major chop two years ago, and this year only needed the over-long new growth removed, which I did about a month ago.

Further behind you can see where I brutally chopped the other shrubs two years ago, forcing them to produce strong thickets of upright stems from much lower down.

And of course you can now see the Hellebore thicket!

Here it is from slightly closer, so that you can see the stubs - very similar to the method used for encouraging fruiting spurs in Wisteria, or in vines, or for that matter in fruit trees. 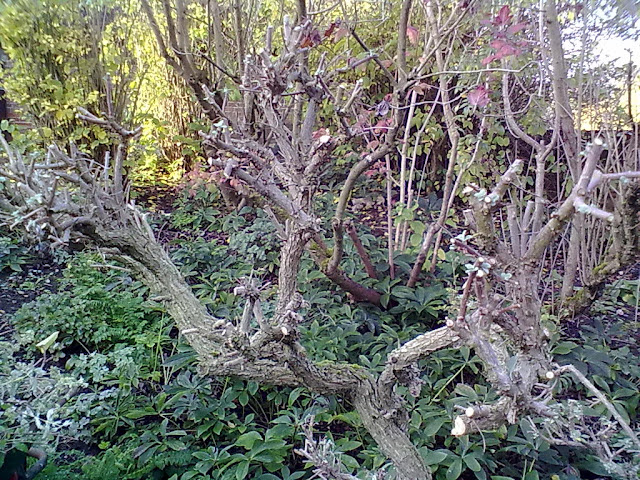 And once again, I have to say how impressed I am with professional plant photographers, as all of these photos do rather look like a mass of greenery..... but I hope you can make out enough detail to make sense.

I also have, in another garden, much smaller examples of this shrub, pruned in exactly the same way but only 45cms off the ground (she said, proudly and metrically - although I am thinking 18" of course) rather than 1.5 metres - I'll  try and remember to take a photo of them next week, to show you the comparison.

So off you go, get out there and prune!

Posted by Rachel the Gardener at 16:17