No, today it's Vines, but it's very much the same thing as for Wisteria: at this time of year, it's time to cut back all the new growth, right back to the basic framework of knobbly spurs.

And, once again, I forgot to take photos until I was half-way through the job, sorry!

With vines, my first step is always to cut and gently pull away all the entangled new growth of the season - at this point, I am concerned with getting the bulk of the unwanted growth out of the way, so I just cut roughly a good 20cms or 8" away from the main framework

So here is the "Before" of one end of a vine in my charge, at that stage: 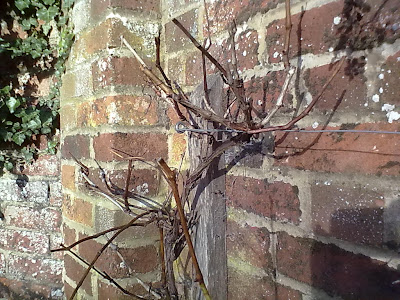 Often, due to the tendrils, it takes some careful snipping to release the unwanted growth, and I often have to snip out long growth in sections, particularly when it has sneaked around behind the supporting wires and has headed skywards, unseen behind the covering leaves.

As you can see, it's had all that work done, and is now reduced to the basic framework with untidy sprouts in all directions.

The next stage is to cut all of those right back to the framework, leaving maybe one or two buds on each one. Don't forget those sloping cuts, again! 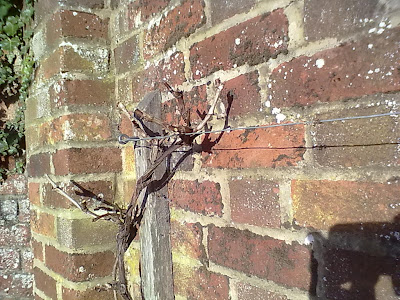 Once this is done - right - you should be left with some gnarled old branches, ending in knobbly lumpy bits.

This is correct pruning for a vine!

I know it looks drastic, but honestly, you really have to do this every year.

Normally, presented with what you can see in this photo, you would say that one stem of growth should have been allowed to remain, on the far right-hand of the upper framework.

The intention would be to train this stem along the wire to the right, allowing it to become part of the framework.

However, in this case, the client has brought in a new vine this year, which we are going to train up next year to take the place of this one, which has never performed well. The new vine is to the right of this one, and is going to move left along that wire, taking up the empty space next season.

I am hoping that by the end of the next season, I will be able to dig out this one altogether.

And yes, if it were my garden, I would have taken this one out altogether as soon as the new one was delivered, but I was instructed to leave it for one more year, "just in case".

Oh, one other job to do at this time: gently remove any loose bark from the main old framework.

I know it seems terribly harsh, you do think that the stems would benefit from the loose "skin" as frost protection, but - and you can look this up for yourselves on google if you don't believe me - the books all say that we should remove loose bark as it harbours pests, particularly scale insects, over the winter.

So, gently rub off any loose flaking bark, and rub off any scale insects that you should happen to see, as well.

"What's a Scale insect?" I hear you say.  Oh, have you not met these strange little things? They are kind of primitive-looking things:  basically sap-suckers with hard outer shells which they clamp down tightly against the bark, to prevent birds getting at them.  Like all sap-suckers, they rarely kill plants, but they weaken them, which reduces their vigour and makes them more prone to diseases, and other pests. For this reason, you should try to reduce their numbers if you can; and removing the dead bark and rubbing off any that you find is a good start.

What do they look like? Just google "scale insect" and click on "images". They are tiny, semi-hemispheres, brownish or orangish in colour, and it helps to imagine them as tiny barnacles, clamped onto the stems of vines and many other plants. How small is "tiny"? Oh, er, about a quarter the size of a fingernail, how's that for precision? (Hey, I'm a botanist, not an entomologist!) At this time of year they are quite dry, and often you can just sweep them off with a finger.

So there you go, quick guide to the Winter Tidy-Up for vines, hope you enjoyed it!
Posted by Rachel the Gardener at 15:39