As I haven't said anything much about Prairie Planting recently, I thought I'd better explain why: it's because all through Sept, Oct, Nov and Dec they don't require any work.

Well, barely any work, apart from raking through the Stipa tenuissima as they flower, to avoid soggy brown masses after any rain. Oh, and maybe a little bit of weeding.

But so far, I haven't even cut down the very dead Echinacea purpurea or coneflower. They are now matt black, still standing stiffly to attention, and actually looking rather lovely, if not particularly colourful. I have removed one or two stems that have collapsed sideways, only because they look so untidy, but otherwise I have left them standing.

Likewise the Cardoons or Cynara cardunculus, which are holding up wonderfully this year.  Last year the seed pods opened quite early, and they shed masses of fluffy seeds all over the garden. Luckily most of them failed to germinate, otherwise it would be standing room only for Cardoons! This year, however, the heads are intact, and they weren't as big as last year - a mere 5' tall (errr, not even 2m tall) whereas last year they were towering over my head.

So, here are my Prairie beds this week: a Picture in Shades of Beige? 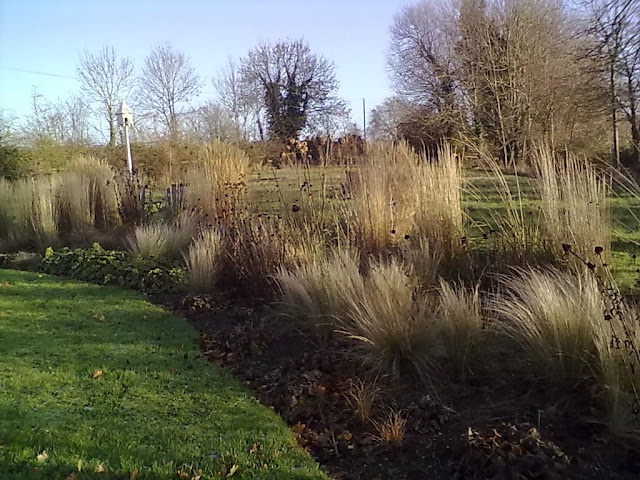 The other one looks better, with the sun behind me: 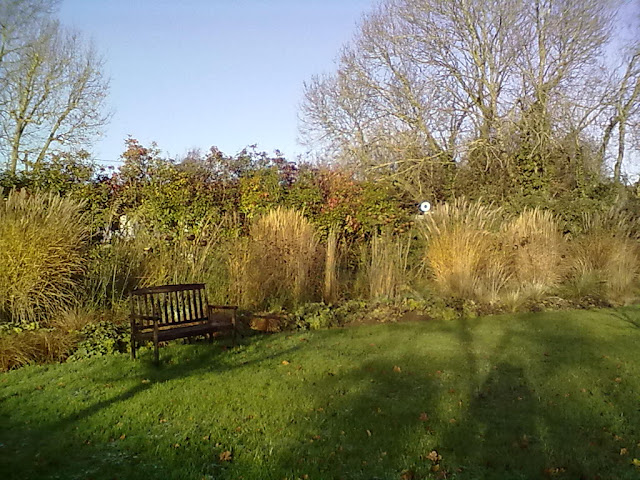 That's more like it, a Picture in Shades of Gold.  Glorious, aren't they? Not to everyone's taste, and it's not possible to achieve the look without a large garden, but they certainly are very low-maintenance at this time of year.

Now I have to wait and see how long I can leave them before I start the winter clear-out.

What does that mean, exactly? 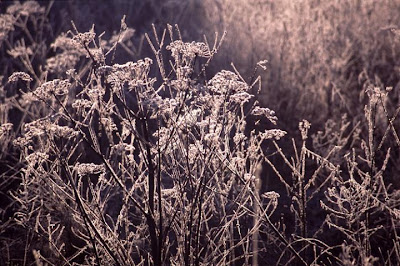 Well, I am sure you have all read in the books about "leaving your perennials to make a fabulous frost display".

This phrase is usually accompanied by a beautiful photo like this one (right) showing an atmospherically back-lit image of the perfection of crystallised foliage, shimmering in the winter sun.

And have you ever tried leaving your perennials unchopped in autumn?

In the UK, we are usually treated to howling winds and rain through November and December, leaving us with something more like this: 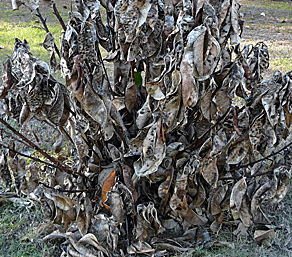 Yes, that's more familiar, isn't it? Ruined plants, blackened foliage, and as soon as the frost melts, it collapses into a soggy mess which then solidifies into an impenetrable crust, preventing the warm soft rains of Spring (er hem) penetrating the ground.

Or, more realistically, preventing the bulbs around the perennials from coming up cleanly, leaving each one with a lid of sodden black muck on it, spoiling the blooms.

And at the very least, making a safe haven for slugs and snails over the winter.

Oh dear, do I sound a bit negative about the frost effect? (said she, unrepentantly.)

Well, in a word, "yes",  I am very negative about the frost effect. I don't know which country contains the people who rhapsodise about it, but it can't be the UK.

Over here, we generally get rain before we get much in the way of frost, and that does rather tend to ruin the foliage, flatten the stalks, and destroy any symmetry of form.

Every year I am requested to leave plants unchopped "for the frost", and every year, a few weeks later, I am asked to clear up the horrible black soggy mess...

...but this year, so far, it has been surprising dry, and the wind has done surprisingly little damage, so for the time being I am leaving the Prairie beds as they are.
Posted by Rachel the Gardener at 17:44