At last! It's that time again - time to trim back the willows.

I have quite a lot of willow-work scattered around my gardens: I have lots of Fedges, plus the Willow Bridge which I think I've mentioned earlier.

Answer: it's a cross between a fence and a hedge, made of willow, which grows. There, now you know.

The principle is laughably simple: take plain willow "wands" or branches-with-no-side-shoots, push them into the ground, and weave them together decoratively.

The wands will put out roots and will grow: where they cross, they will gradually graft themselves together, and you get something nearly as sturdy as a fence, but which is green and leafy in the summer, and is bare but decorative in the winter. A sort of living trellis, really.

And then there is the Willow Bridge... no, that does not make it a Brillow.

Two years ago one of my clients asked me to install a fedge to separate their garage flat from the rest of the garden, to give some privacy to the tenant, and to screen off the newly-installed oil tank.

I suggested that if they were ordering willow for this, it would be a good idea to get enough to make an additional fedge to hide the extraordinarily ugly compost bins that they had just built for me. (I gave them detailed instructions! I gave them sketches! I gave them measurements! They asked their handyman to do it, and instead of a neat block of 3 x 1m square bins, I got 2 x 2m square monstrosities, easily 1.5m high,  grumble grumble grumble...) 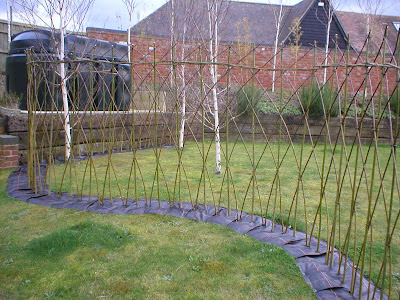 Well, they measured the area, sent off for the willow, it duly arrived, and I got to work.

Here is the Curvy Fedge, seen from the garage side.  It runs in front of the unlovely oil tank, leaving the small grove of silver birch on the "garden" side: it then snakes elegantly around to divide off the tenant's area.

You can see that I was asked to put down membrane at the base: this is not always needed, but grass does offer a lot of competition to willow, so it was either use the membrane, or spend the whole year weeding around the base of the wands.

This is of particular relevance in their first year, while they are getting established.

This Fedge clearly demonstrates the principle: insert an upright wand every - whoops! nearly said 18"! - 45cms to form the basis of the Fedge. Then go back and insert wands at 45 degree angles, and weave them alternately in front of, or behind, the uprights.  Tie them together at the joins. Add a long wand to the "top" of the Fedge to give stability - this is a non-living one, and will die - then, if required, add a decorative top. 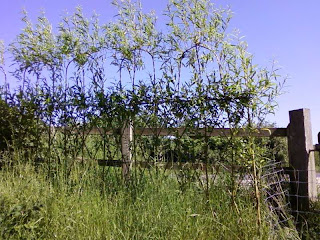 I did something similar for the compost bins, making the tops into decorative Cathedral-type arches.

There was plenty of willow left over, so I did another short length along the drive, (left) where it fronts onto the road: I thought it would be nice for visitors arriving to be greeted by something a bit unusual.

This client, by the way, runs a very nice boutique B&B, so the garden has to look good, and be safe, all year round. More of that in another post! Back to the willow. This was taken in May 2009, which is about four months after I installed it, and you can see that it put on quite good growth, even in the first year.

There was still yet more willow left over, even after doing another "screen" up by the house:  and I came in to work one morning to find that the clients had been out playing, over the weekend, and had taken all the leftover willow and had rammed them into the stream, tying the ends along the bridge. Well, why not? All it took was a little neatening, and the arranging of some of the wands into strong horizontal bands, to form the framework for future years. 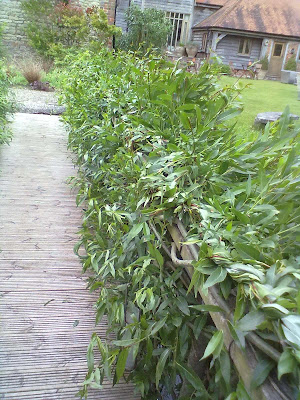 This became known as the Willow Bridge, for the obvious reason, and during the summer it looks like this:

I spend 20 minutes or so, every other week, weaving the new growth in so that visitors can still see over the sides.

You might remember that this year, we had late frosts? Well, the new growth was completely blackened and spoiled, to the point where there was nothing to do but cut off all the horrible black bits, and let it regrow. It didn't look too pretty for a couple of weeks, but then it picked up speed again, and you would have to look closely to see where the damage was.

I don't prune this at all: if I did, there would be twice as much new growth (apical dominance and all that) and visitors would never be able to see the stream! Instead, I plait it sideways, filling in the sides of the bridge as much as possible, and keeping the top as low as I can.

It gets a lot of compliments, which is nice.

And then, of course, once a year it has to have a proper haircut:  this is essential with decorative willow, otherwise it will lose it's form completely, and just become a huge willow tree. 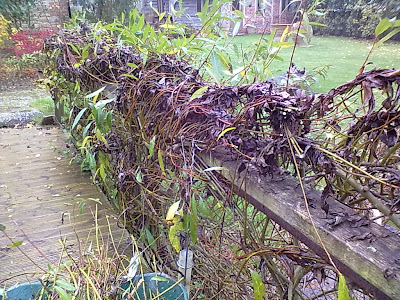 Here is the same side of the bridge as shown above, but today it is late January, the leaves are blackened and falling, and it's time for the big prune. I go along the handrail, cutting off all the current year's shoots, right back to the basic framework which I established the first year. 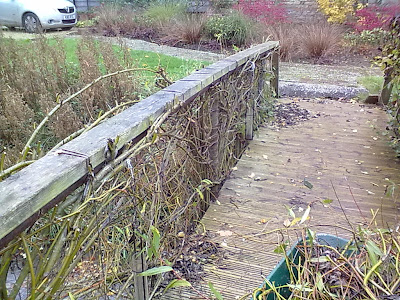 Seven wheel-barrow-loads later, the job is done, the bridge is bare again, and the visitors are asking "where is the Willow Bridge?"

Posted by Rachel the Gardener at 17:14