Well, at least, I hope that I did.

I'm sure you have read that our bees are in trouble - their numbers are declining, there is a specific virus that is reducing their numbers, we are removing their habitats, and so on.  So we are all being encouraged to Be Nice To Bees.

This involves planting bee-friendly plants, which of course I thoroughly embrace, and I have to say that one day, I am hoping to keep bees myself.

Two hours later, he was still there - clamped on for dear  life, but not actually moving.

Lines from Monty Python were running through my head: Eric the Half-a-Bee, to be exact. Anyone else remember that one? It went something like -Can a bee be said to be, or not to be, an entire bee: when half the bee is not a bee, due to some ancient injury. Singing! "Is this wretched demi-bee, half asleep upon my knee, some freak from a menagerie? No! It's Eric, the Half-a-Bee" etc.

So I collected a saucer, some warm water and some sugar from my obliging client, then added the bee: 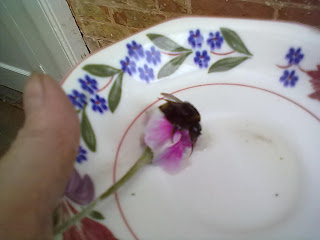 I left him in their warmish porch, having tipped the sugar water so it ran practically up his nose.

Half an hour later, I returned - success! There he was, with his proboscis zipping in and out, taking in the sugar water.

I have since found out that this is a reflex action - if a bee's antenna make contact with a sugar solution, the proboscis automatically starts working.

So I guess my bee was refuelling in his sleep? What a useful reflex, as I am sure the bee was too cold to have been able to feed of his own volition. What a good thing I unknowingly dunked him in the sugar water.

How long does it take a bee to refuel? Quite some time, I think: I left him in the saucer for an hour and three quarters, then when I was leaving, I transferred him to an open Scabious bloom, along with the rest of the sugar water, in the hope that he would continue to feed, and that being in the sun - which had obligingly come out by then - would warm him up sufficiently to be able to fly off, feed normally, and be safely tucked away somewhere before dark.

Did it work? I won't know for sure, unless I go back in a week's time and find a dead bee at the foot of the Scabious.. but at least I tried!

Posted by Rachel the Gardener at 11:14