Today we have a happy tale, of a rose that didn't quite die.

The rose in question is a very old one, which had in it's time been much loved by the client, but was now in a sad and sorry state, being mostly one gnarled stem, which grew vertically to above head height, and then produced a small tuft of spindly growth with just a few flowers.

Last year, with permission, I gave it a massive chop, removing all the pathetic top-growth, cutting it back to the one bare stem. Taking the chance for a bit of plant-torturing, I then carefully bent the main stem over to the left, close to the base, and tied it in to the wall.  Finally, I cut the stem neatly,  leaving just what looked like the most promising shoot.

It did well, producing a good strong shoot from the highest point, pretty much as you would expect: and that shoot grew well, thickened up, branched, budded, and actually produced flowers. 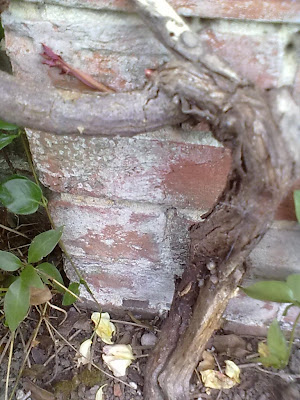 ...much to my joy, this tiny little shoot appeared - can you see it? Right at the top of the picture, heading off on the diagonal,  it's the same colour as the red bricks, and is about 3" long at this point.

Each week I would check it,  hardly daring to look in case it had been damaged by wind, client or cats.. but it survived! 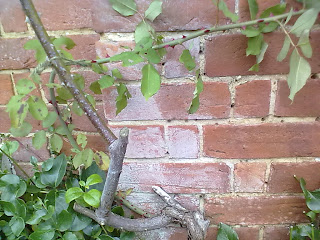 And here it is at the end of the season, you can see the strong new shoot rising out of the top of the picture, in brown,  and my little shoot is that lovely fresh green one.

And yes, you are quite right, I have already started the torturing process by tying it in to the wall and forcing it to go horizontally.

As I never tire of explaining to people, climbing plants all have their basis in a jungle environment, and they all think that their mission in life is to grow and grow until they get to the top of the canopy, where there is sunlight and freedom. At that point, they lay down on the canopy and relax, and only then will they burst into flower.

So if you want a lot of low-down flowering from your climbers, you need to prevent them from making a bid for the sky: instead you have to gently persuade them to go left-and-right instead.

Much of my work with roses involves torturing gently persuading them into more horizontal growth, in order to get them covered with blooms at the right height for appreciation by us normal-sized people.

Fan-training is always nice, if you have a rose against a wall: for pergolas or upright supports, wind the new growth round the support, rather than letting it gallop straight up. Then at the end of the season, cut the new growth off, back to your basic shapes, and allow those to become your framework. After the second year, maintenance gets suddenly much easier!

So that new little shoot is going to be allowed to go right, and then it is going to be eased back to the left, and in time this will become part of the "framework" wood of this rose.  Other new shoots will be treated in the same manner, and in a year or two the wall should be well covered, with blooms at just the right height.

Did you enjoy this article? Did you find it useful? Would you like me to answer your own, personal, gardening question? Become a Patron - just click here - and support me! Or use the Donate button for a one-off donation. If just 10% of my visitors gave me a pound a month, I'd be able to spend a lot more time answering all the questions!!
Posted by Rachel the Gardener at 13:06