Roses and Grafting - what, why, and where

Recently, I wrote about suckering Roses, and how to spot the suckers: and a few people asked for more information about the whole grafting business: all the books tell us that our Roses are prone to suckering, and that we must be constantly on the alert, to remove these suckers as soon as they appear, which is correct as far as it goes.

First we need to understand why some Roses send out suckers. This is all to do with greed, and grafting.

Grafting is the process whereby a "beautiful" Rose... 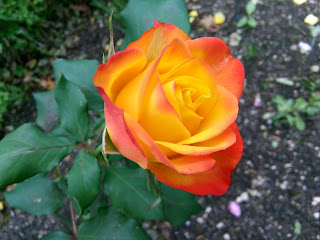 ... is joined on to a "rather less beautiful but very sturdy and healthy and fast-growing" rootstock. Thus, the "beautiful" Rose grows quickly, and healthily, because it is being funded, as it were, by the sturdy rootstock.

Why don't they just grow on their own roots, you ask?

Ah, this is where the Greed comes in: the "beautiful" Roses, which have been bred to have huge flowers, to flower repeatedly, to be of unusual colours, etc,  are usually not as strong, not as healthy, and nowhere near as fast to grow as the less beautiful, basic roses.

Rootstocks are usually something like Dog Rose - Rosa canina. Yes, that stuff that grows in hedgerows, all over the place: cheap, easy to obtain, fast-growing, sturdy.

And the "greed" part is because the grower can take one specially bred, beautiful, rose plant, and cut out a dozen or more sections to graft onto easily-grown Dog Rose rootstocks, and can produce a dozen or more saleable plants in a year or so: whereas if they just took normal cuttings of the beautiful plant, they might take 5 years or more to grow to a saleable size - and there would be a very real chance of losing some or all of them in the meantime.

Perhaps "greed" is a bit cruel, actually: I've made it sound as though it's the grower who is greedy, but  maybe it's more a case of the buyers, ie us, not wanting to pay a lot of money for a smallish, rather delicate plant, because we don't care that it might have taken five years of careful nurturing, to produce. We would rather pay a few quid for a bonny, boisterous-looking plant which will grow like a mad thing, and flower all summer long. So we have only ourselves to blame.

So, grafted roses, then.

Next question - "the books say to look out for growth from below the graft - what does that mean?"

Roses grow: we can see them putting out new shoots, and we can see those shoots getting longer and stronger, and bearing lovely flowers. But the rootstock also wants to grow, and although it has been selected and trained to give all its energy to the "beautiful" rose above it, sometimes they rebel, and start to put out shoots of their own. If the owner doesn't notice them, these shoots will quickly outgrow the "beautiful" rose, because they are - by definition - stronger and more vigorous than the upper part. That's why we have to look out for them and remove them as soon as we see them.

As per the other post, here is an example of a below-the-graft sucker: 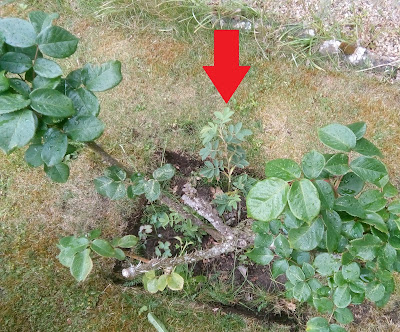 ...with the sucker helpfully pointed out for you.

And this leads on to the next question: "Where, exactly, is the graft? "

On this particular plant, the graft is at ground level.

All shrubby roses which have been grafted, will have the graft at ground level, so that everything we see is going to be the "beautiful" rose.

The other position for grafted roses is when they have been tortured grown as what is called a "standard" rose.

This is where the rootstock is allowed to grow just one branch, strongly upright: then, when it has reached the desired height, the "beautiful" rose is grafted on at the top. 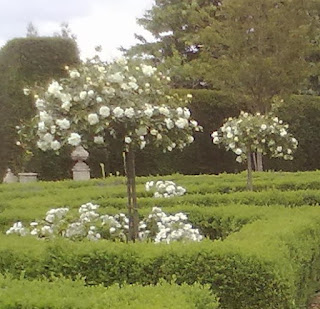 Here - right - are a couple of standards: these are "big" ones, the graft is at eye level.

More often, they are at waist level, as it takes a long time to grow and graft something this big, so they tend to cost a lot of money!

They also need to be very firmly staked, and very firmly and safely tied to their stakes, otherwise you come to work one morning, and find this: 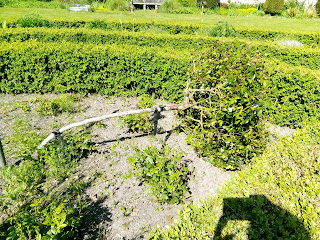 The ties had broken, the entire rose had flopped over to the ground, and the garden owner had done nothing about it!!

Luckily, in this case, the stem had not actually broken, and I was able to carefully lift it back to upright, and install some proper tree ties to keep it in that position: it survived the experience and went on to live a happy and healthy life.

But it was one of those moments where my heart sank, as it was part - as you can guess from the photo - of a very formal Knot garden, and it was one of four matching roses. Losing one would have made a bit of a hole in the design...

Right, next question: "Are all roses grafted?"

No, certainly not. I used to work for a delightful elderly gentleman who had a garden full of roses, and not one single one was grafted. They were all grown on their own rootstocks, as it were: many of them were cuttings he had taken himself.

So why are so many roses grafted? As mentioned above, it's our desire to have a big, healthy plant at the least possible cost, I'm afraid.

But as long as we keep an eye on them, and remove any below-the-graft suckers as soon as we see them, all will be well!