Like many people, I love winter-flowering jasmine, whose proper name is Jasminum nudiflorum, which, incidentally, is one of those botanical names which really makes sense - the flowers (“flora” or “florum”) appear on bare, leafless (nude!) winter branches. So nude-ee-florum certainly describes what it does.

It's those clear, bright yellow flowers that I like: they really brighten up a dull winter's day!

For summer - which also has its share of dull days, I have to say - I grow Jasminum fruticans, which is a massively under-rated shrub, rarely seen for sale, yet very easy to grow, tough as old boots, pretty much maintenance-free, and delightful all year round.

It's semi-evergreen, which means that in all but the coldest winters it will keep the leaves, which are an attractive dark, glossy green and are interesting in themselves as they are tri-foliate, which means. as the name suggests, that each leaf, or piece of “foliage”, as it were, has three lobes. The flowers, which are very similar to those of Winter Jasmine, appear en masse in late spring, then again intermittently all through the summer.

It's a fully hardy shrub, and - like winter jasmine - it is not actually a climber: left to its own devices it will form a rounded shrub of about 4' tall, but it's very easy to take a couple of the rather lax branches (Parent Jasminum fruticans to baby Jasminum fruticans: “Darling, your branches are so LAX! Do hold them up straight!”) and tie them up to a trellis or fence, thus allowing new growth to form a cascade, and bringing the flowers up to eye height where we can see them more easily. 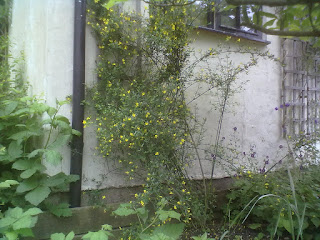 Here's an example from one of "my gardens",  where I tied it in to an existing trellis, in an awkward narrow bed right up against a wall: and it's already at breast-height

This photo was taken in May, and you can see that it's flowering nicely.

Best of all, unlike winter jasmine, it doesn't sprout kraken-like tentacles which root wherever they touch the ground, so you won't have a problem with it taking over or getting out of control. It rarely needs any cutting back, maybe just a little trim in late summer to reduce some of the bulk: but generally speaking, it is easy to grow, and drought-tolerant once it is well established.

So if you like the idea of having bright yellow, scented, Jasmine flowers in summer as well as in winter, look no further than Jasminum fruticans.