Gardening in a heatwave

I wrote recently about watering during an extended hot spell, and while working today I was pondering on what other things we can do to help our gardens: some of us are having what the met office call “light showers” this afternoon, but it's barely enough to wet the paths properly, so it's not going to do the gardens much good.

So what can we do?

It's more a case of what can we NOT do: normally at this time of year I am cutting back things like Alchemilla mollis, whose flowers are changing to brown as they go to seed, and the leaves are starting to look very drab and tired. 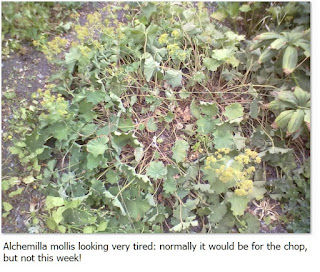 My usual technique is to cut them right back to the bone, leaving virtually no leaves at all, unless they are very small, new ones. Then, in normal times, within a week or two a flush of new leaves appear, and within another week or two we have a perfect dome of fresh new foliage, and they often have a second flush of flowers later on, as well.

But this year, with the hot dry weather due to continue for days yet, it's wiser to put off any cutting back: the current leaves may well be tired and rather brown, but they are offering some shade to the roots below, so leave them in place for now.

Also, with not much rain likely, they won't immediately sprout new leaves, so we'd be looking at a bare, brown mound for longer than necessary.

This goes for most of the hardy Geranium (Geraniums? Gerania?) as well: I'm just leaving them for another week or two.

Likewise, perennial Poppy, going brown now, and normally all set to be cut back to nothing: this year, I'm leaving them in place to protect the heart of the plant.

And as for weeds: well, to be honest with you, as long as they are not actually flowering, I'm tending to leave them in place: not only do they provide shade, but as the soil is now so hard, it takes a lot of effort to dig them out. Ah, truly is it said, “weed when wet, dig when dry,” although I wouldn't really fancy digging at the moment!

In particular, I'm leaving any wild Strawberry that I find: normally I ruthlessly remove them, but now they are providing some welcome greenery and again, providing a bit of shade for the soil, so they can live on for another week or two.

All the plants I would normally dead-head really hard, or cut right back - such as Penstemon, Campanula, Scabious, and Astrantia: all these plants are just having the tips of their flowering stalks dead-headed, taking off anything which is really brown, and leaving the rest to act as sunshades for the base of the plant.

As for other garden jobs: well, obviously, don't lay any turf this week or next: wait until we've had several days of rain to get the soil good and wet again, before attempting turfing.

For that matter, if you don't really need to move plants around, then don't do it: hold off on the post-flowering lift-and-split until such time as we have some water back in the soil.

I've been making lists of jobs to do “when the rains return”: and in the meantime I am dead-heading roses in the usual way, cutting back seeded stalks of Aquilegia (but not cutting all the foliage back hard, as I usually do) and Delphinium, and leaving the rest for another day!