There's nothing to do in winter, you say?

People who don't have gardens often say that: "what do you DO with yourself in winter?" they ask, "when there's nothing to be done in the garden?"

Ah, how little they know.

Among the long list of jobs which it IS possible - and often necessary - to do in winter, is the pruning of evergreen shrubs, which don't particularly mind being pruned in winter, and which we didn't get around to doing back in the summer... 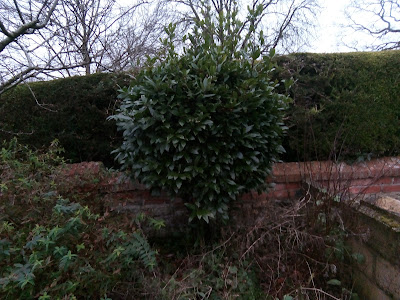 Here's a nice little job, for a cold winter's day: my Client asked me to tidy up this Bay multi-stemmed shrub, because she didn't want it getting any taller.

As you can see, it's throwing up long shoots at  the top, and what you probably can't see is that it's also putting up a lot of suckers from ground level, which are cluttering up the stems

There are also a few weeds and things around the base of it: this bed has apparently been a little bit neglected this year, so it needs a bit of tidying.

First job, then, is to do the weeding: otherwise I'll be standing on them in order to do the Bay, which will make it harder to weed them out afterwards.

They turned out to include some quite well-established nettles which required a bit of digging to extract: and I spotted quite a bit of bindweed towards the back of the bed, but I decided I'd come back to that on another day - I didn't want to dig too much, otherwise I'd get very muddy, plus it would "fluff up" the soil nicely, only to have it trampled down and compressed by me walking around the Bay.

Once the weeds were done, I found that the shrub to the left - 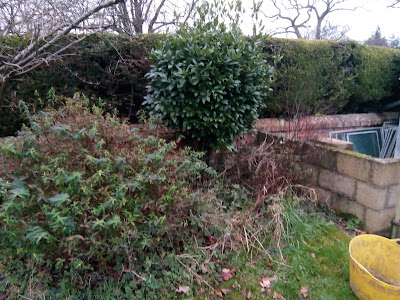 - a bulky and insignificant Hypericum (St John's Wort) - was getting in my way, and as it had no berries on it at all (highly unusual!) I gave it a quick all-round haircut.

I didn't bother with the usual one-in-three, because I could see - when I looked inside the bush - that it wasn't particularly congested inside, plus I could see where it had been cut the previous year, so I just trimmed it back lightly, and cut out some of the dead stems towards the centre.

This allowed me to get to the Bay, at last.

Simple enough, just go round it step by step, leaning in and up, taking each long stem in turn, and cutting them off with secateurs, but don't leave a stub sticking out: push the secateurs down well inside the "outline" of the top section.

Once they were dealt with, I went down on hands and knees, and cut out all the root suckers and shoots which were springing up from ground level. There were plenty of them, some as high as my waist!

In a perfect world, "one" would spot these new ground level shoots when they were still buds, and rub them off: this prevents them from growing. Having to cut the rather stout shoots off at ground level is "pruning", which means that the cut ends will sprout again in spring, so I will have to keep an eye on this shrub.

Next job,  I checked inside the top section, and found a patch of dead leaves, so I tracked those stems back and cut out the dead sections altogether.

This, predictably, left a hole or void, so I pulled some of the other branches in, to fill the gap, and trimmed them as necessary.

Nearly done: now it's time to stand back, and check the overall shape from all sides. Sure enough, I'd missed one of the top sprouts (every time!) so out that came, and then I felt that a couple of the lowest branches could do with a trim. 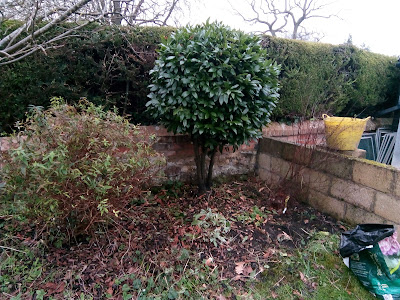 And there you go, all done.

You will note that the top of the Bay is not laser-clipped to an artificial smoothness: with large-leaved shrubs such as Bay, I much prefer the "natural" shaping, where individual leaves are not clipped with shears - partly because those clipped leaves then go brown where they were cut, which I think is really ugly.

And partly because I think it looks more natural, this way.

Next time, I'll go along the front of the bed and tidy up the newly-revealed grass edge, which has deteriorated considerably, as you can see.

But for today, that was enough, and the Client was happy!