How to: recognise Broom, Gorse and Whin 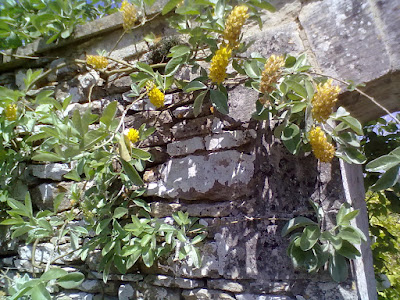 “Broom isn't a climber, surely? It grows on heaths, doesn't it?”

Yes it does - but in certain circumstances, and with certain species, it can also grow on walls!

The photo shows Pineapple Broom, proper name Cytisus battandieri (a name which always makes me think of Flamenco for some reason... or cake), which makes a good wall-trained shrub but needs to be in a sheltered area, as it is not fully hardy.

Isn't it lovely? I could see her confusion, though: a lot of people aren't sure about the difference between Broom and Gorse anyway, and she asked me to explain it to her.

Never one to miss an opportunity to discuss botany, I explained that when discussing Broom, we always have to start with the question:

All three are more-or-less evergreen shrubs, bearing yellow, pea-like flowers which explode when insects alight on them, thus pinging the pollen all over the hapless insect. They all grow in the wild (except for the above-mentioned tender Pineapple Broom) on disturbed soil, often at roadsides, on scrubby, dry heaths and on rough grasslands. So how do we tell the difference? 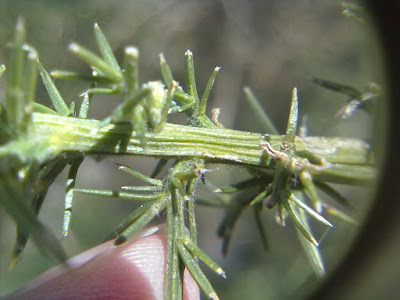 Let's start in reverse order, with Gorse, whose proper name is Ulex.

This is a bit close to Ilex, which is Holly.... and both of them are prickly!

Ulex - Gorse  - have no "normal" flat leaves at all, other than on very young plants: mature plants are covered in branching green spines, which provide photosynthesis and protection all in one.

You can see in this photo, which is a close-up, that there is nothing but spiny pointed things.

And you can see (hopefully!) that some of the spines have more spines upon them, and this is what is meant by "branching spines".

Next: Whin. "Whin" is one of those common names which is often used for all three of these plants. However, properly speaking, Whin means Genista. 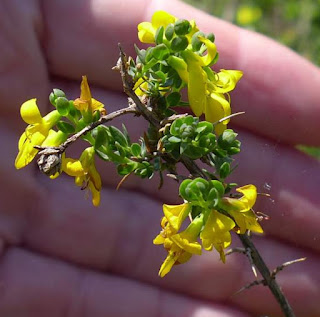 This photo - right - shows Genista anglica, or Petty Whin, which is the one you are most likely to find while out and about. The "petty" part refers to its size - as you can see, it's quite a small plant.

Genista have green leaves which are oval or oblong, along with a few simple (unbranched) spines.

The leaves are sessile, which means stalk-less: they are attached directly to the stems, one by one.

They have some spines - not that many, just enough to make them unpleasant to pick, and painful if you sit on them.

The spines of Genista are brown, not green - and sometimes the spines have leaves growing on them.

Now we get to Broom: 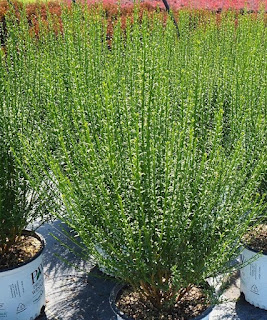 Broom's proper name is Cytisus, and they are completely free of spines.

They grow as rather erect shrubs, with long green five-angled stems, on which the foliage is usually quite sparse, so you get an effect of green, but leafless, branches.

If you screw your eyes up a bit, you can just about imagine cutting a big handful of it, and using it to sweep the floor - at least, I assume that's why the common name is broom! 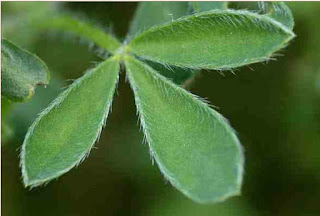 The leaves, when they do appear, are stalked, and are what is called tri-foliate leaves - that means each leaf has usually three leaflets, rather like Clover - and they generally appear on younger stems.

Older stems tend to be bare of leaves.

Like everything to do with botany and gardening, the confusion arises because we all use the common names, and we often use them wrongly. For example, the names gorse, furze and whin are all used interchangeably to mean gorse - which is Ulex. But officially, whin is Genista: it's a different genus, it has leaves, and few spines. And in Scotland, “broom” is Ulex (gorse - or whin, or furze) whereas actually Broom is Cytisus, which has very different leaves and no spines at all!

Still confused? It gets easier: Genista (Whin) likes limestone grasslands, which are alkaline in nature: whereas Gorse (Ulex) prefers acidic soil, such as heathlands. So, if you know what sort of underlying soil you have, you can make a guess as to whether you are looking at Gorse or Whin. And if has tri-foliate leaves, it's neither!

They all have very similar flowers, but flower at slightly different times. Both Broom (Cytisus) and Whin (Genista) flower in the early summer, from May to June. The two less common types of Gorse - Dwarf Gorse, Ulex minor and Western Gorse, Ulex gallii - flower later in the summer, from July to September. But common Gorse, Ulex europaeus, flowers pretty much all year round, if it's fairly mild.

Which lead to a popular folk saying: ‘When gorse is out of blossom, kissing’s out of fashion’. It’s a knowing wink to the fact that, in milder areas, common gorse can flower all year round - so kissing never goes out of fashion.

To summarise, then: Gorse (Ulex) have complicated green spines, but no leaves. Whin (Genista) have simple brown spines, and leaves. Broom (Cytisus) have leaves, but no spines. There you go! Simple!

And finally, a quick word about Broom in popular culture: back in the 1800s, the Victorians were accustomed to using flowers to send secret, coded messages during a time when young ladies were not allowed to fraternise with young men (ah, how times have changed!), and liaisons had to be arranged discretely and modestly. Sending a Broom flower represented Humility and Neatness: presumably at that time, those were desirable qualities. Not so much, these days!

Did you enjoy this article? Did you find it useful? Did it make you laugh? No? Really? Not even at the kissing part? Oh well... *shakes head*  Back to the plot - Would you like me to answer your own, personal, gardening question? Become a Patron - just click here - and support me! Or use the Donate button for a one-off donation. If just 10% of my visitors gave me a pound a month, I'd be able to spend a lot more time answering all the questions!!