Box Rust - not Blight! - How To Spot The Difference

We've all heard about Box Blight, which is ravaging across the land, ruining decorative clipped Box hedges left, right and centre: 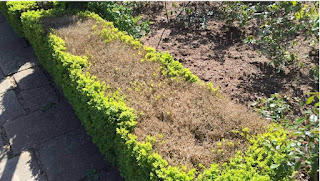 This is a fairly typical example of a really bad infestation - left - which is going to result in the death of this stretch of hedge, and probably of most of the other Box hedging in the vicinity.

As you can see, it's horrible: the foliage dies off completely, leaving swathes of dead twigs. There's not a lot you can do, once it gets to this point, other than rip the whole lot out of the ground, and start again, preferably with something else.  (Because if you have Blight in the garden, then any new Box plants which you install will probably fall to the disease as well.)

But it's worth mentioning that there are more diseases than just Blight, and not all of them are as bad.

Last year I was asked to look at a sickly hedge, whose owner had assumed was being ruined by Blight - she was panicking about having to rip out the wavy hedge that has taken years to clip to shape, just exactly how she wanted it.

The leaves were going brown and blotchy, and she was convinced that the whole lot would have to go.

Rather than reaching for the axe, we took a very close look at the damage. 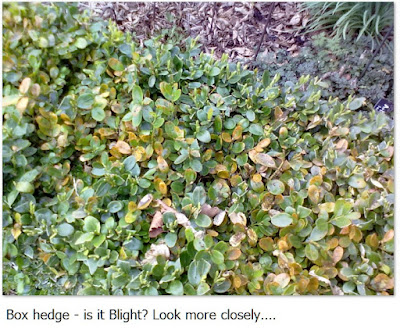 At first sight, it did not look good.

As you can see, left, the hedge has a lot of light brown foliage, instead of being green all over. 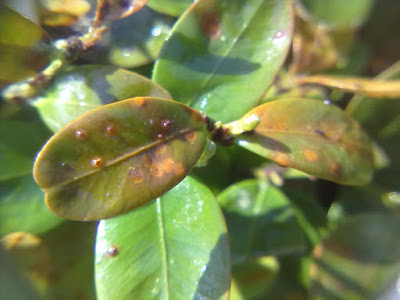 ... and a closer look shows the leaves to have round straw-coloured areas, which appear to be gradually spreading across the leaves.

Turning to the underside of the leaves... 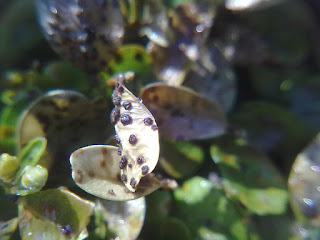 The underside of the leaves had lots of raised black pustules (“lovely!”) as well.

However, now for the good news:

This is not Blight - this is Box Rust.

It is superficially similar to Box Blight, but very treatable: we sprayed the hedge with Bayer Fungus Fighter (there are other products out there, I'm not being paid by Bayer, honest!) and left the hedge for a month or so: I then clipped it as normal, taking great care to shake all the loose clippings - which were, of course, mostly the affected foliage - out of the plant, and to clean up the debris really well afterwards.

The owner had one of those garden vacuum things, so we used that to do a really good job: and of course we didn't put any of the debris onto our compost - no, it all went onto the bonfire heap.

The hedge recovered and now looks superb - so if you find areas of brown foliage on your Box, don't panic too quickly: get a hand-lens or a magnifying glass and take a close look at the leaves, particularly on the undersides.