Pampas Grass: How to Set Fire to One (with or without being a Swinger!)

Proper name:  Cortaderia selloana.
Urban Myth: planted in front gardens, in the 70s, by "swingers", a term which meant couples who like to meet other couples, often several at a time, for elegant evenings of Blue Nun, accompanied by cubes of cheese, tiny silverskin onions and chunks of pineapple on cocktail sticks, pushed into a foil-covered potato. At the end of the evening, car keys would be dropped into a bowl and each lady would pick out a set of keys, then do the wild thing with their owner. Allegedly.
Impact on plant sales in the 2000s: people stopped buying Pampas Grass, because all their friends and neighbours would tease them about being "swingers".
Impact on house sales in the 2000s: anyone trying to sell their house would rip out the Pampas Grass before even contacting the estate agent.
Was it true? Probably not. I've known a few swingers, in my time (don't ask), and they have all said nope, not true.

So, in a nutshell, this is a plant which fell into disfavour. It also has become an invasive, banned, plant in some countries, where it spreads uncontrollably. Not so, in the UK, though, because our climate doesn't allow it to take over. However, it can grow into large clumps, and it does need a firm hand.

In recent years, it's become popular again, mostly with flower arrangers and interior decorators, because the flowers, the plumes,  can last for months, and are large and dramatic.

As a gardener, this means having to maintain the wretched things.

As per my earlier article on this plant, they are a bugger horrible to work around, because the leaves are wickedly sharp, and draw blood at the first contact with human skin. In fact, the name Cortaderia comes from the Spanish word ‘cortadera’, meaning (depending on who you ask) 'something which cuts' or 'sword' or  'cutter'. Whatever the exact etymology (I always have to check that word, in case I'm accidentally talking about beetles), the leaves are hellishly sharp.

However, there is one easy way to deal with them, if space allows: you can burn them. Yes, you can set fire to them. Yes, I have done it. (Yes, it is quite scary - they go up in flames as though soaked in rocket fuel!)

So, How To Safely Set Fire To Your Pampas Grass.

First, look around - is there room to have a bonfire on the exact spot? If not, don't set fire to it. If, however, there is nothing but grass nearby:  nothing overhanging, no overhead cables, then give it go.

Before getting the matches out, rake out as much of the dead material as you can, including those plumes: set them to one side, to be put on the flames once it's burning. Why not just set light to the whole thing, as it stands? Because 'control' is good, and if your clump is full of old, dead material, it will burn surprisingly fiercely. You can also chop off some of the top growth, if you are even a little bit nervous about doing this: again, they can be thrown back on, once it's burning nicely, if you wish.

Next, lay out the hosepipe and connect it to the tap, and turn it on. A ha'porth of prevention is worth a pound of cure, as my dear old Nan used to say: far better to have the hose ready for use and not need it, than to set fire to the hedge, the shed, next door's house, etc.

Now, have a good old prod around inside the clump with a broomhandle or something similar, just in case there are any dear little hedgehogs, or a family of small rodents, living in it. Give them a chance to scoot out, before you incinerate them.

Then, you can set fire to the thing. In most cases, I have taken a small handful of the flower heads, made them into a bundle, set fire to it, then pushed this into the middle of the clump. Then stood well back.

Here's one I did one year: this was done in late March, and this is what it looked like after the fire had burned out: 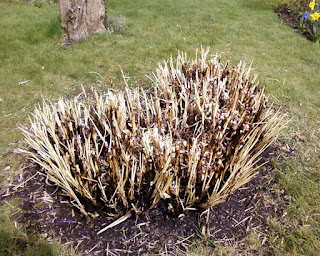 Actually, this was a week or three later, once the scorched grass had recovered.

Once it had reached this stage, I raked it thoroughly, with a soil rake, and most of those brown stalks came right off. 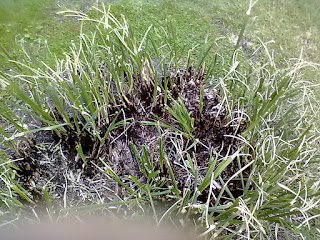 Here - right - is the same clump (from a different angle) in late May.

You can see that it is re-shooting beautifully, and you can also see the total lack of debris and rubbish: this means that the new shoots grow up clean, and with good air circulation. 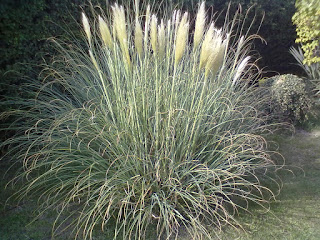 And here - left - is the same clump in September: you would never know, would you?

This does not need to be done every year, but it's a good thing to do once every, say, three or four years, because it gets rid of all the debris, all the clutter, all the dead stems, and it kills off every pest and disease in sight.

So there you go: the thing about the "swingers" might not be true, but the idea that you can set fire to them once every few years, is perfectly correct.