Replacing a lawn: do you really need to dig it up?

I received an interesting question the other day, from a reader who wanted to replace the smallish front lawn on his relatively new build property.

He said that cars were over-running the edge of his lawn, and compacting it: and he had doubts about the quality of the soil underneath it. So he wanted some advice on how to restore the soil structure, before attempting to relay the lawn, and whether it was a good idea to create a bed at the edge of the lawn, with planting to keep the cars off.

Now, this is a problem in two halves: the easy (but hard work) half is to stop the cars trespassing, and that is, as he had already spotted, easily sorted by making a new bed adjoining the drive, and planting some nice bushy shrubs.

The hard work comes in, because he will need to dig out the area for the bed, and he already knows that it's badly compacted. He is also likely to find that there is a quantity of builder rubble just under the surface, which will need to be removed: and he will also find that the edge of the driveway should project into and under his lawn area, because that's how they are made: they don't go straight down into the ground, the foundations of paths, drives, roadways etc always extend sideways.

So after digging out all the horrible compacted soil, and removing any rubble, the new bed area will probably need the addition of some 'organic matter' which is the polite name for 'farmyard manure'. Don't use what is called 'compost' or 'multi-purpose compost' because it doesn't have the 'body' of proper organic matter: it is lightweight, does not hold water well, and is pretty much sterile. Organic matter is closer to home-made compost: it's thick, solid, holds water well, and provides a good soil structure: whereas multi-purpose compost has no structure at all.

The order of events is something like this: remove the old turf. If it's badly compressed, full of weeds, worn out, or horribly yellow-looking, don't bother keeping it. Dig out any rubble, and fork over what's left. Tip on sufficient organic matter to bring the soil level up, to about 2" higher than the drive. Fork it over - that means, use a garden fork to stab and stir, to mix the new organic matter with the original soil underneath. Leave to settle for a week or so, then fork it over lightly again, and plant your shrubs.

Why do I say leave it to settle?

Because if you don't, it will settle after you've carefully planted, and then your shrubs will end up like this: 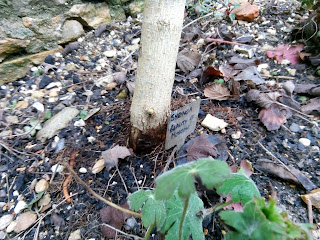 ...with their roots visible above the surface.

You can see the circular shape of the original plastic pot!  Aaargh!

If this happens, just get some more organic matter, and tip another layer on top, forking lightly to unite the two layers, until the plants' roots are safely covered again.

Anyway, getting back to our small front garden: 'one' will find it impossible to plant the shrubs right on the very edge of the bed, because of those pesky foundations for the drive: but that's ok, because they will quickly spread, and the visual barrier should be enough to deter the cars - people might not care much about their tyres, but they usually care quite a lot about their bodywork!

Right, now we turn to the question of the lawn area - or, that part of it which is to remain lawn.

That also needs to be lifted, soil enriched, allowed to settle, and relaid with new turf, right?

Here are some interesting facts about turf in general, and soil structure in particular...

1) grass does not need much depth of soil: 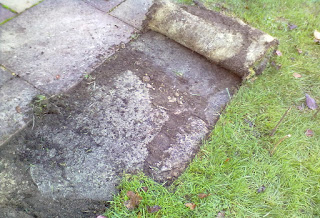 ... this - left -  was an area of apparently perfectly healthy lawn, been there for years, but turned out to have a patio underneath it.

You can see how I've rolled back the turf like a, well, like a roll of turf!

The grass was happily growing, and had been for many years, with about an inch (3cm) of root-filled soil.

In this case, the garden had been split when the previous owner built themselves a new house (some 20 years ago) in the very large garden, and sold off the old house - with the smaller 'half' of the garden.

They clearly just laid turf over most of the garden: I found proper stone patios, nasty 70s crazy paving patios, brick paths, stone slab paths: all sorts of hard landscaping just an inch or so under the grass, criss-crossing the garden. And I'd been working there about four years before doing this, and had never noticed, not even in the hottest summer, than the grass was anything other than normal grass, on normal soil.

In fact, I only discovered it because when I was digging in one of the borders, and I went to stab my fork into the lawn, beside me, as I normally do: I don't lay tools down on the grass because a) someone might trip over them, b) wooden handles don't enjoy lying on wet grass, and c) then I'd have to bend double to pick them up, every time. So I just push them into the lawn beside where I'm working.

In this garden, I did that in one particular place and the fork went "Clang!" which lead me to investigate, and then I found these numerous areas where the fork wouldn't go in more than an inch.

End of digression, please drive on.

Where were we? Oh yes, turf.

If it's already level, and more or less at the right height, and doesn't suffer from waterlogging every time it rains, then you can spray off the grass (using something like glyphosate) and wait until it's bare: or you can cut it really, really short - scalp it - then do some energetic scarifying/scratching with a soil rake, to fluff up the soil between the blades of grass, then plonk the new turf down on top. This has the advantage of avoiding the 'soil sinking' problem.

This works well if the old grass has a lot of superficial weeds, or moss: not so well if it has deep-rooted weeds such as Dock, Thistles, Bindweed,etc, because they won't be smothered by the new turf, they will just grow through it.

3) lawn does not really need a viable soil structure - if grass were invented now, it would be hailed as a miracle ground cover, which can grow almost anywhere, needs minimal maintenance (running the mower over it once a week - unskilled labour) and provides colour, and a porous surface, all year round.

Of course it is 'better' to have a good soil structure underneath it: and in a perfect world, we would lift all the old turf (setting it aside somewhere for a year in a Loan Stack), dig over the whole area, add organic matter, then relay new turf. But this will take weeks, and will take a lot of hard work (and money). And for a small front garden, especially if you rarely use it, it might be easier to just over-lay fresh turf.